How We Became Jimmy Buffett Fans And ARGH!!! Pirates

In my last blog entry about the Jimmy Buffett concert, I made mention that we saw someone that was dressed in a pirate costume and looked a little like that Jack Sparrow character that is in the Pirates of the Caribbean movies. The pirate at the concert was accompanied by his damsel.
They were standing in the front row of the concert and they kept showing up on the jumbotron screens, that were set up on both sides of the stage.
When I woke up this morning and started to check my email, you will never guess who I had an email from....
None other than the damsel that accompanied that pirate. Actually the pirates name is Skip Fitzpatrick and the damsel is his wife Gretchen.
Gretchen found my blog entry about the concert as she was searching for photos of the Jumbotron that showed them throughout the concert.
Gretchen was nice enough to send me a bunch of photos from the concert, so I figured that it was only fair to share them with all of you.
I also asked Gretchen if she would be willing to share her story about how she and Skip became Jimmy Buffett fans and how that love for all that is Buffett morphed into their own Parrothead look...Pirates.
I usually write my own stories about anything and everything but she wrote her story so well, that I decided to leave it basically as it is and what I will call...The Creation Of Jimmy Buffett Fans, Parrotheads And Pirates.
Here is Gretchen's story in her words:

Here is a photograph of Skip and Gretchen Fitzpatrick 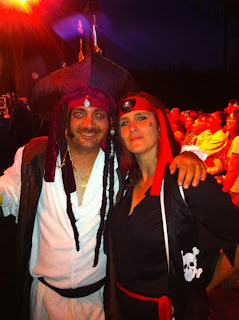 The Jimmy Buffett craze began with my husband, Skip Fitzpatrick. We are both U.S.Navy sailors but he went out on carrier cruises before becoming an air crewman, while I spent my whole career as an air crewman.
It was during his first cruise aboard the USS Carl Vinson in 1994 that he was introduced to Jimmy Buffett’s “Son of a Sailor” and fell into fandom. While we were dating he was always playing Buffett and told me how much he liked the carefree style of the music.


It wasn’t until after we were married (2002) that I found out Jimmy Buffett was doing concerts fairly close to where we were stationed at Tinker AFB in Oklahoma and I surprised him with floor seats to his first ever JB concert and tailgate in 2005.
The floor seats at Pizza Hut Park in Frisco Texas are amazing because it doesn’t matter where the seats are, you’re never in them.
You can walk and dance and mingle with everyone in the open floor space in the middle of the arena.
He vowed we would go to one every year after…and we (or at least he) have.
I missed one due to military/family business.
Our last concert in Texas was 2010, I had just retired and we were moving a month later to VA for my husband’s last set of orders.

We were a little upset about the new orders to Virginia because the Jimmy Buffett concert wouldn’t be the same.
We didn’t even know that he hadn’t been playing here; we just assumed we would find the closest one and go.
How ironic that the year we move here would be the year he came back. It’s almost like he followed us..(that’s what we tell ourselves).
We looked at the VIP package but it seemed so separate from the crowds that really make a JB concert what it is so we opted to just get the best seats available on the floor and enjoy the festivities beforehand with the people.
We were shocked to learn that there is no tailgating allowed in VA Beach but were determined to have fun anyway.
In order to get the best seats, you had to wait for tickets to go on sale at the box office so my husband (Skip) got this crazy idea to go down overnight to be first in line.
He spent 16 hours outside the gates and then learned that it was going to be a lottery to draw for a place in line.
He was so upset that it was comical and he just had to laugh at himself.
But fate intervened again and he actually drew number one and got to be first in line after all.

We had arranged ahead of time that he would purchase tickets for the group that was going, so they all wound up with front row seats for the same price as the other floor tickets. Wow!
Four of the people had never been to a Buffett concert before (and also had never dressed up as pirates) so it was set to be an incredible night.
We told them they had to dress up as pirates like us so the front row would stand out and we obviously did.
Dressing like a pirate came during our second year.
The first year we went with another friend who said everyone wore grass skirts and leis, so we did. It was a little boring looking like everyone else.
We love the song “A Pirate looks at 40” and Jimmy Buffett always refers to loving pirates growing up.…so pirates it has been ever since and it is so much fun.
Everyone always stops us for pictures, and the pirate talk and saying Arrrrgh all day is fun.
The costumes seem to get more extravagant every year.
I like to keep mine simple because it gets so hot walking around all day before the concert, but my husband loves to go all out (I even do his makeup to match Jack Sparrow). I am the red head with the leopard pants because in true Buffett “life goes on” style, 10 minutes before go time we discovered I left my pirate pants at home and had to carry on with my pajama pants (priceless!!).
Next year I will make sure to have my full ensemble in the bag before husband packs the car HAHAHA.

I think the best part about 2011 was getting to go to TWO Jimmy Buffett concerts. I really wanted the kids (4 sons, age 17, 13, 12 and 7) to experience it before he stopped doing them.
They have been raised on his music all their lives and I didn’t want them to miss it waiting to be adults (no offense Jimmy, just in case).
So we bought lawn seats for the concert in Raleigh North Carolina, and did the whole early in line and run to the front of the section thing. Jimmy Buffett fans are friendly and fun loving so it wasn’t that bad.
No pushing, shoving or rudeness at all; always room for one more at Buffett…hahaha. They were great seats, saw the stage, saw the jumbos, speakers were right behind us so sound was excellent.
Kids had a blast dancing, singing and playing with the beach balls.

We are looking forward to moving back to Oklahoma this summer (Skip retiring now) just so we can go back to the concerts in Texas.
It is a 2 day party before and an all nighter after in the parking lots. People even bring in sand and make their own beach bars.
The coral reef band comes out to the lots and plays a few songs and does autographs (Nadira signed my red and black headband last year…hence it was not on the costume this year).
There are local bands that play throughout and it is a great crowd.
VA Beach is really missing out on that. Can you imagine a Jimmy Buffett beach party…… that would be AWESOME!!!
Come on Virginia, you’re a tourist area…lighten up!

We were so excited to be in the front row this year (2011) in VA Beach, we started counting how many eye contacts we got from the stage, we got up to 9.
He may not remember but we will. My husband was thrilled that Jimmy went out of his way to throw the signature flip flops to “the pirates” and will treasure it (after he stops sleeping with it of course).
Our friend, and fellow Navy sailor, Jessica (blond wig, pink pirate costume) got the other one and I think she stopped breathing for a second.
She also used to be stationed in Oklahoma with us and went to first concert there last year.
Our other friend, and also fellow Navy sailor from Oklahoma, Rob (shirtless w/ tattoos, took off his costume after sweating to death) was there for his first concert and LOVED it.
Our neighbors, Matt and Brandi (blond, male pirate costume with no dreads, and velvet female pirate costume with neck choker) had a blast.
They had never been to one and it was pulling teeth to get Matt into a costume but as soon as he felt the vibe and was asked for a few pictures he had “Changes in Attitude”. They arrived late and missed the picture with us on at the red carpet screen but they went to lunch the next day at Cheeseburger in Paradise in Newport News and the waiter recognized them from the jumbotron…how cool.
I think we will see them in costume every year now too. Skips sister Bridget came in from Richmond (the blond one in the tan and green pirate wench costume) and enjoyed her first Buffett concert.
The only one missing was “pretty boy” Josh Tanner who gave us the first tickets in 2005.
He had to attend the concert near San Diego this year where he got stationed.
Missed you Josh… 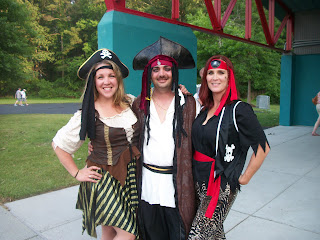 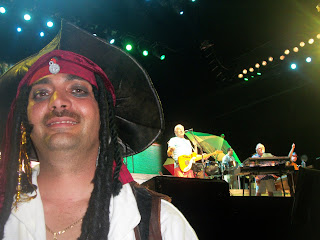 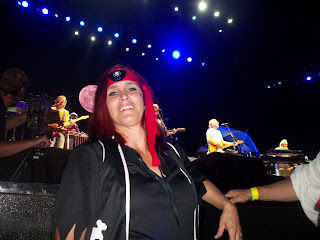 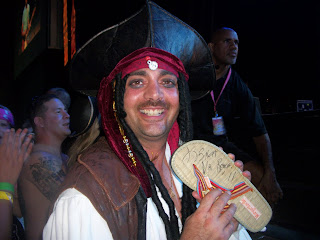 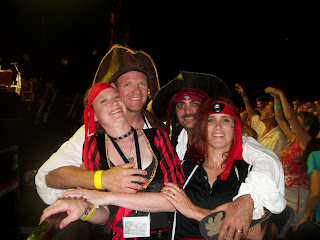 In the group photo in front of the stage during the concert are as follows top to bottom, left to right: 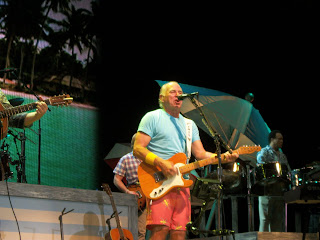 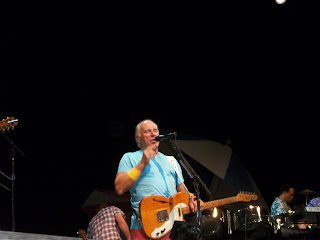 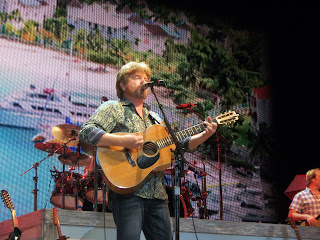 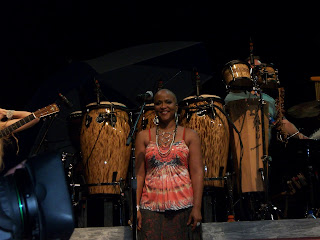 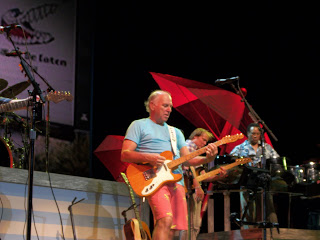 Posted by Rick Rosenshein at 5:48 PM

Y'all had so much fun! Brought back memories of our first JB concert this year. Hawaiian and Buffett shirts are as far as we went but who knows .... maybe next time! I agree - Virginia Beach is missing out. Can you imagine it now - jumbotrons on the beach!