This years AMC Outer Banks Relay for Life Event has concluded. Once again the weather prediction people got Saturdays forecast all wrong...which was such a blessing compared to what they originally forecasted. Originally it was supposed to be rainy all day on Saturday.
It was plenty windy which made putting up shelters and tents quite a chore, along with keeping everything on top of the tables. The windy definitely kept us on our toes but the great thing is that it didn't rain and the sun was actually out on Saturday. The wind kept the temps down and I was one of the few that had shorts on. Needless to say, the t-shirt and shorts weren't on for long and before you knew it I had changed into jeans and a heavy hoodie.
There weren't as many participants in this years event compared to last year, which was a little disappointing but we were able to make more money for American Cancer Society than we did last year..
In order to generate  and boost my cookie sales, I had to give out a number of samples. Once I gave a person a cookie to try out, almost every single person bought at least one bag.
I had one person buy 10 bags of cookies and then there was this one person that was eating a cookie from a different vendor/booth. Once he tried my cookie, he bought a couple of bags and gave away the remaining cookies from the other vendor/booth to his young daughter. I saw him happily munching away on the cookies I made as he walked away from our tables.
We also had one of those bouncy air filled house things that you can rent. This thing was huge and we had quite a number of kids of all ages in it at various times.
Most of those that worked our booth/tables stayed over night.
We started getting ready to sleep after the luminary ceremony was concluded. There were luminaries all around the outside edges of the High School track. They also read out the names of those cancer survivors that celebrated another birthday and the names of those that had passed away...in memory of....
The ceremony is a somber event and this year I noticed that there were many more luminaries, with family members/friends name on each lit up luminary, around the track and the names being read off of those celebrating another birthday and the names in memory of, were much longer than last year.
Veronica and I spent the night sleeping in a tent at the event.
Luckily we had no rain that night but the weather turned sour on Sunday.
When we woke up it was very overcast and we ended closing up our booth and picking everything up just before the rain came.
Below are photos taken from this  years 2012 Outer Banks AMC Relay For Life Event. 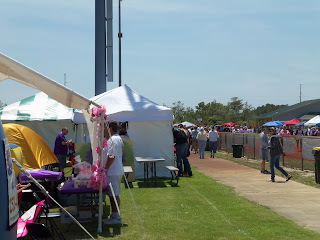 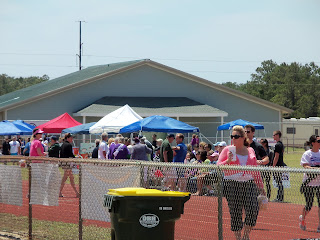 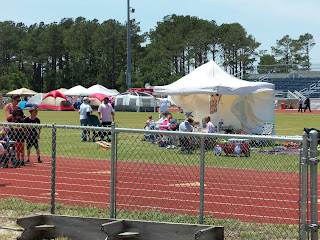 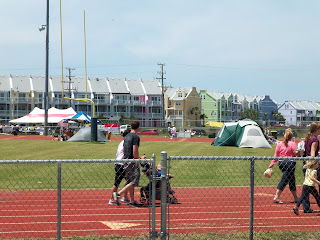 Below...in the background is the big air filled bouncy house thing that we rented for this event. 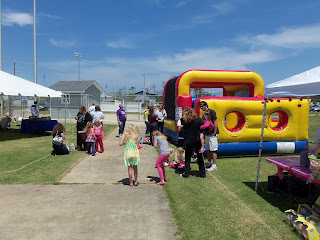 Below is our tables/booth and our tent, which 3 of us slept in over Saturday night. 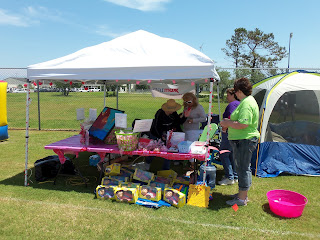 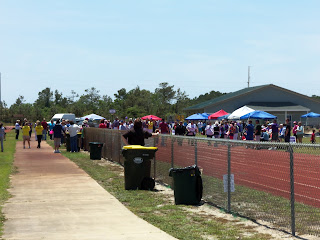 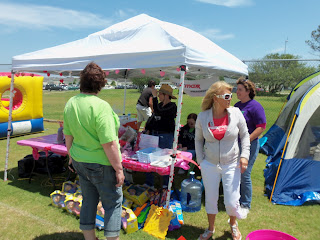 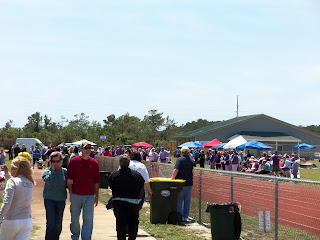 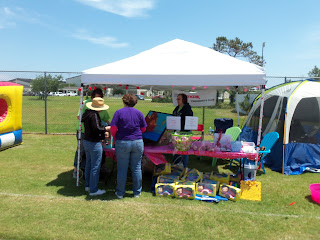 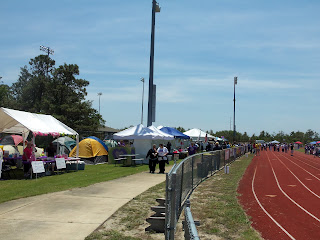 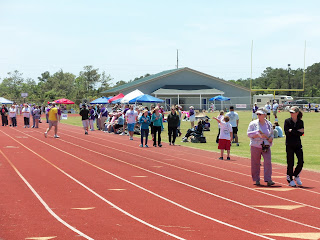 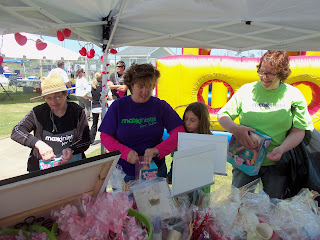 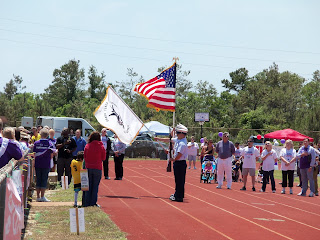 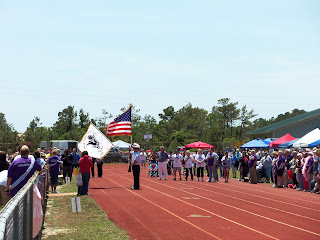 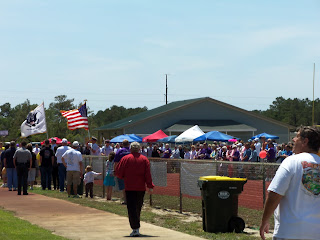 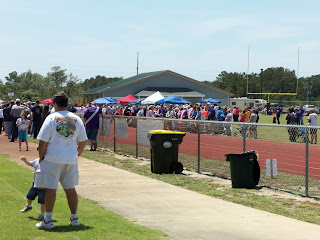 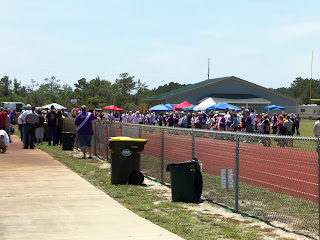 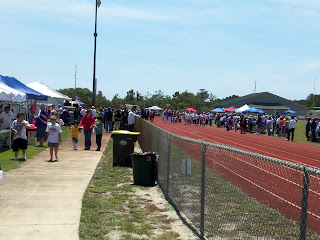 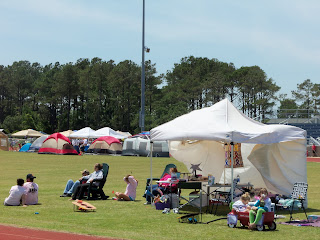 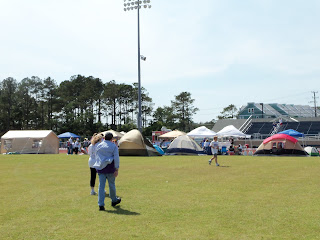 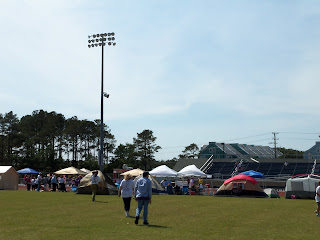 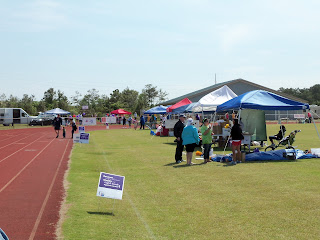 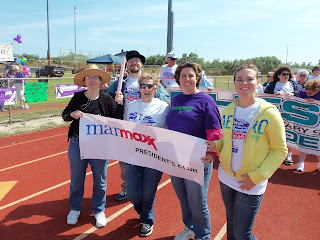 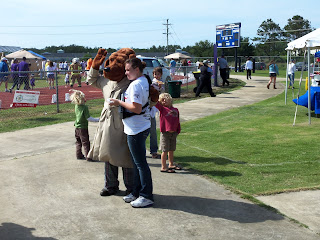 Below are a few photos of the "Hush Angels". At 9PM the Hush Angels come out and sklowly walk around the track. This signifies the beginning of the Luminary Ceremony and at which time the lights are dimmed, you are to quite any sales at your booth/table, you should be quiet out of respect and the announcer reads to names of those that are celebrating another birthday and those whose names are read ...in memory of.... 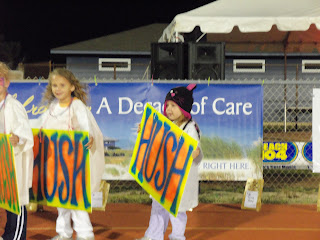 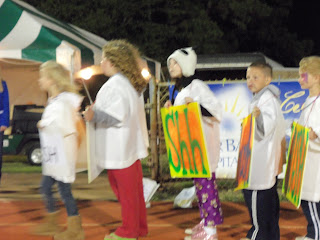 This is something that Veronica and I started in Boston. We have decided that wherever we are, if we think that we are in an important place or somewhere that we want to remember being at, we will locate an object on the ground and take a photo showing both of our feet/shoes. He we were standing on the High School tack where the 2012 OBX Cancer Society Relay For Life was being held.
Previously while we were in Boston. We took 2 different photos of our feet on a manhole cover and on another tile marker...the manhole cover had something like the Boston Sewer System written on it and the other tile that was embedded in the sidewalk had something about "The Freedom Trail" written on it. Unfortunately both photos along with about 100 more, were lost from Veronica's camera somehow. 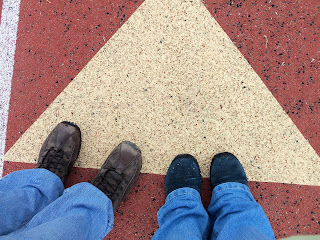 Posted by Rick Rosenshein at 6:36 PM 0 comments Links to this post