Surfs Up Dude And Dudettes

Yesterday afternoon it started to sleet and it kept on sleeting until late into the evening. The sleet then mixed with snow and eventually turned completely to snow. You could actually hear the sleet hitting our bathroom windows.
We woke up this morning to a winter wonderland. This is the most snow we have received since moving to the Outer Banks. We don't see this that often. The most that we had seen in snow before this was maybe 2-3 inches at the most. There is probably 5-6 inches out there and it is still coming down just a little bit.

Below are some photos of what greeted us this morning along with a video. 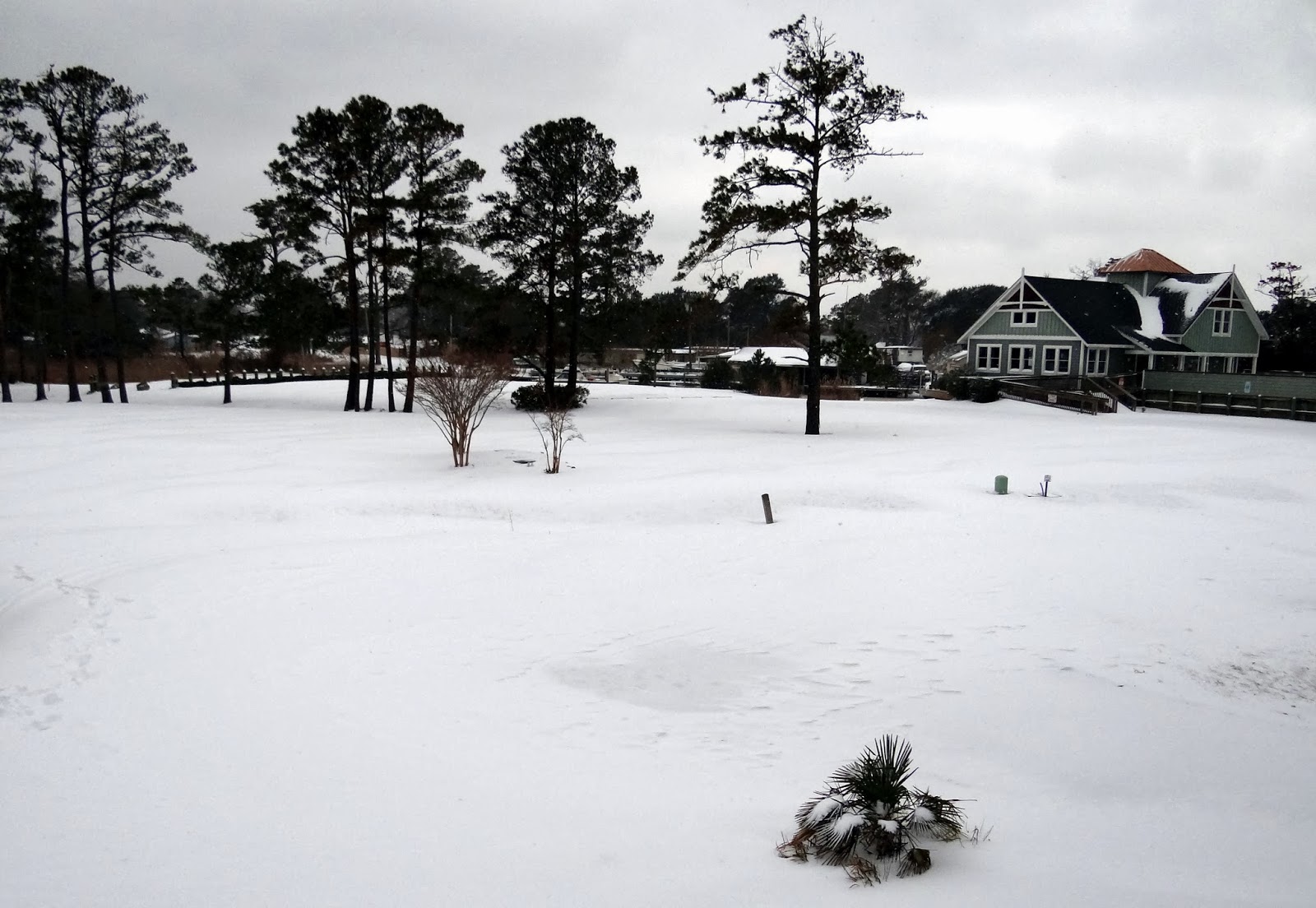 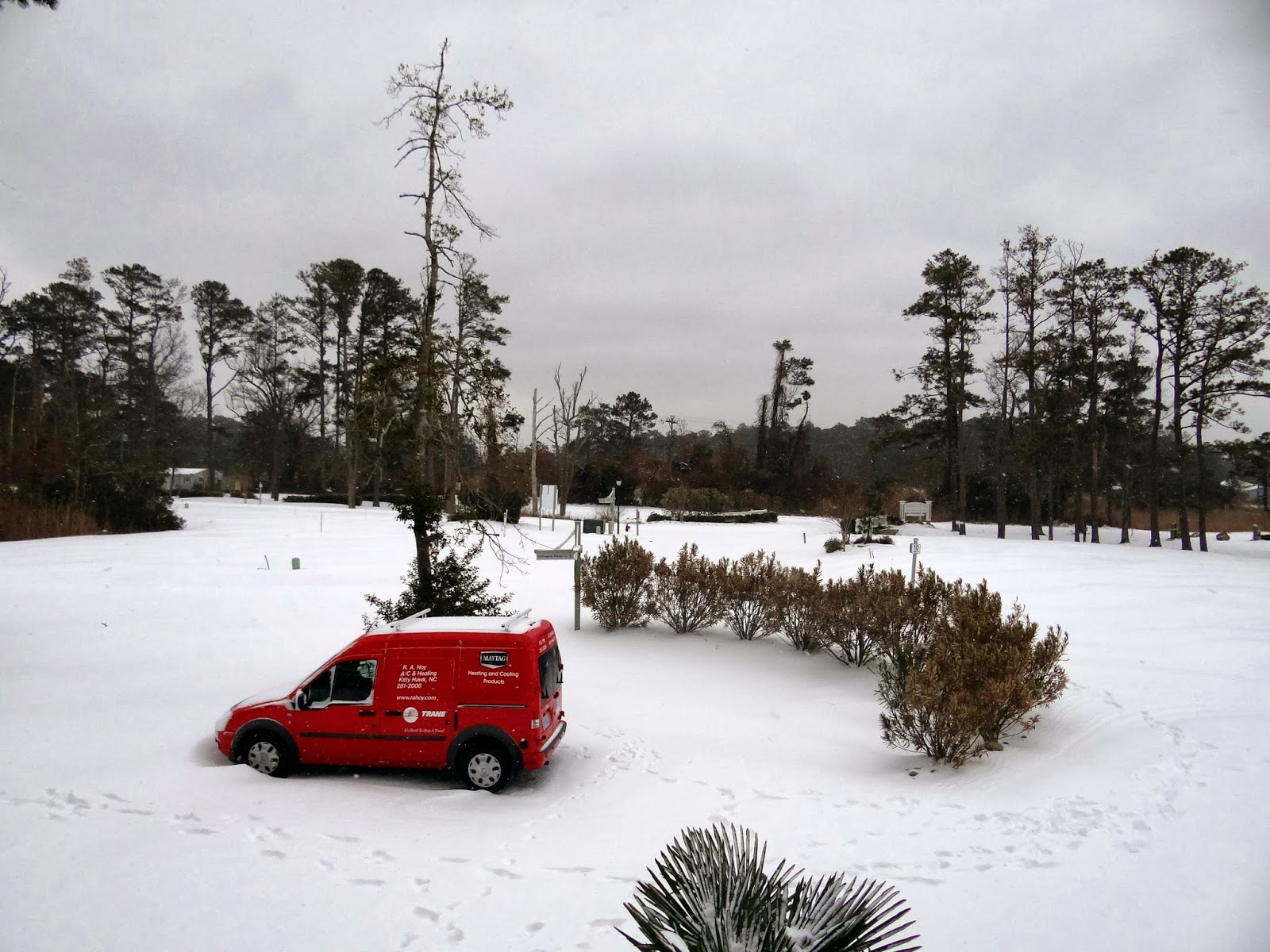 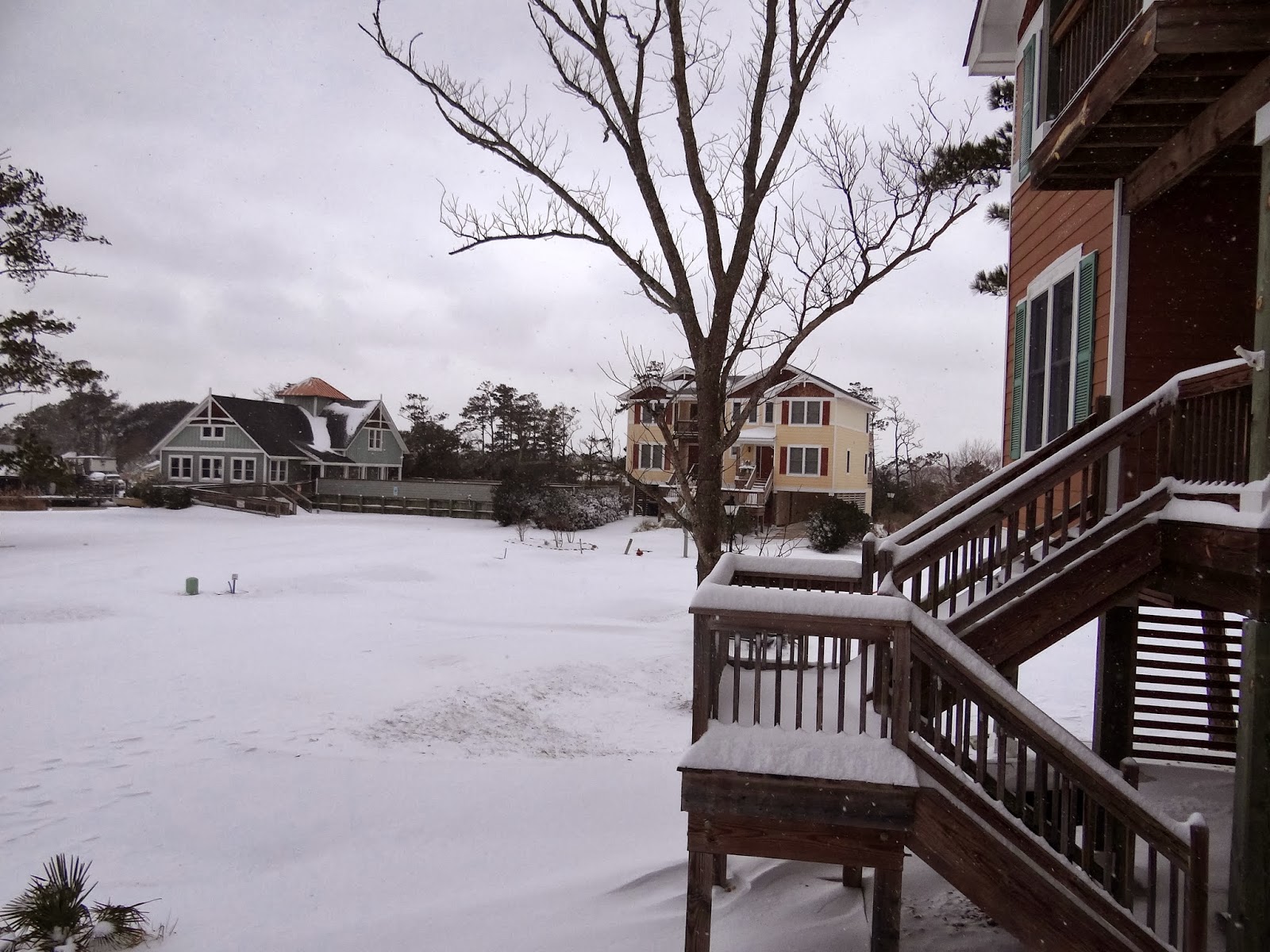 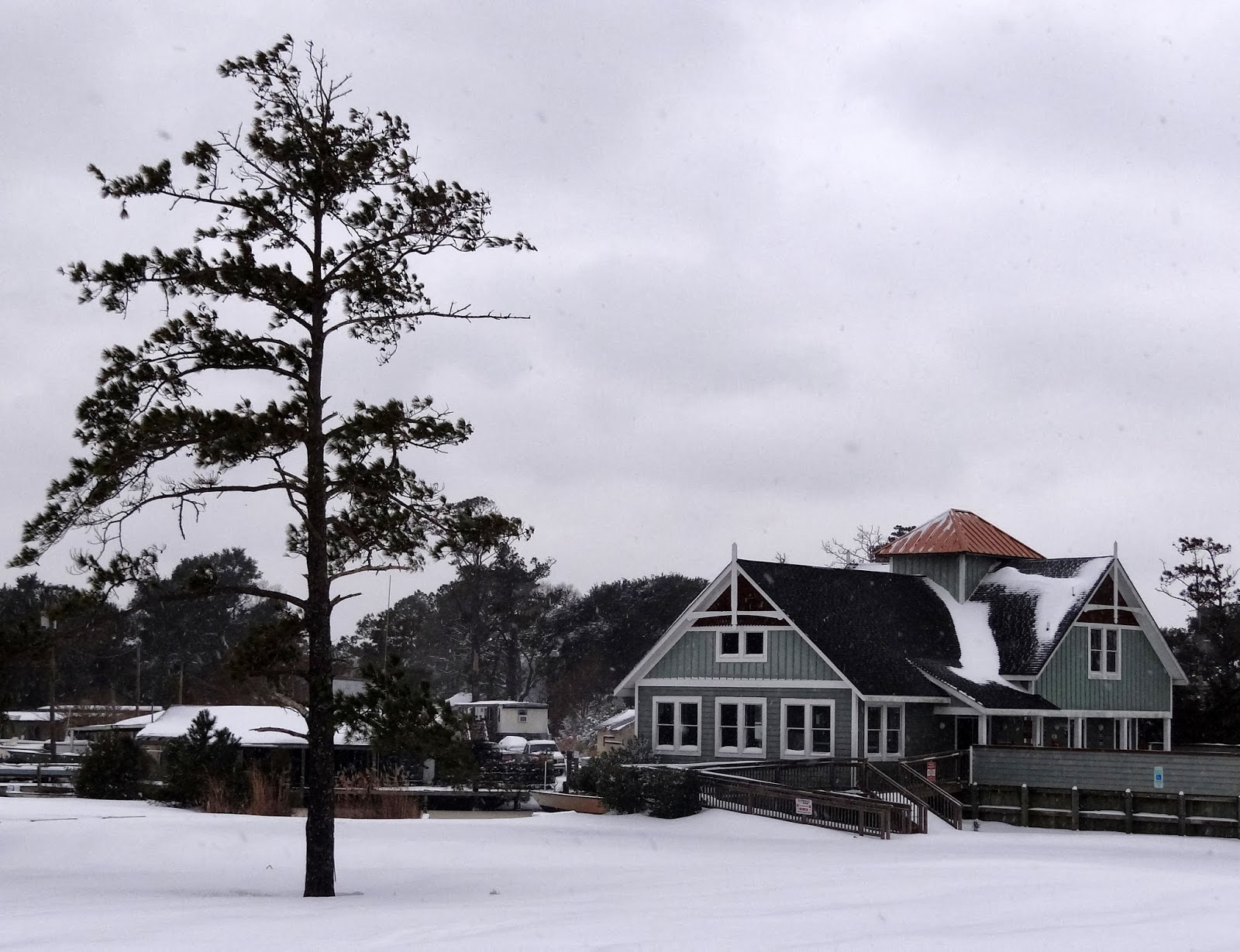 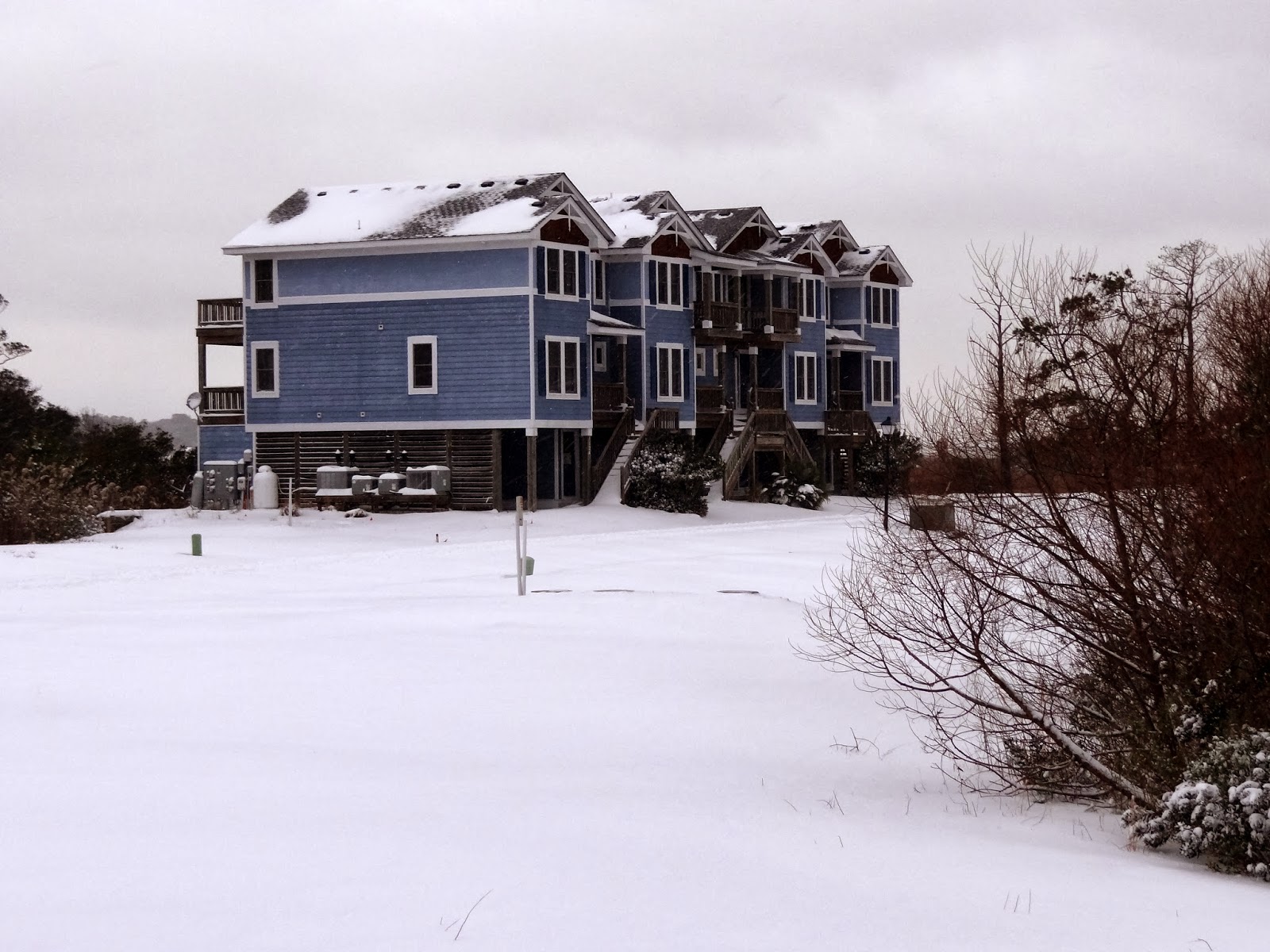 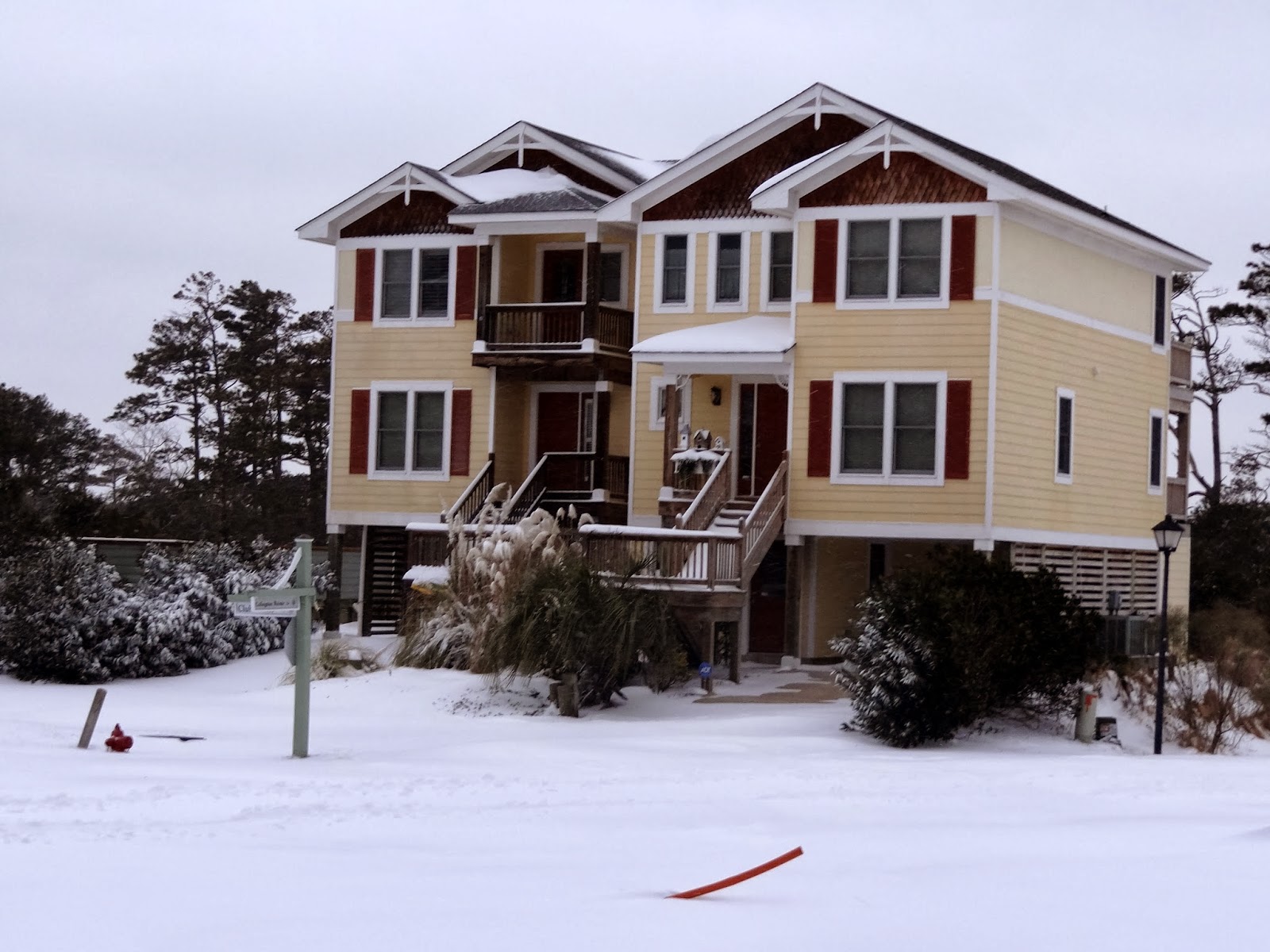 Posted by Rick Rosenshein at 9:59 AM 0 comments Links to this post

Originally Veronica and I were planning on staying in Paris for a few days in October of this year. We were then going to board a train and go to Bruges in Belgium. After spending a few days in Bruges, we were going to once again board a train and return to Paris where we would finish our 2 week vacation.
Due to the cost of riding the rails,we decided to not travel to Bruges, but instead spend our entire 2 week vacation in Paris. Instead of paying for a hotel...they are rather pricey in Paris, we decided to try something different. We are now planning on renting a studio,  a regular apartment or a house in Paris. We have heard quite a bit about renting places all over the world as a money saving option compared to getting a hotel. We have checked out several recommended rental agencies so to speak. We will most likely be using airbnb. This is the basics of how airbnb works. First you join and the go through an ID Verification type of procedure:

So basically we pick a location or several neighborhoods and the amount we are willing to pay for a night, week or whatever span of time you want to rent in Paris and refine abnb's search engine for the type of apartment, what is included in the rent for the apartment along with several other factors. You will then be shown whatever apartments, studios or houses that fit your criteria. Interior and exterior photos are shown on most of the listings along with just about anything else you would want to know about the place. Even all of the financial and legal particulars are shown. You can also see a photo of the owner along with reviews and feedback from previous renters.
Veronica and I have just started our search on airbnb. When we really start getting serious about putting in a request for a specific accomodation, we will actually join airbnb..which is actually free.
Whatever fees airbnb has on the rental property, it is already built in to the totals that are shown for the duration of your stay in the property.
It is really kind of a cool way to see a destination and live somewhat as the locals do. We look forward to whittling down our choices and finally contacting the owner to see if they agree to rent the property to us. For us the approximately monetary savings of going through airbnb compared to the cost of a hotel in Paris is around 50%. Of course this all depends on how much you are willing to spend for the rental property...nightly...weekly or for whatever time you want to be in the rental property.
Posted by Rick Rosenshein at 4:59 PM 0 comments Links to this post

Labels: Airbnb, Airbnb in Paris, Paris vacation 2014, Paris Vacation in October and November of 2014, rental properties in Paris, renting versus hotels in Paris

New Adventures Are Being Put Together

It is hard to believe that January is almost half way gone. This time of year always seems to speed by for me.
With the start of a new year, there is the start of new travel adventure planning for us.
I have just started to put together a few upcoming travel adventures.
Last year I promised Veronica that I would take her to Paris. We were originally thinking about going back to Edinburgh, Scotland. There was so much that we did not get to see when we were there on an NCL cruise back in 2012. We were started doing some research on a trip that would let us visit those 3 locations thinking about going to Edinburgh and then taking the Chunnel into London and from there onto Paris. While doing some research I stumbled onto a interesting cruise that NCL has. It is a 12 days British Isles cruise out of Copenhagen and disembarking at Dover, England. Below is the itinerary for this cruise:

Below is a map of where we go on this cruise: 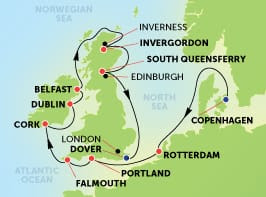 We ended up booking a balcony cabin on the 10th deck. We will be on the NCL Star for this cruise...a ship we have not been on before. This cruise isn't until next September...2015.

For this years adventures I am working on 2 things. First will be a fishing trip to a lodge in Canada that we have never been to.
Clarks Northern Lights Resort  is on Cedar Lake. We have fished on Cedar Lake previously and have enjoyed the fishing there.
Last year I promised Veronica that I would take her to Paris this year. I did some research on various web sites and settled on going through European Destinations in order to put together or at least assit in putting together a Paris centered trip.
We decided to not only do Paris but we will also be including Brusells, Belgium and Bruges, Netherlands in with the Paris adventure.
Originally the package was as follows:
We would have flown into Brussels and then out of Paris at the end of our trip. Because this itinerary would have included "open jaw" airline tickets and knowing that those tickets are usually more expensive that flying in and out of the same city, we decided to make a few changes to their package.
We decided to fly in and out of Paris.
We would fly into Paris and spend 3 nights there...then take a train (which Veronica has never been on) and travel to Bruges...spend 3 nights there and then take another train on to Brussels. We would spend 3 nights in Brussels and then take a train directly back to Paris. Once we returned to Paris, we will spend another 3 or 4 nights there before heading home. We will upgrade the train tickets to 1st class.
We could have got our airline ticket through the travel company for approximately $1,000.00 a piece for round trip tickets. We decided to check out the flights and prices that Delta Airlines have.
We decided that since we each have accrued many Delta Skymiles, that we would use the Skymiles towards out flight ticket costs. You would not believe how much money we saved. We got both of our tickets...round trip from Norfolk, Virginia along with upgrades from Economy to Economy Comfort for approximately $246.00. This really was amazing since the flights are going for approximately $1,200.00 per person.
So far besides getting a great deal on our airline tickets, we booked the last 4 Paris nights at the Hotel La Perle ,  which is on the left bank. This hotel is in a great location...in the heart of the St. Germain de Pris area of Paris and is located near many of the major Paris sites and also fairly close to the Seine River...for those evening Paris lights river cruises.
There is a lot more planning and arranging for this trip and it will be fun and exciting as it all comes together.

Posted by Rick Rosenshein at 6:42 PM 0 comments Links to this post