The Start Of Our Mediterranean Vacation

Well it's early Wednesday morning, 10/09 and Veronica and I are up at 6:10am. We decided to leave the house and head to the Norfolk Airport at 7am.
We hit the local Starbucks before heading out of town and it was raining pretty hard. We had a Nor'easter off the Southeastern coast and we were hoping that the winds and rain would not affect our flight out of Norfolk en route to JFK.
I knew that once we made it to JFK that we would be safe from any storm related issues for the remainder of our trip to Venice.
We arrived at Norfolk around 0930 hours and by the time we got checked in and baggage done, it was about 1000 hours when we got to our gate. We checked the board to see what the status of our flights was and it showed our flight to JFK as being "canceled". Our hearts instantly sunk knowing that we would have to scramble to put together alternate plans to get to JFK in time for our international flight to Venice.
As it turned out, the "canceled" flight was actually a glitch in the computer system and our flight was still good to go.
After boarding the plane, the plane left the gate and then stopped on the tarmac. The captain got on the intercom and told us that we would have to stay where we were at for approximately 30 minutes. We were starting to wonder if all of these things that were going on were actually omens and that we weren't supposed to be going on this trip at all.
As it turned out, everything was fine and we eventually were allowed to take off and we had an uneventful flight to JFK.
Since we had over 5-6 hours to burn while awaiting our flight to Venice, Veronica and I decided to try out the Delta Sky Club at the JFK International Terminal.
After paying $25 a piece to get into this "club", Veronica and I soon decided that it was a waste of money.
If you wanted anything serious to eat or drink, they charge you top dollar. So what did we get for our money. Well we got to sit in our choice of several rather noisy large rooms in which some of them were served a few crackers and nibbles and bits, free soft drinks, a few cut up veges and free wi-fi.
After being there for a bit, we left and got some real food in the terminal.
We ended up waiting near our gate for our flight to start boarding.
When Zone #1 was called we boarded the plane and found our way to our seats in aisle 13...Economy Comfort...for which we paid a few more dollars so that we would have more leg room, wider and deeper seats along with a few additional amenities.
Our flight took off around 2037 hours. Veronica and I stayed up long enough to have our in flight dinner of chicken and mashed potatoes.
After eating dinner, we decided to try to get some sleep around 2300-2330 hrs...which is our normal bed time.
We decided to try to stay on as much of our normal schedule as possible in order to ward of any effects of jet lag when we arrived in Venice.
We had plans when we arrived in Venice to get our bags, catch a bus, go directly yo our hotel, drop off our bags and hit the streets of Venice. So we wanted to be as well rested as possible and did our best not to deal with jet lag. 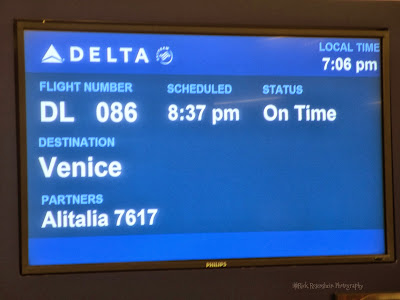 The happy go lucky adventurers in their Economy Comfort seats 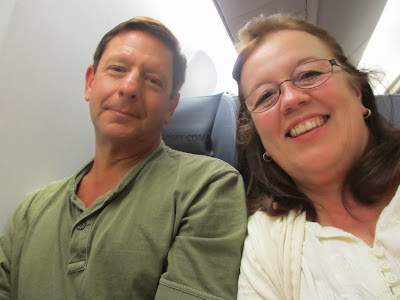 Up up and away...the city lights on New York 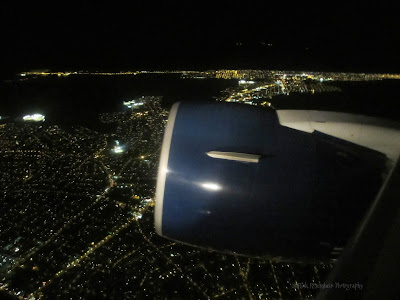 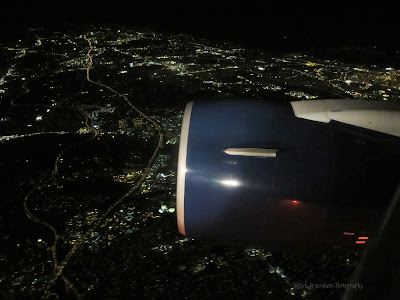 Its morning already...wow time flies when you are crossing the "big pond"....NOT!!!!...best to sleep through it, which we did. We went to sleep around 11:30 our regular time to keep on as close to a normal sleep schedule as possible. We figured that it would help with the jet lag issues and it actually helped quite a bit. 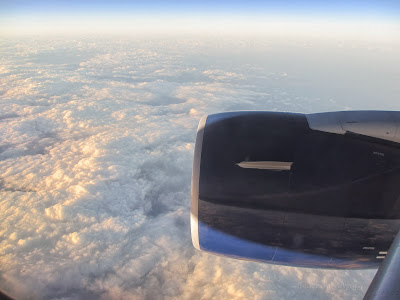 I believe that this is part of the Alps 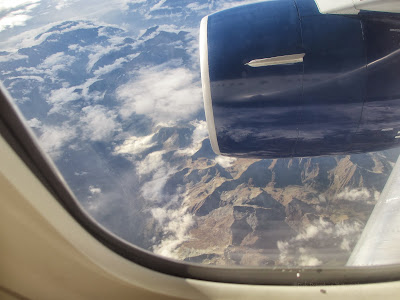 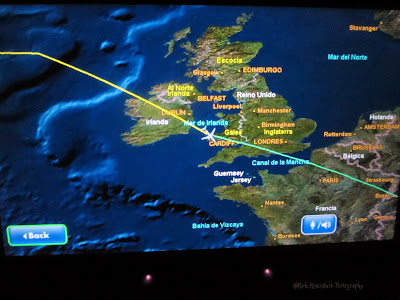 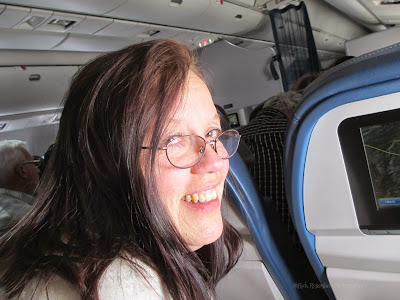 Posted by Rick Rosenshein at 3:38 PM 0 comments Links to this post