The Mad Scientist Has Returned With Something Better Than Before

Around 12/23/14 I read about an upcoming art show that was scheduled to actually start on 2/21/15. This art showed was being presented by the Dare County Arts Council...DCAC. This is the same organization that presented the Mollie Fearing Memorial Art Show last May. That was the very first art show that I had ever entered and my piece of art...Veronique won a blue ribbon of excellence and a $250.00 check.
The upcoming art show is much bigger that the last one I entered. This art show is the Frank Stick Memorial Art Show and it was started in 1978 by Dare County Arts Council to honor Mr. Stick, a renowned local artist and environmental crusader. His illustrations and paintings became popular in the early part of the 20th Century. Now in its 37th year, this is the oldest visual art show in Dare County.
Since this is the longest running art show here locally and the level of talent that most likely will be attending, I decided that it would probably be best to not rest on my lucky laurels and blue ribbon from that last art show.
I pulled Veronique off of Veronica's dresser where it sits and took a good long look at it.
well before I knew it those creative juices started to flow. I came up with a somewhat ambitious plan to make Veronique an even more special piece of art. My plan was also going to be and actually ended up being a rather difficult task due to what I was planning on doing and adding on. And although at times it turned out to be quite a bit of trial by error...heavy on the errors...I plugged away and learning from the most famous "make do guy"...you might have heard of him...MacGyver of television fame, I ended up  with a piece of art that I am more proud of than I am/was of the original Veronique.
Today I took my artistic entry into one of our local galleries......the Ghost Fleet Gallery...handed over my entry fee and setup Veronique for this next upcoming art show.
The actual judging of entered work will be done this upcoming Saturday. Saturday evening there will be an open house at the gallery with food, music and the winners to be announced at that time.
Who knows how I will fare against these other artists but win, lose or draw....I feel good about my latest creation and when you come down to it...it's ART.
Here are several photos of my latest creation:

Several things that every artist needs, phones, coffee and triscuits 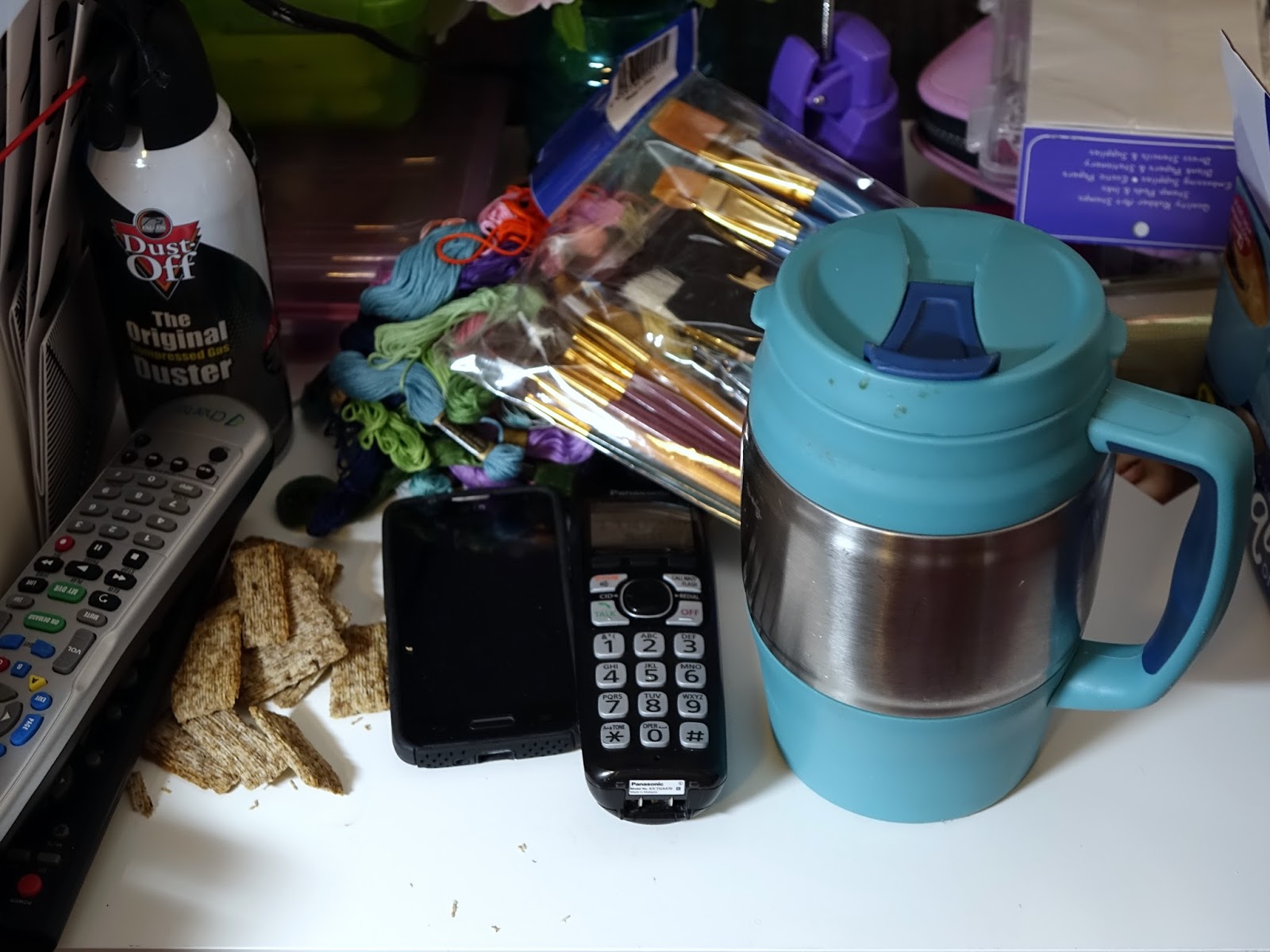 Yeah I know...what a mess 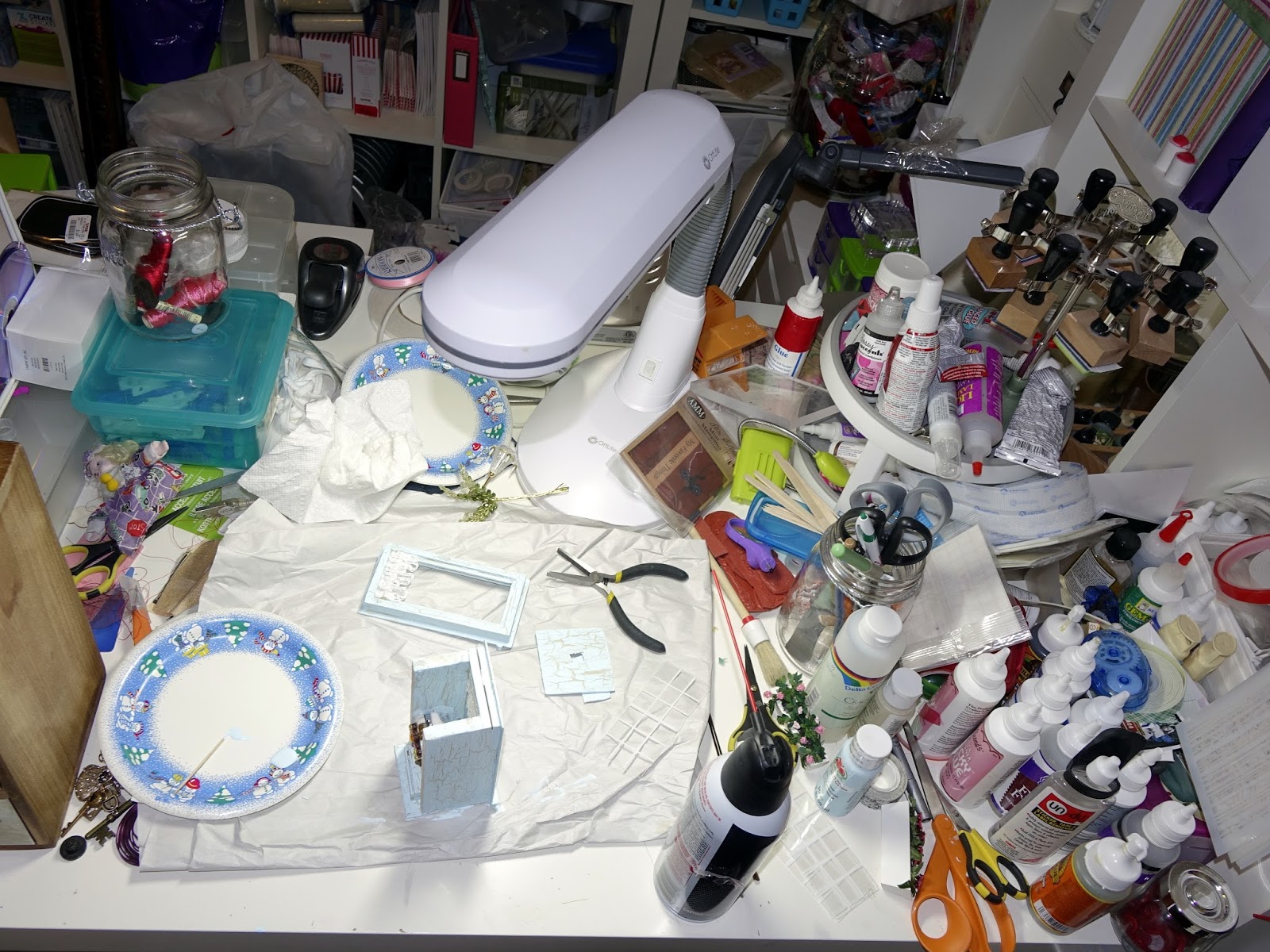 I made a wooden box out of balsa wood so that it would be lightweight. In the box was a cool looking kitty face and on the opposite side of the cat face is a mirror with a crown attached to the top. If you stand just right and at the perfect distance your face will show up on the little mirror and the crown will appear to be on your head. 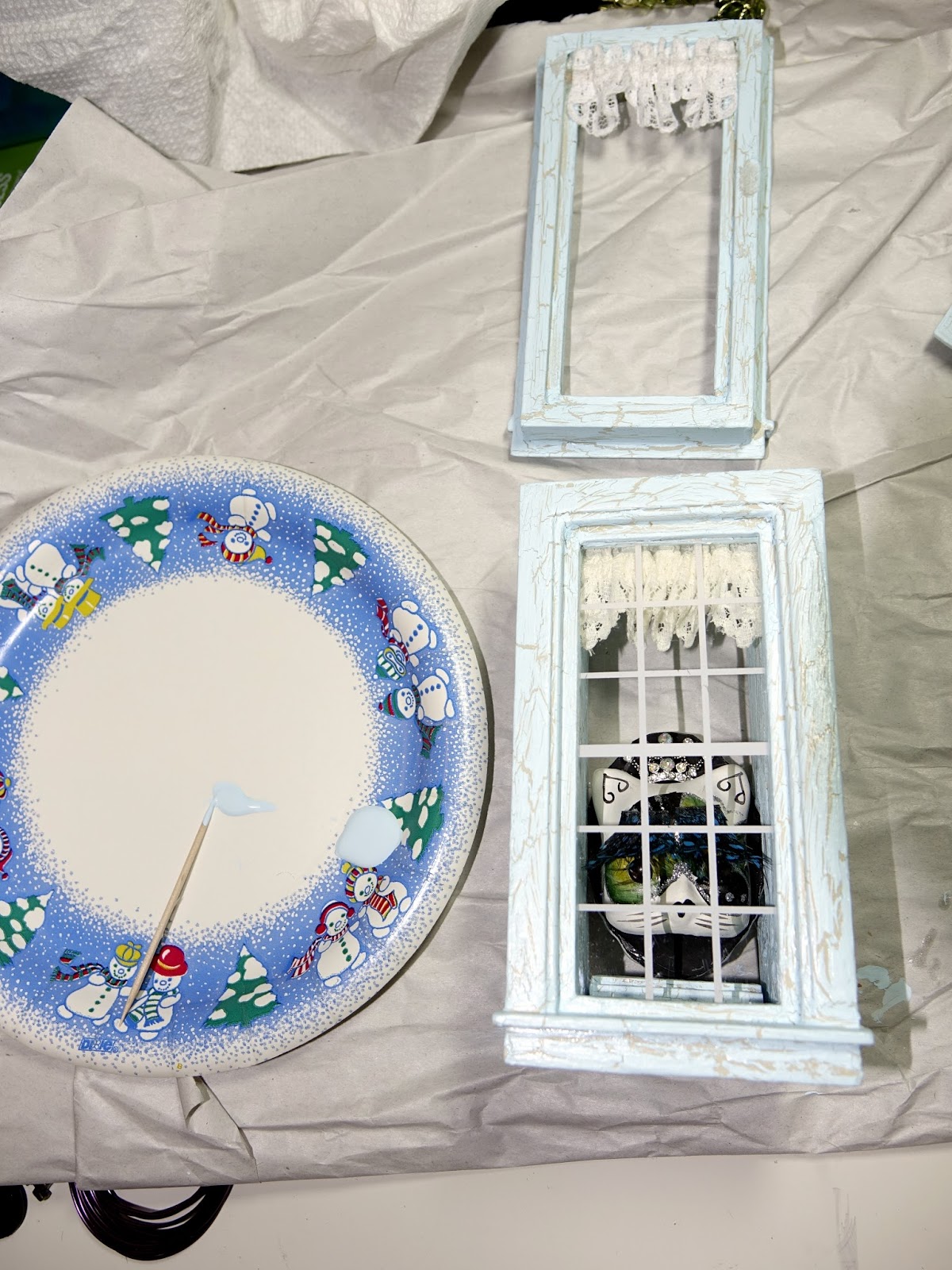 I used a metal females body dressed in a corset and attached small dolls arms and legs making an articulated body. this articulated body would hang from 2 hooks that were built onto the box I made. It would make the cat head in the box appear to be joined to the rest of the articulated body that was hanging below by use of those hooks 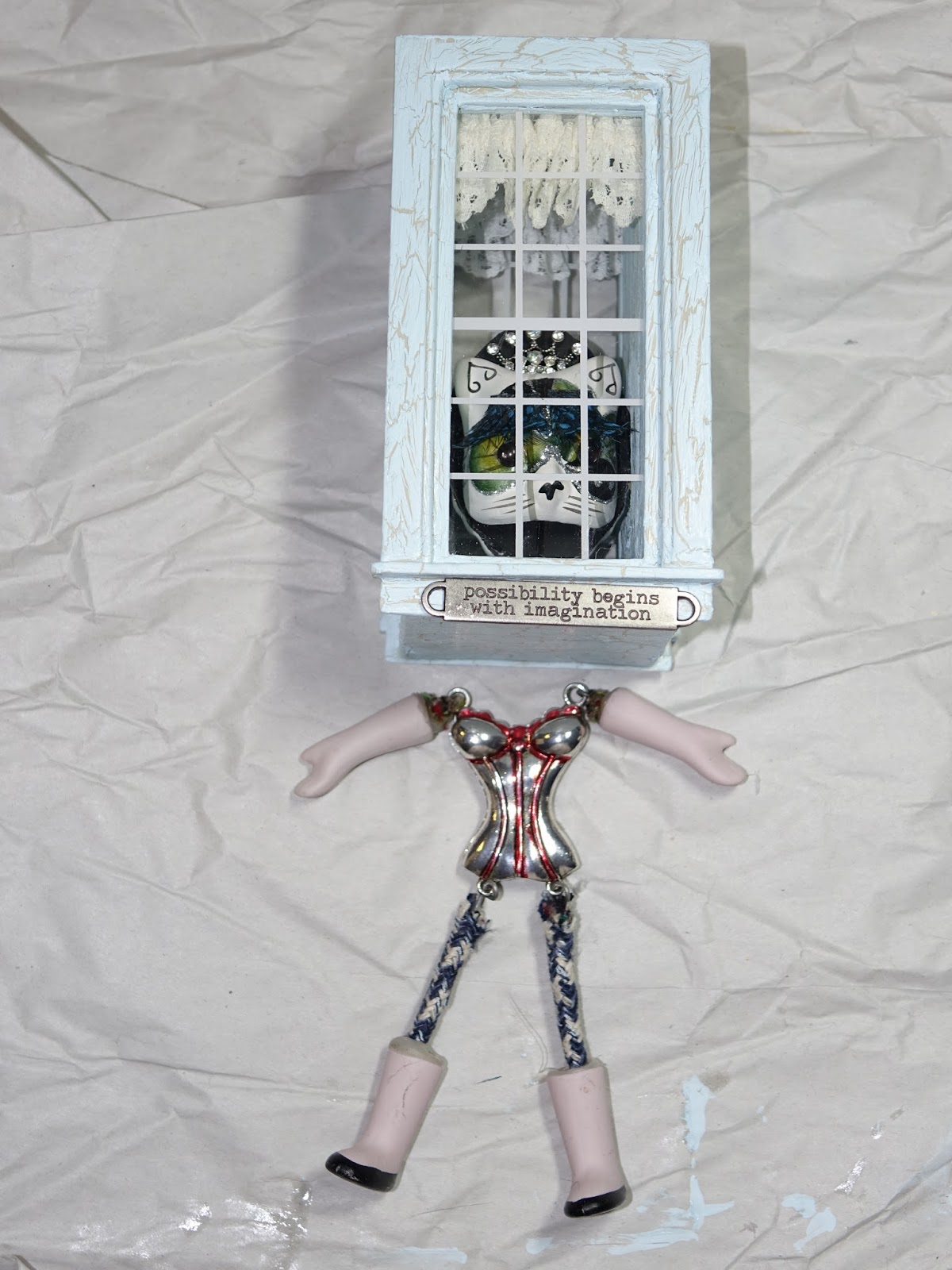 I bought a miniature dollhouse chandelier and attached it to the top of my homemade box. 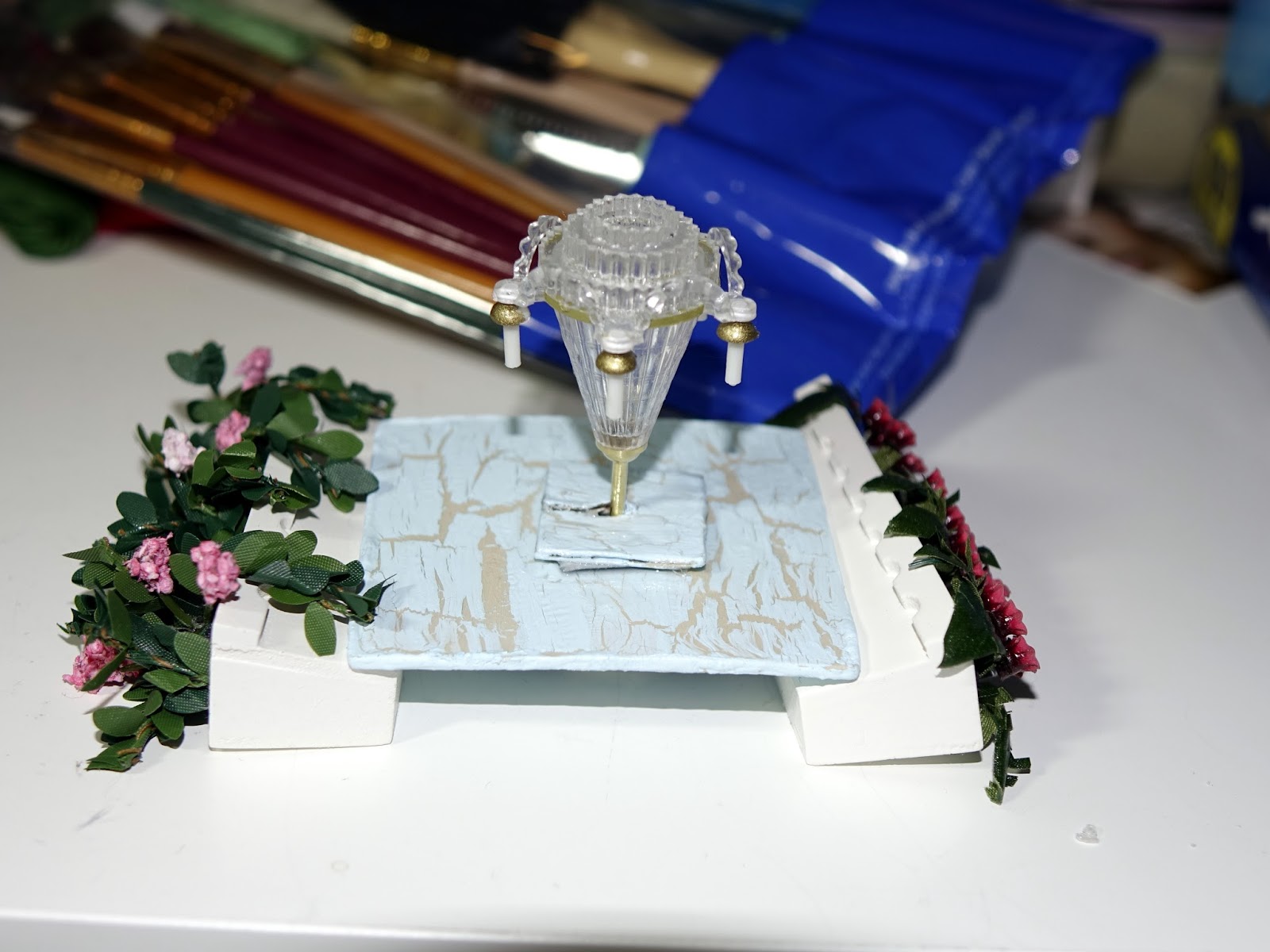 I got everything lined up inside the box and then took the top of the box, which had the lighting fixture and I turned the top upside down so that the lighting fixture was now in the box. A little glue here and there and everything was secure. I really with it had been that easy...like I said earlier...trial and error until I got it right. 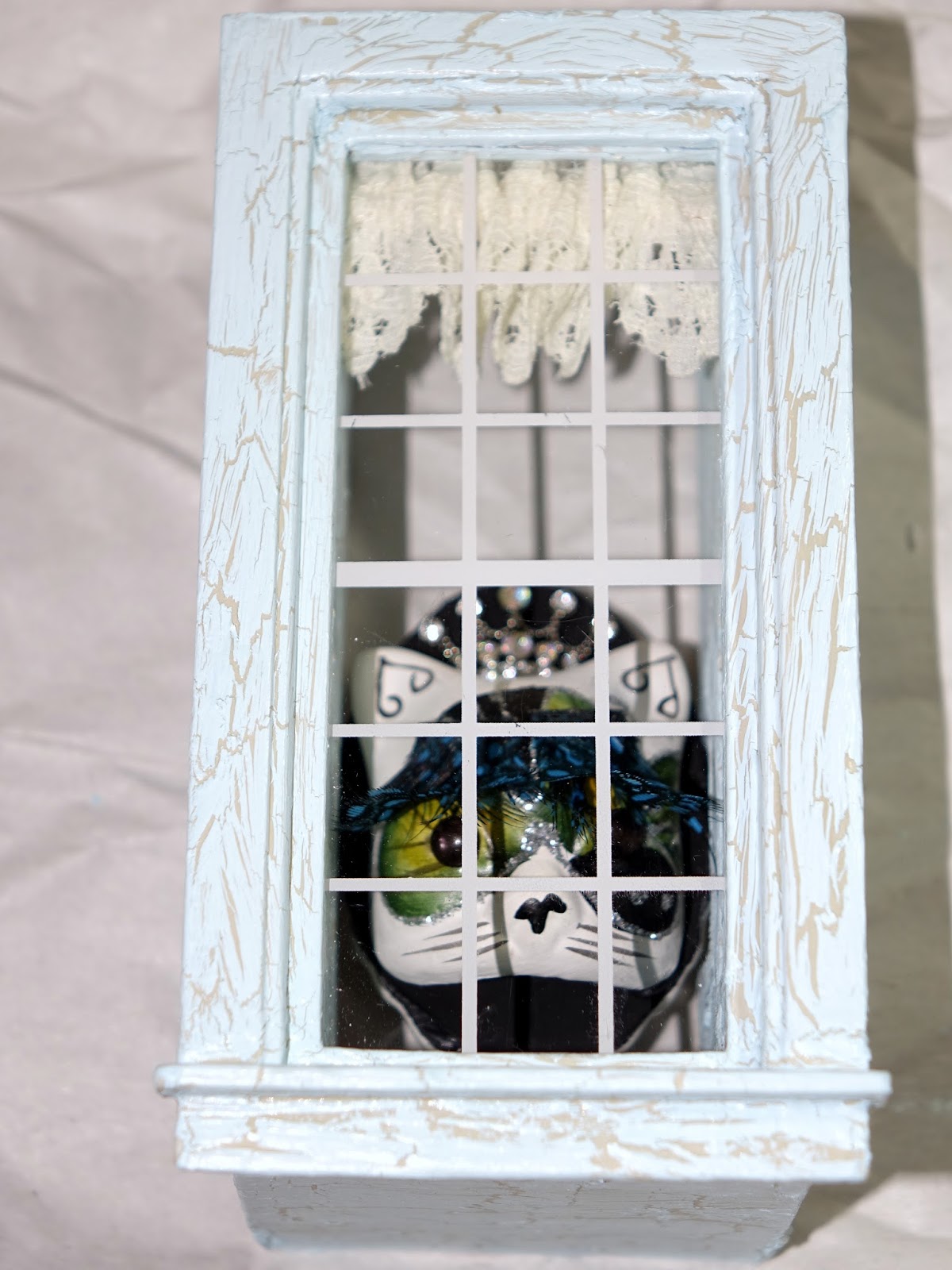 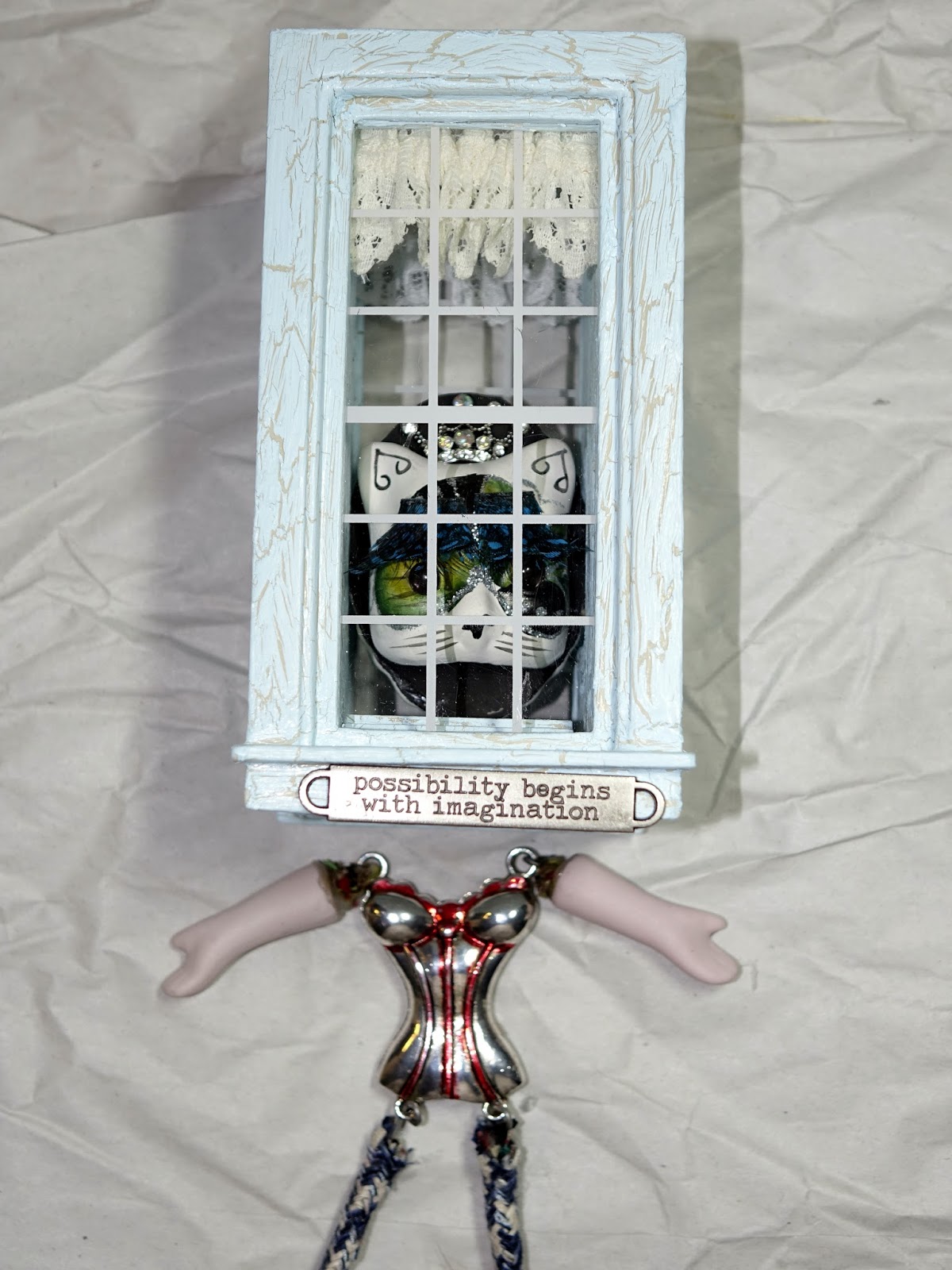 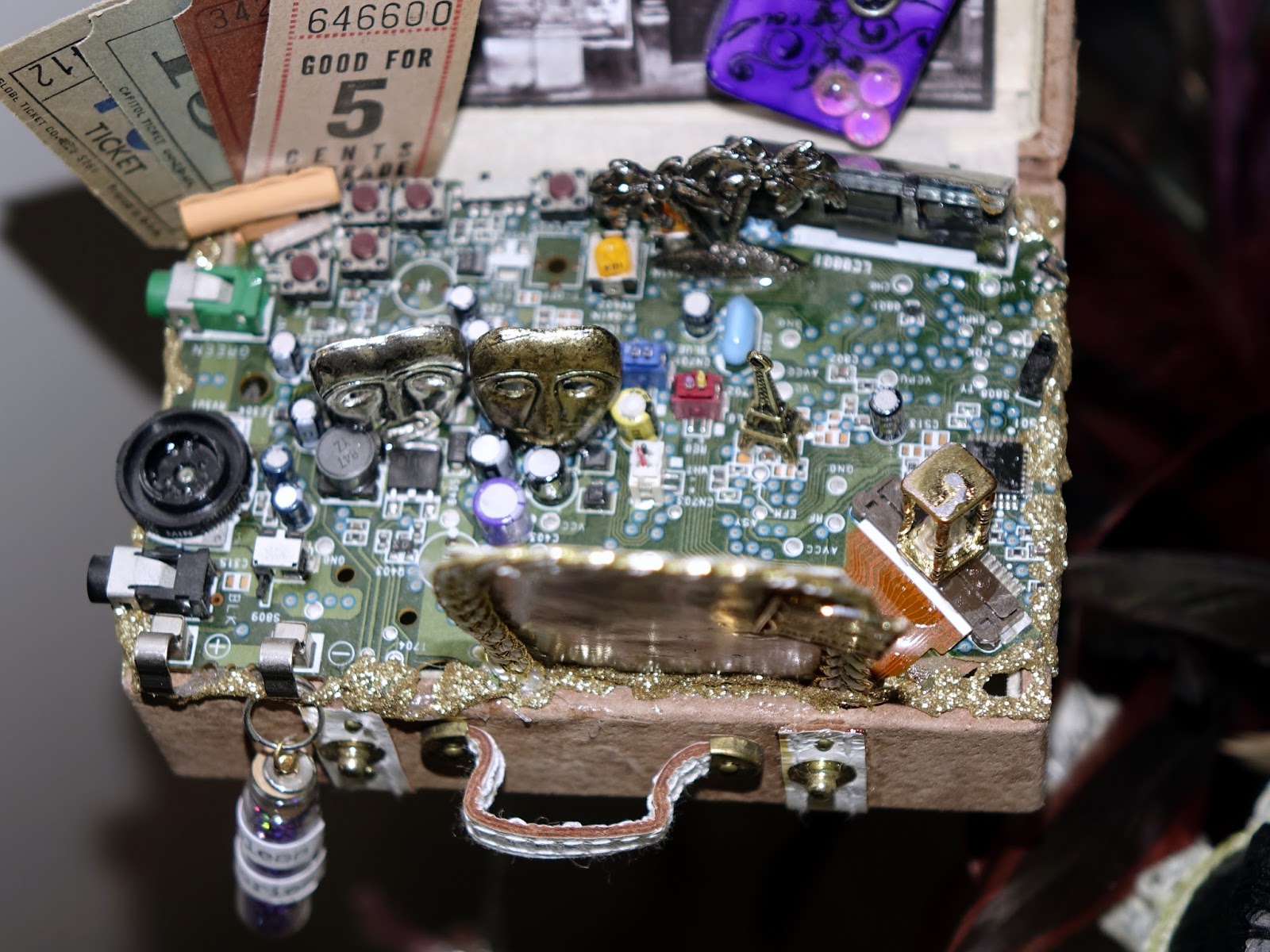 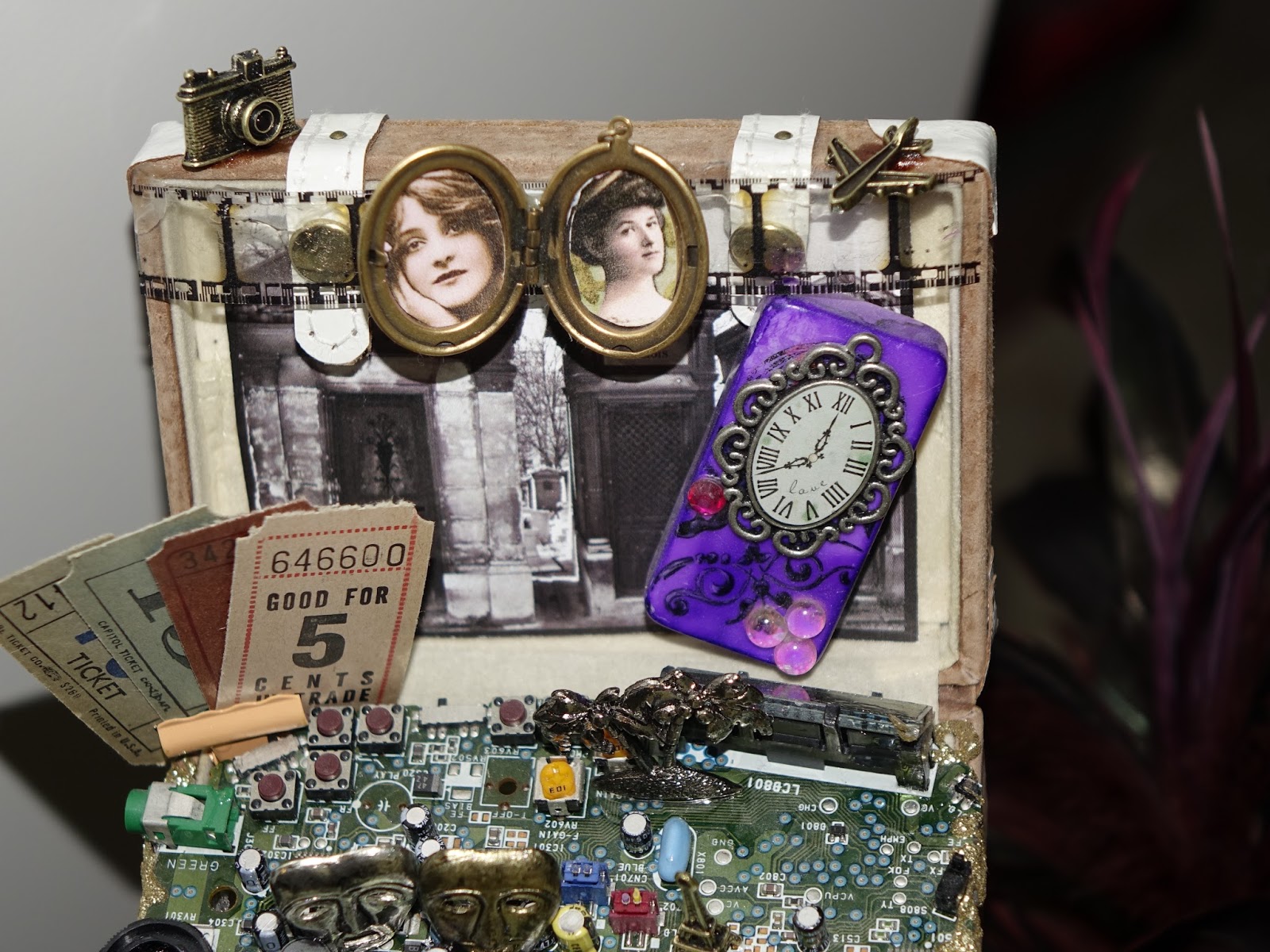 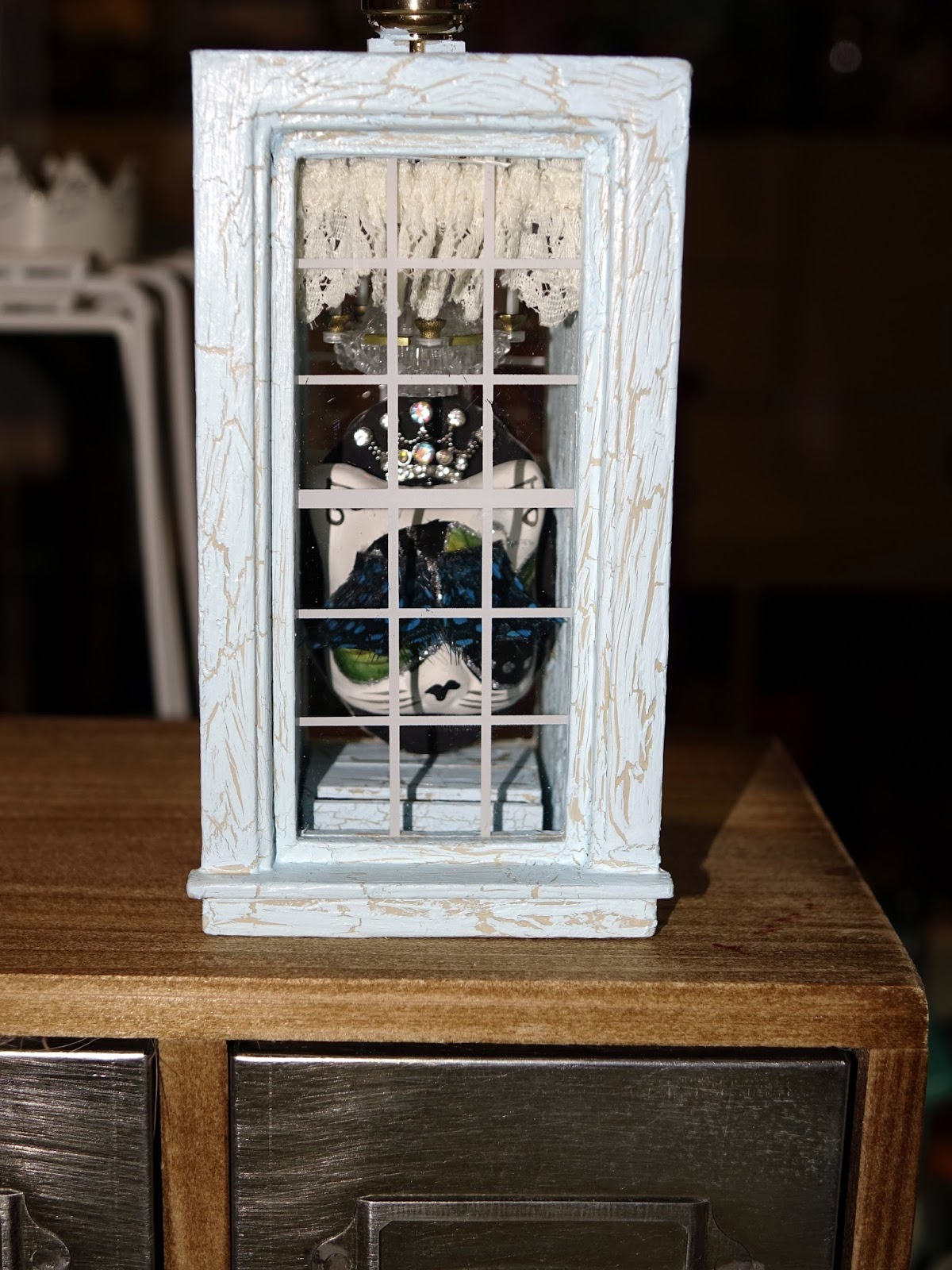 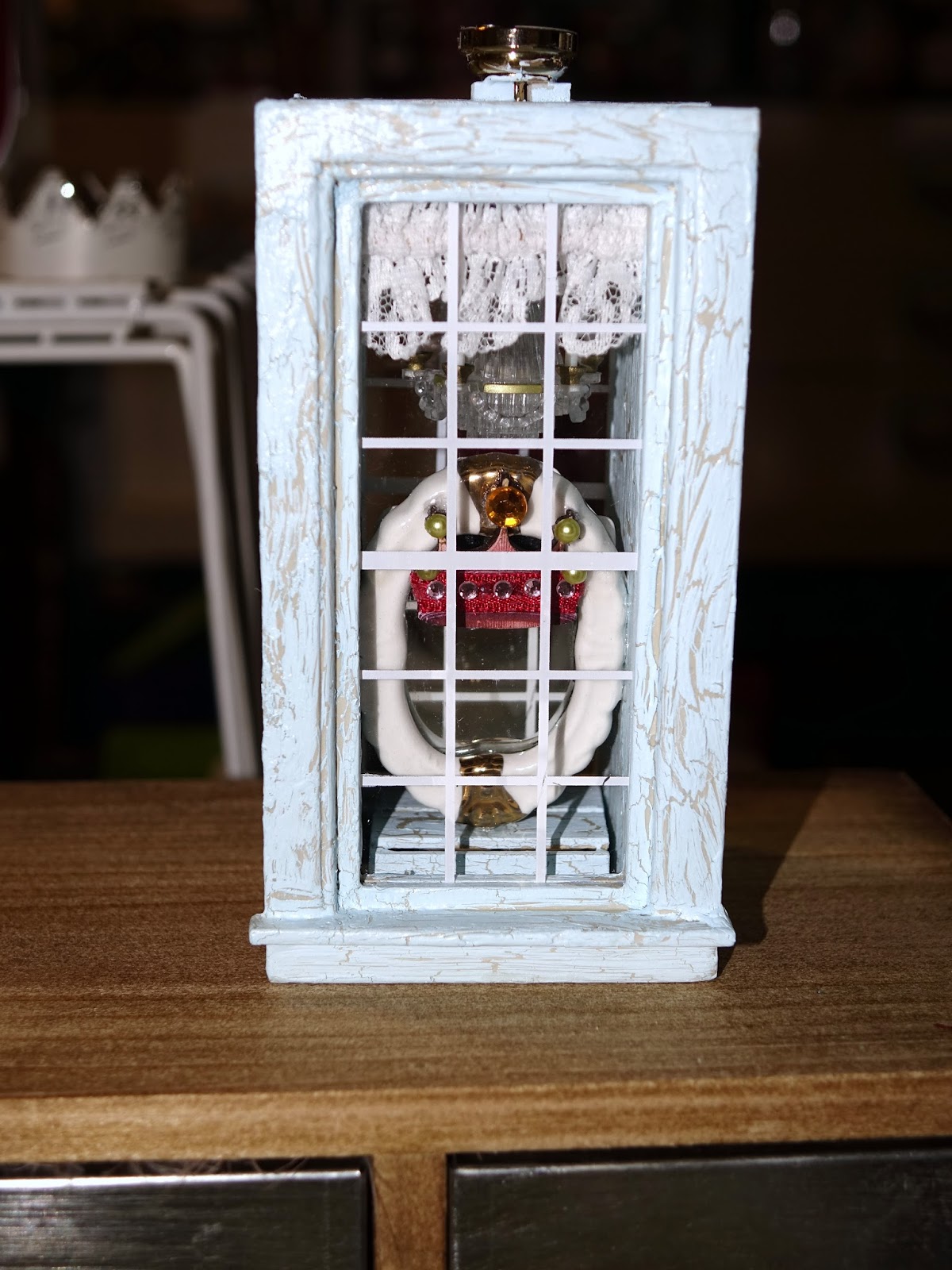 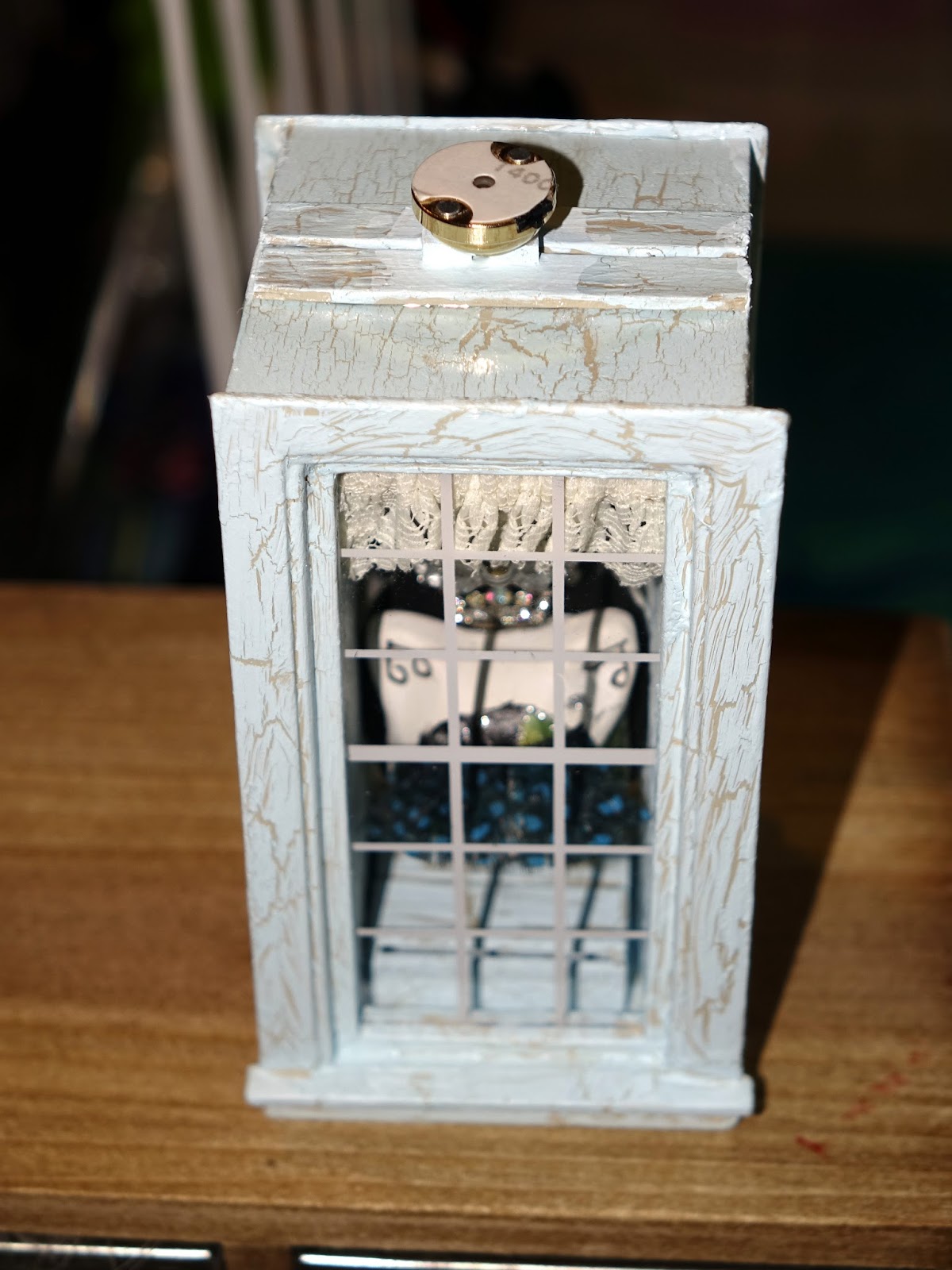 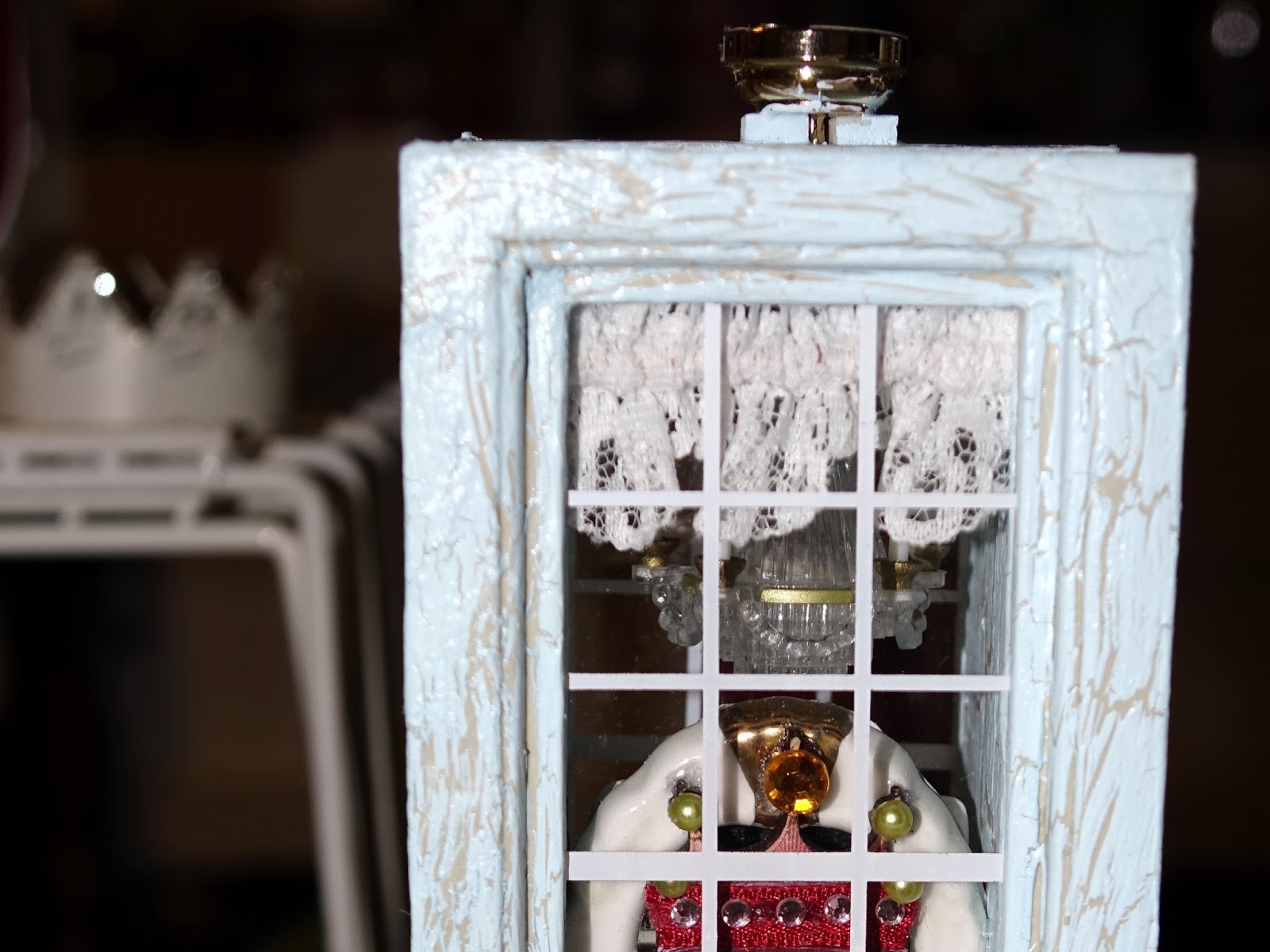 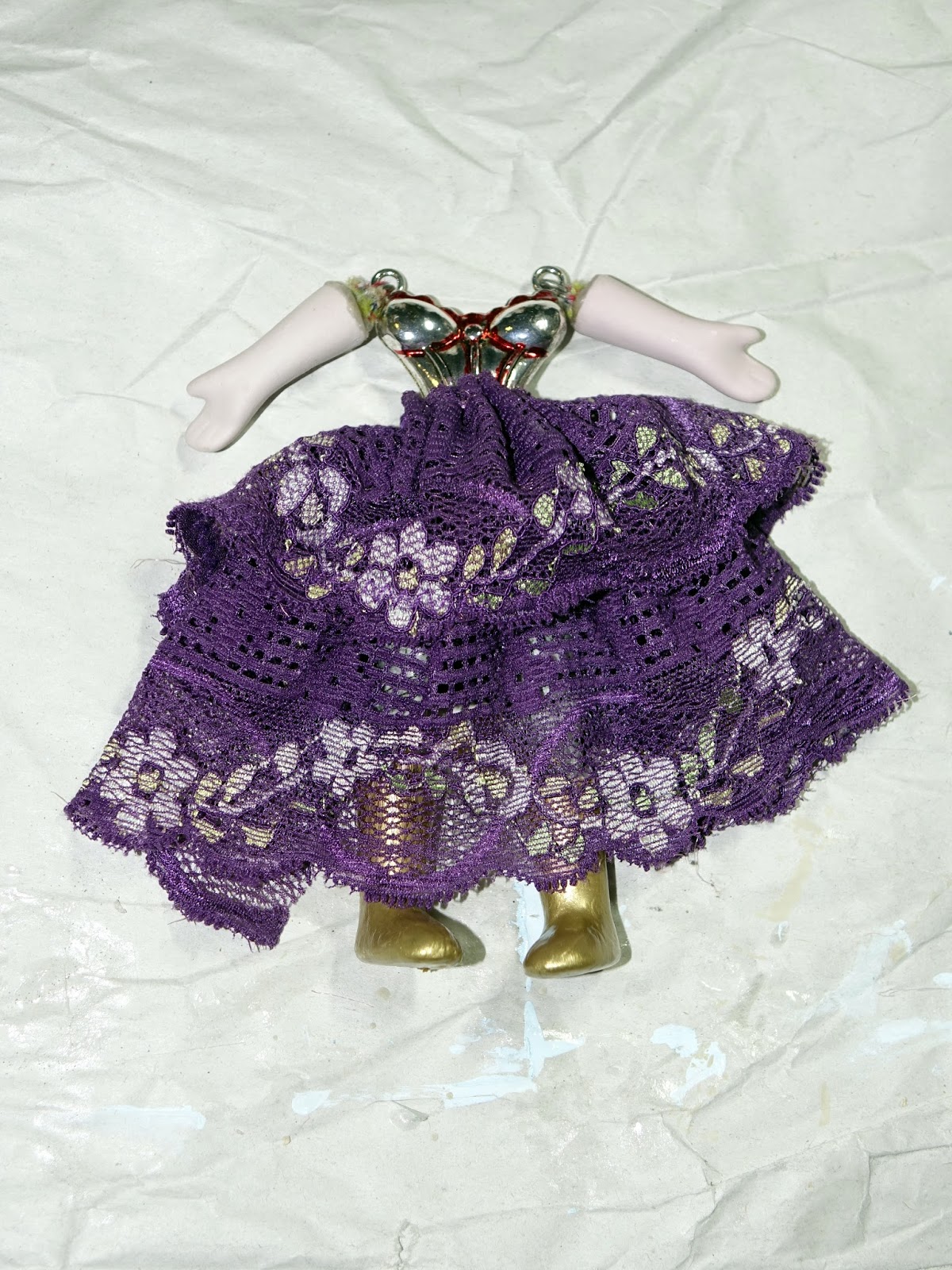 I built up a stabilizing platform on the hand so that the box would be able to be affixed using heavy duty tape and some glue. 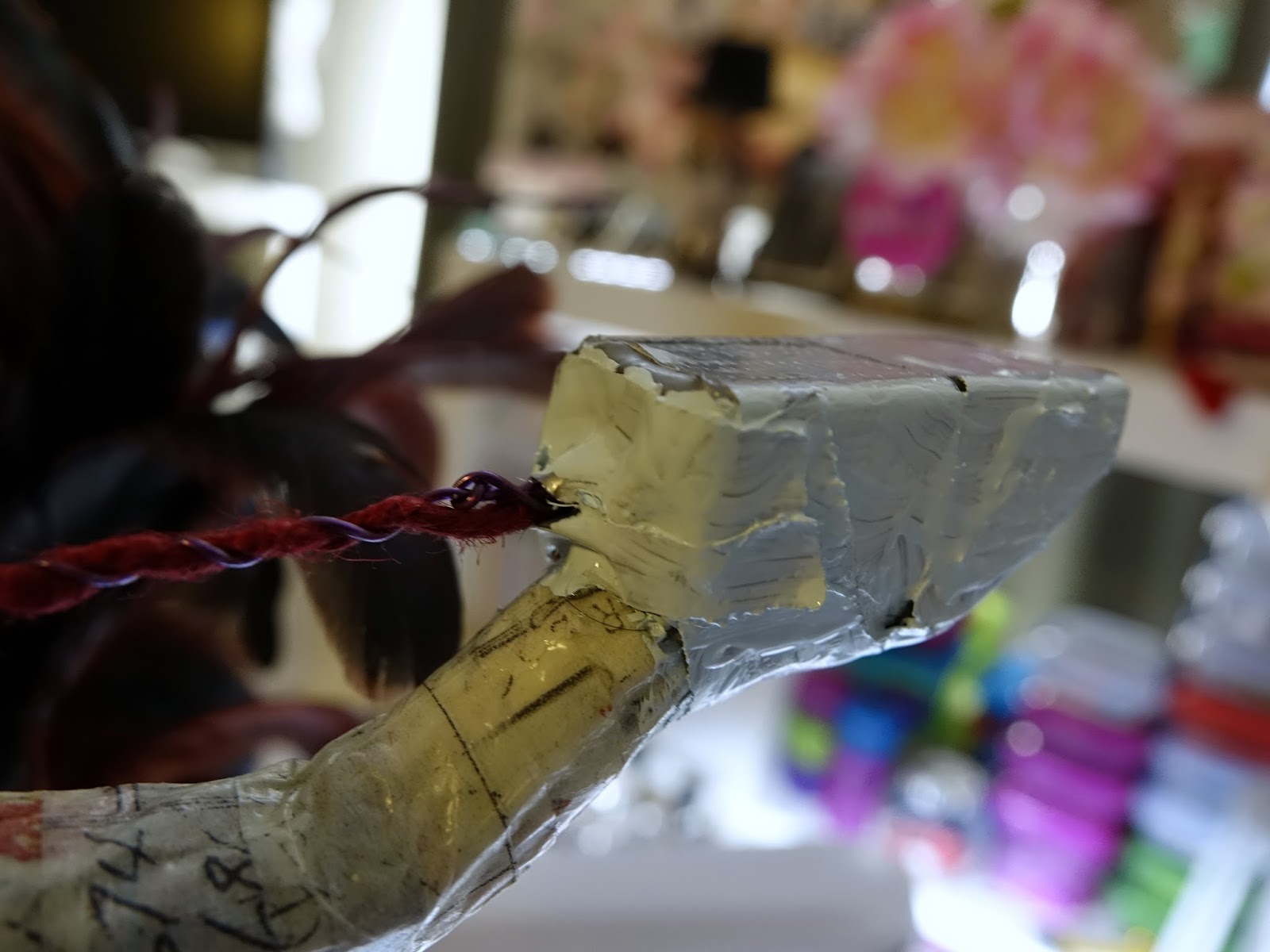 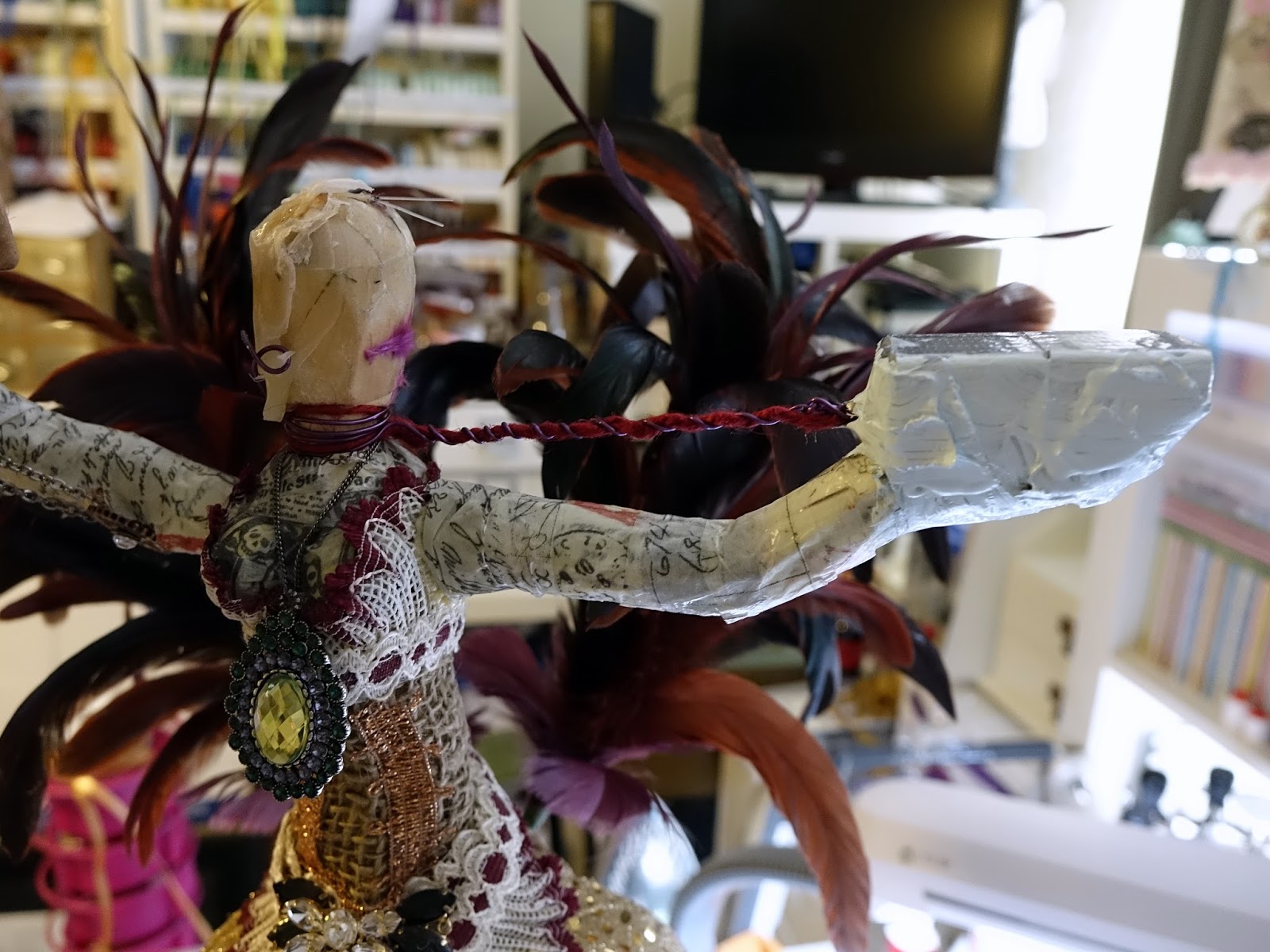 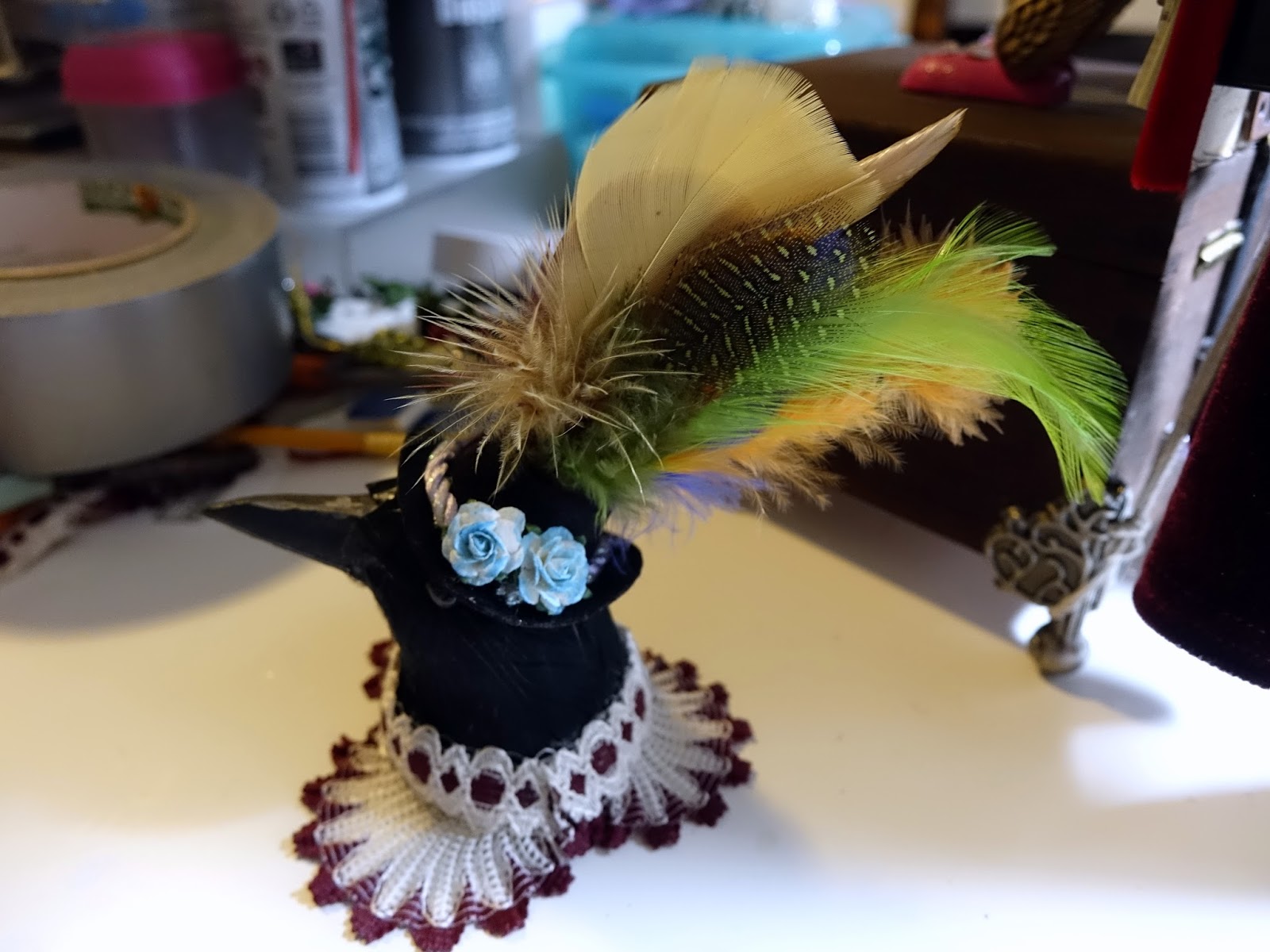 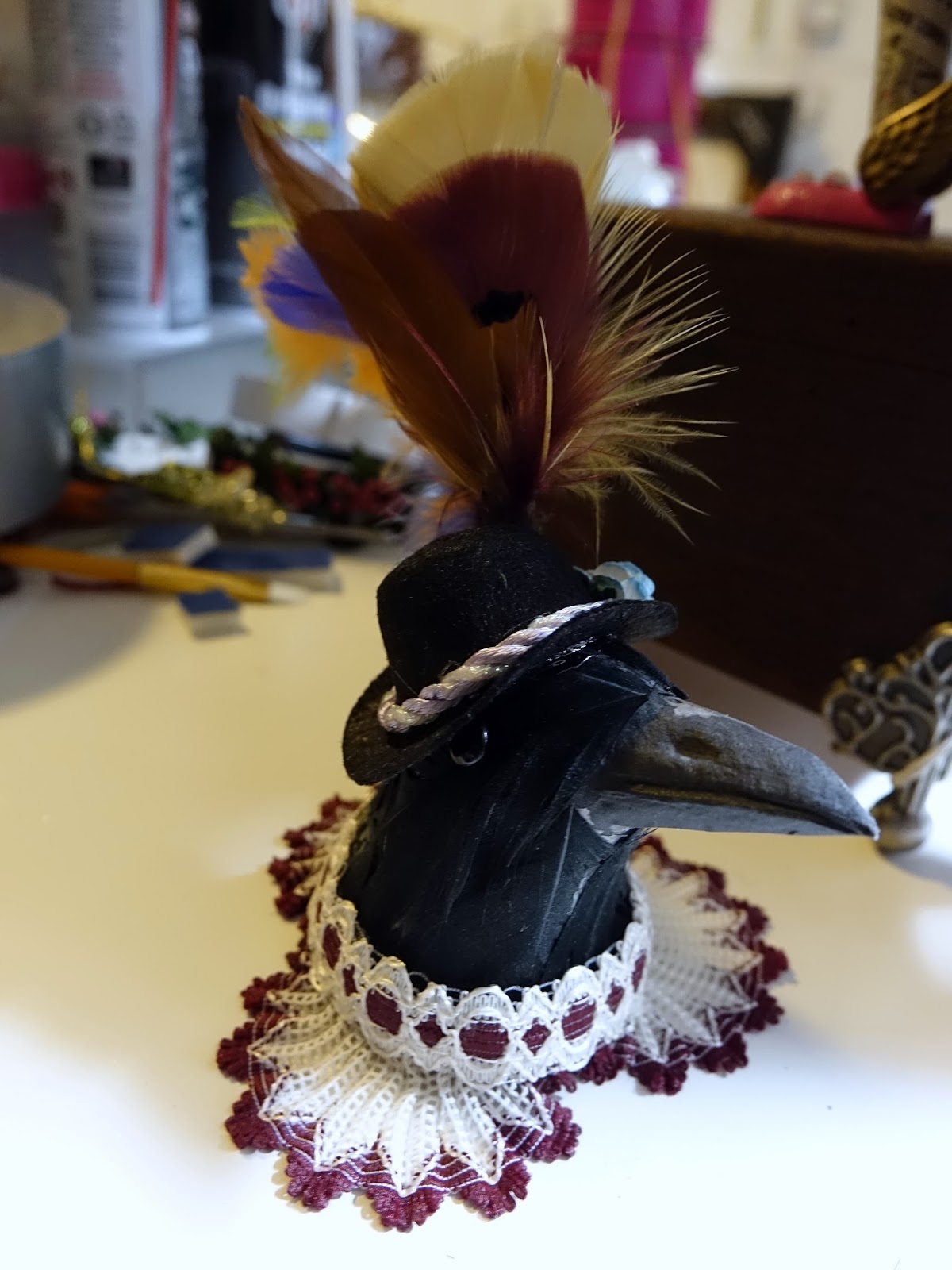 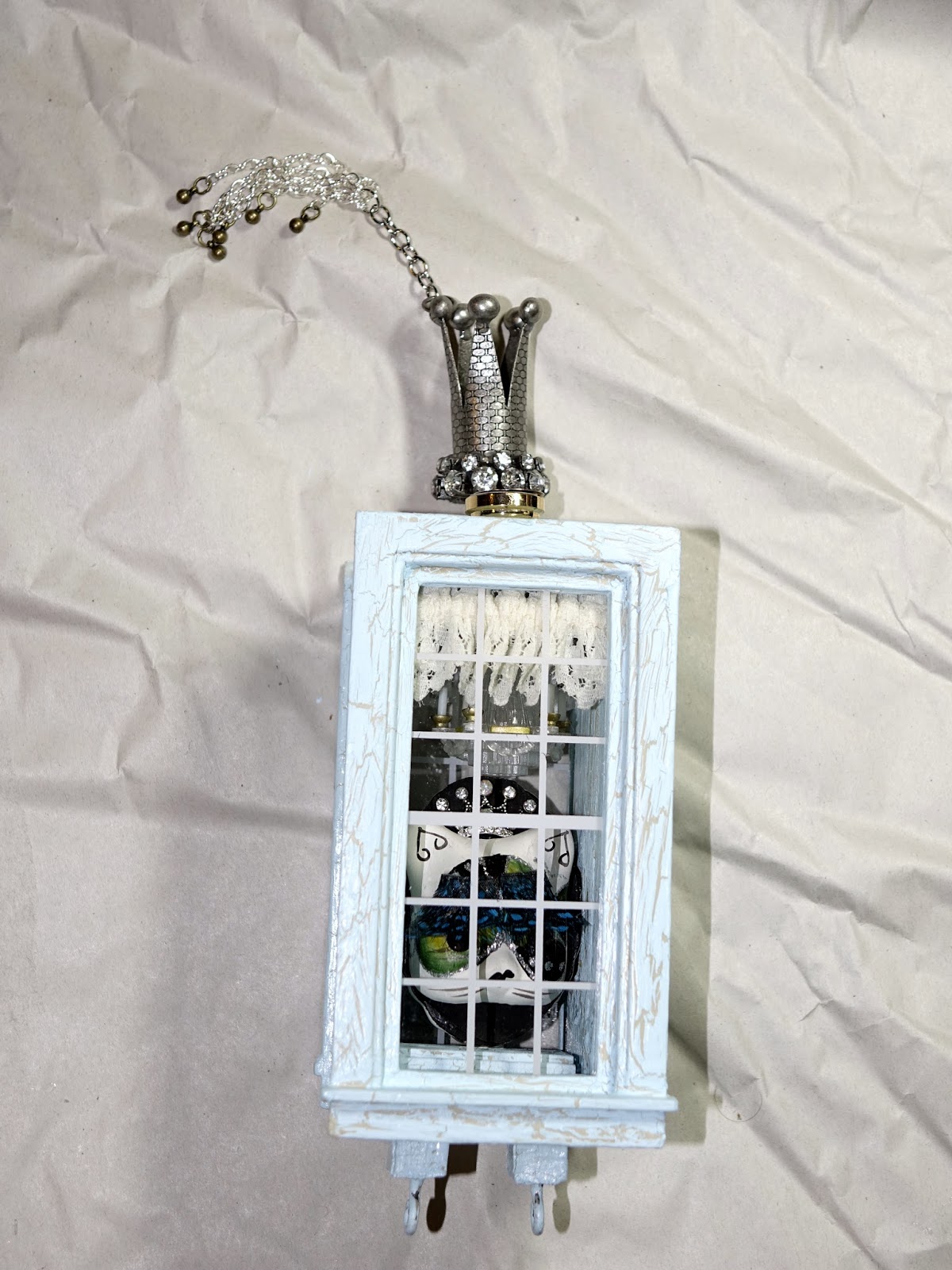 Now you get a good look at the hooks that the articulated body will hang from. 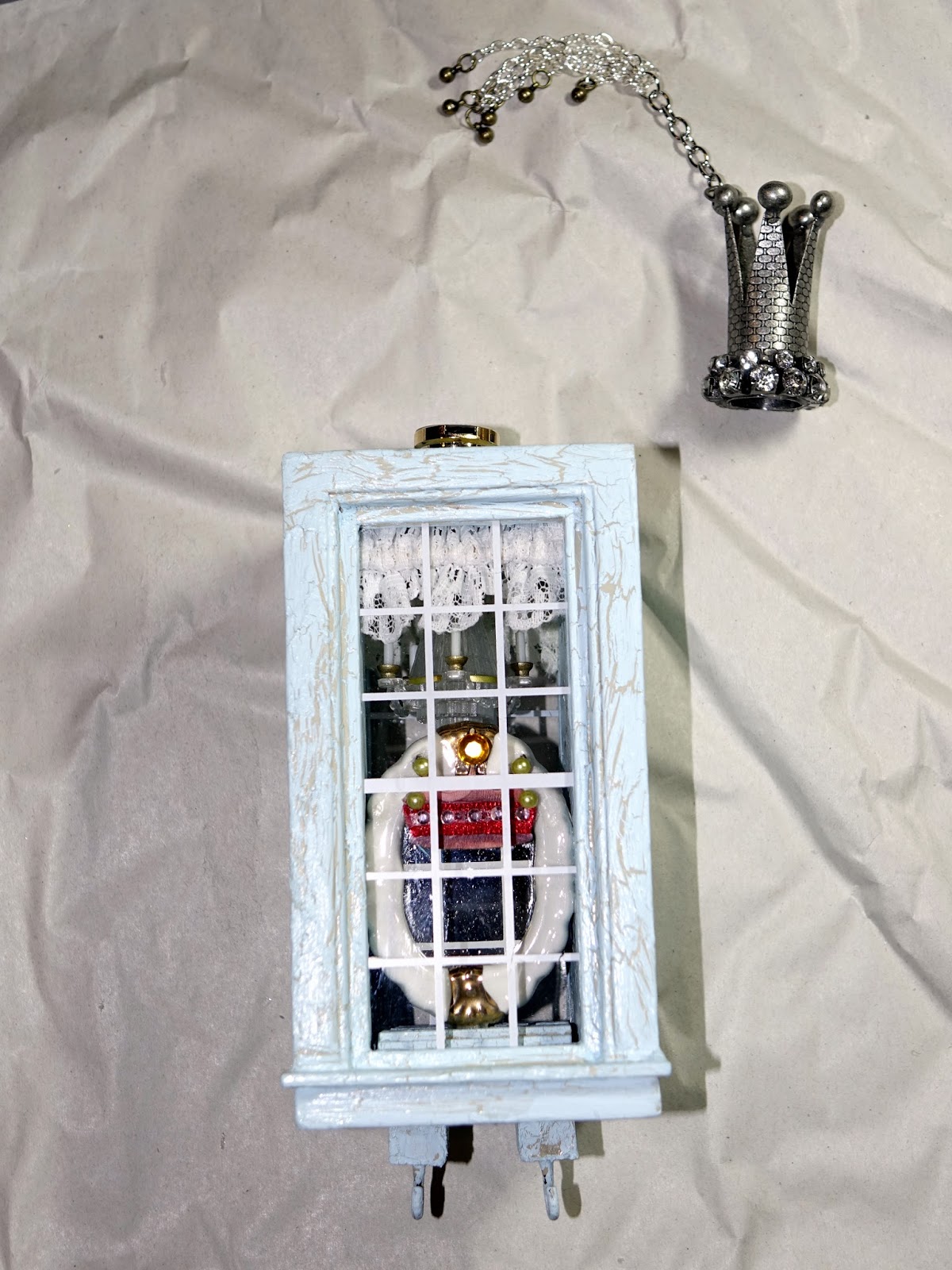 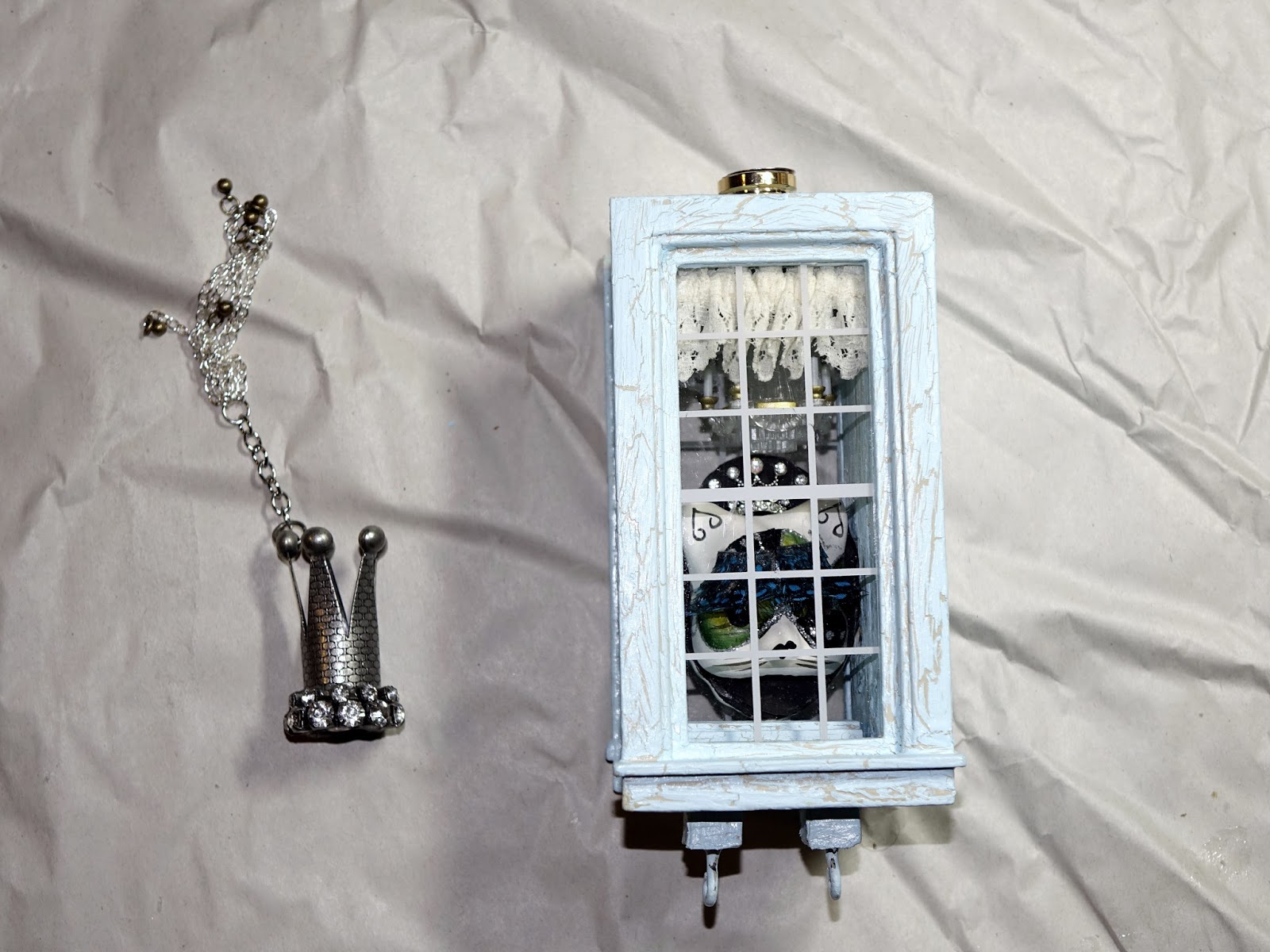 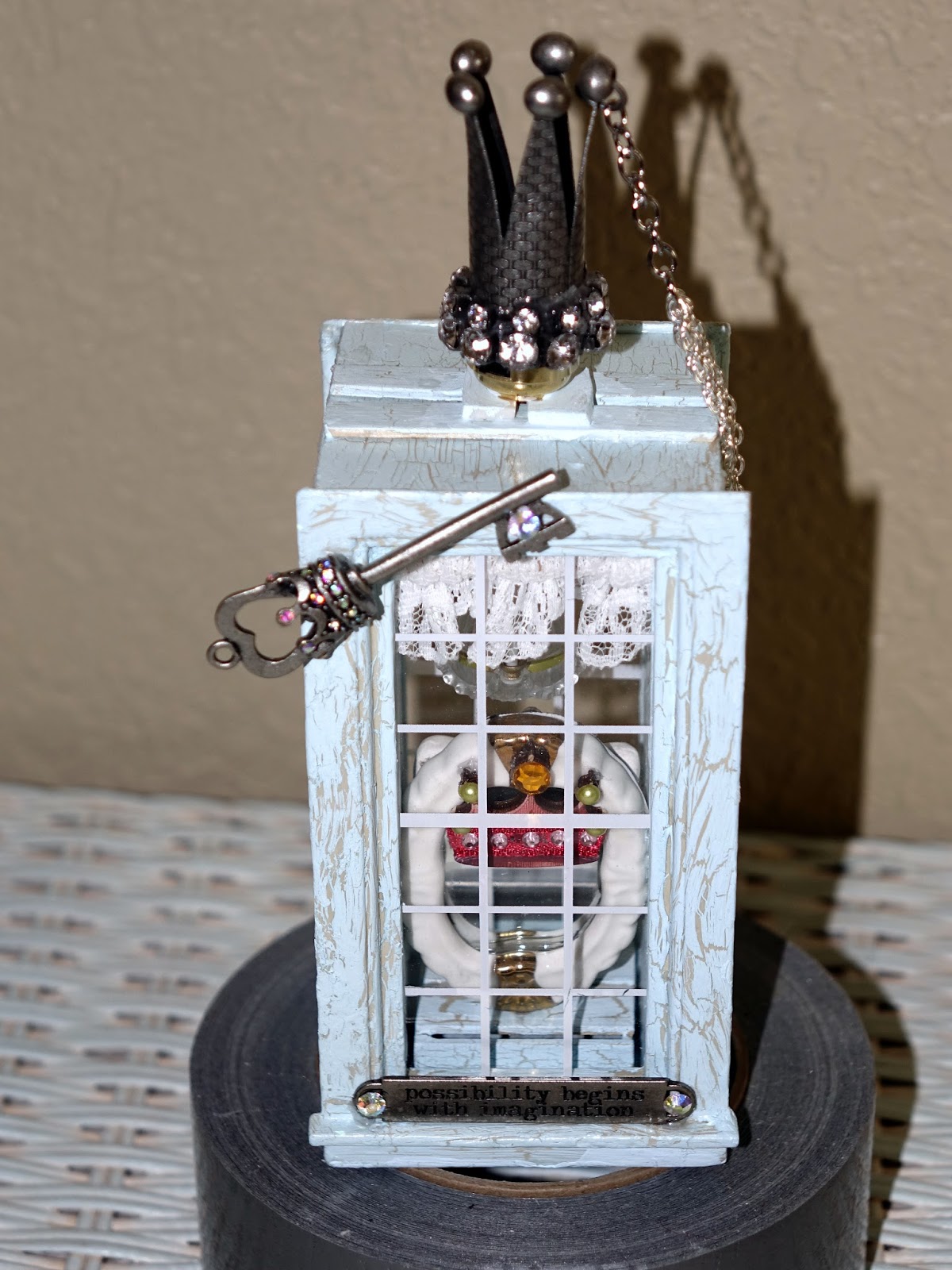 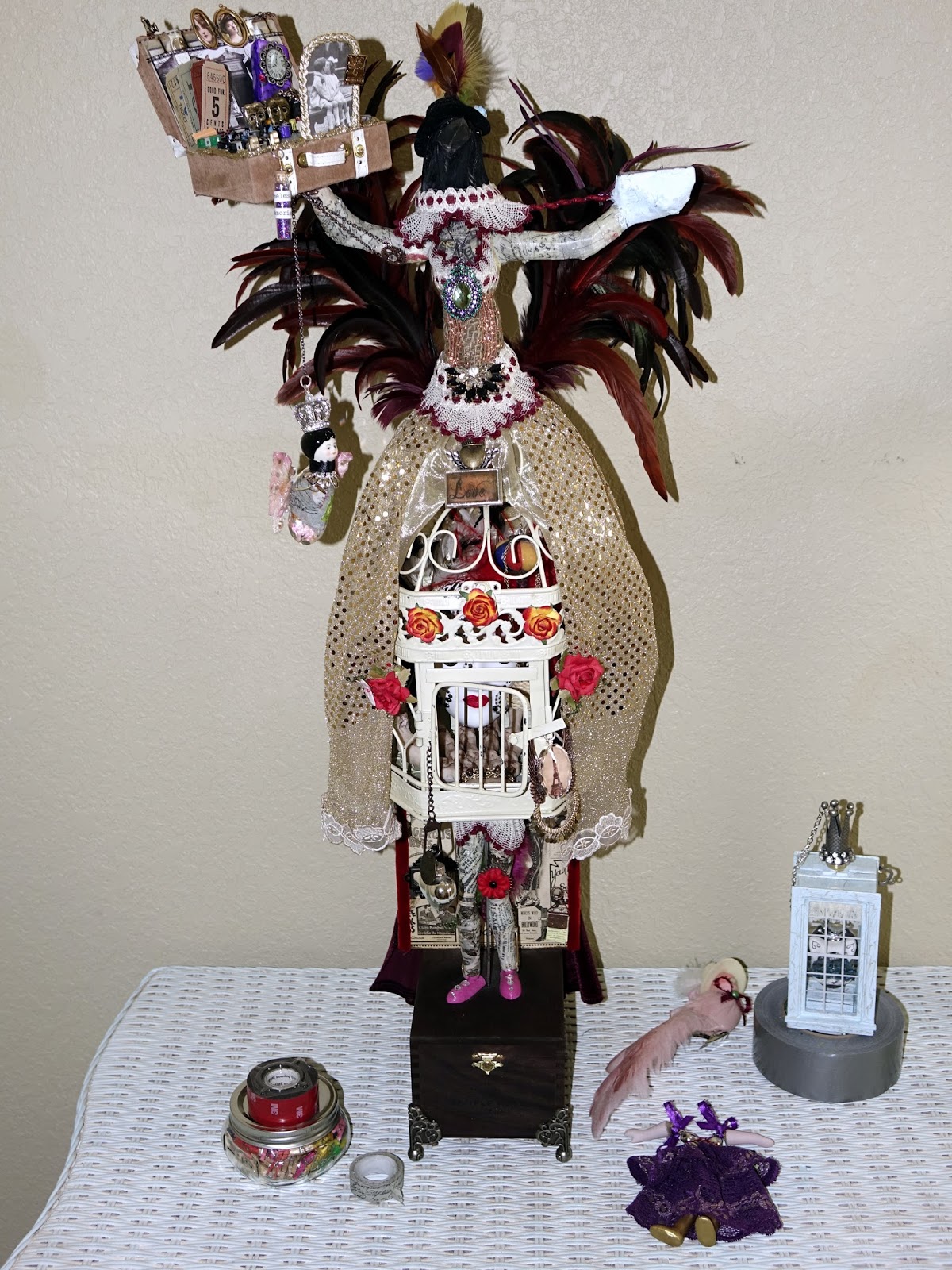 I also made a scepter that hook on the cage and was glued to the side of the box. The dolls hand was positioned as to be holding the scepter. The scepter looks really cool in real life but also serves an important function of stabilizing the wooden box so that it stays upright and so it does not tilt forwards or backwards. 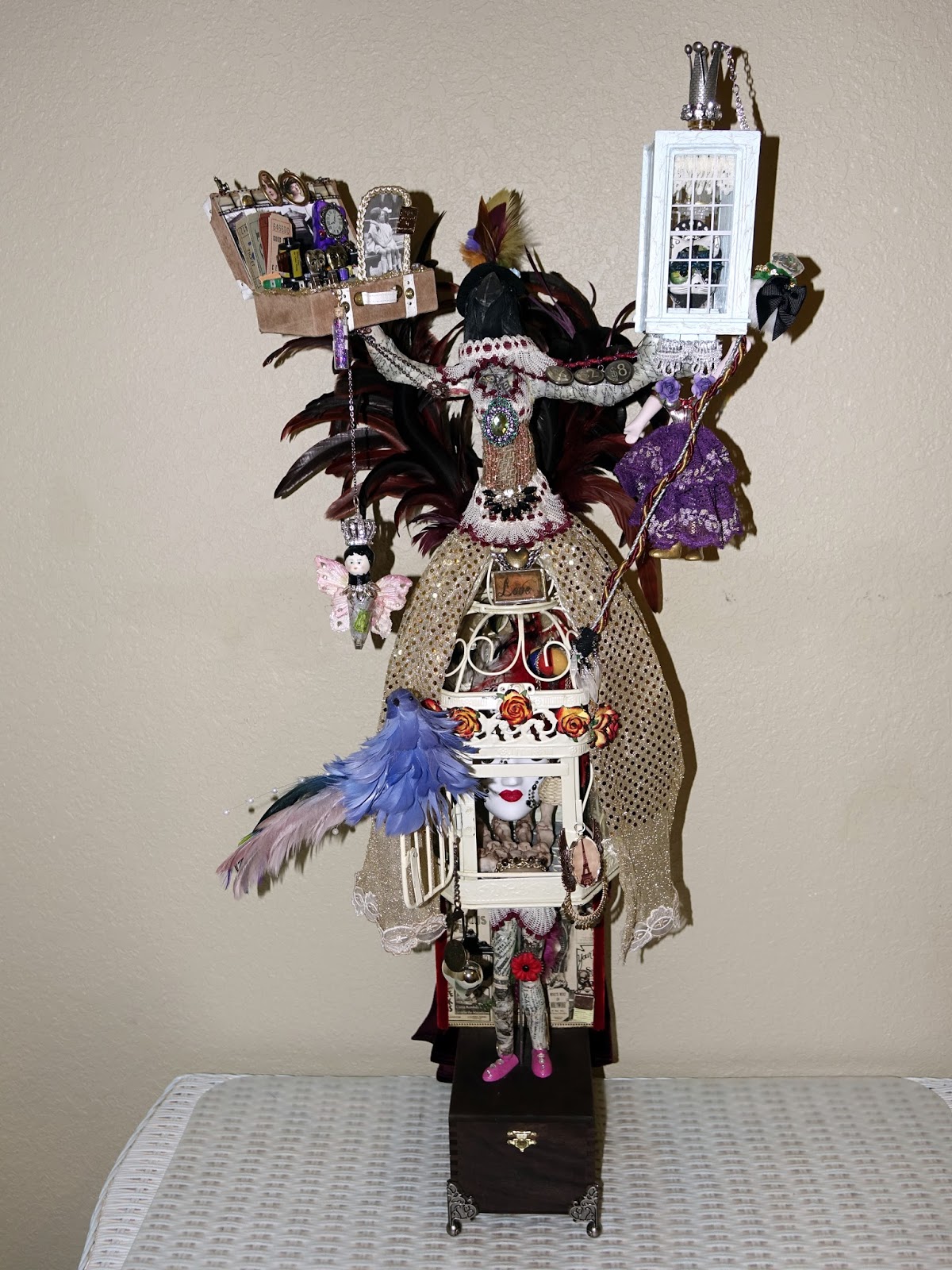 Added new funky bird to the front of the cage 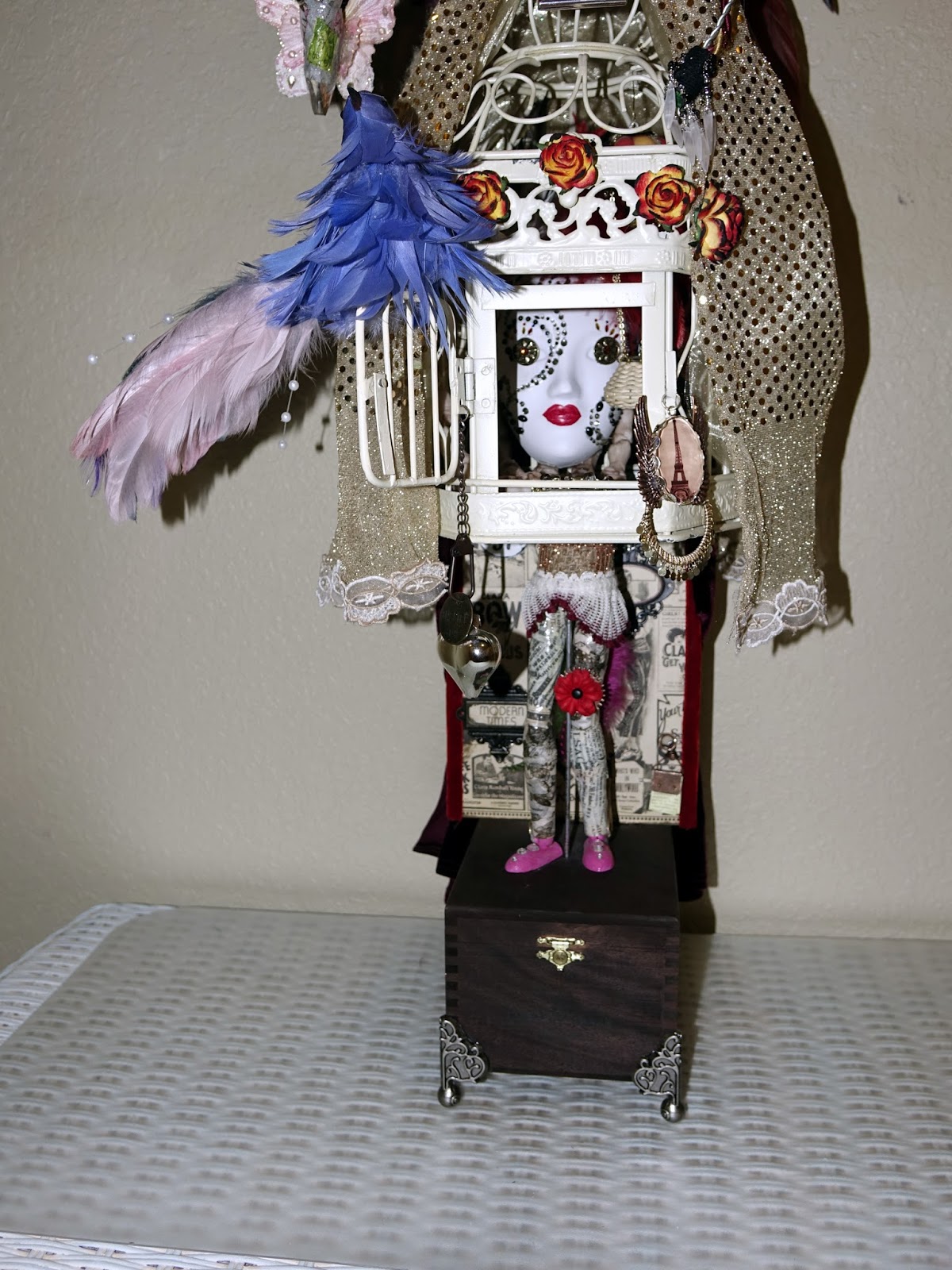 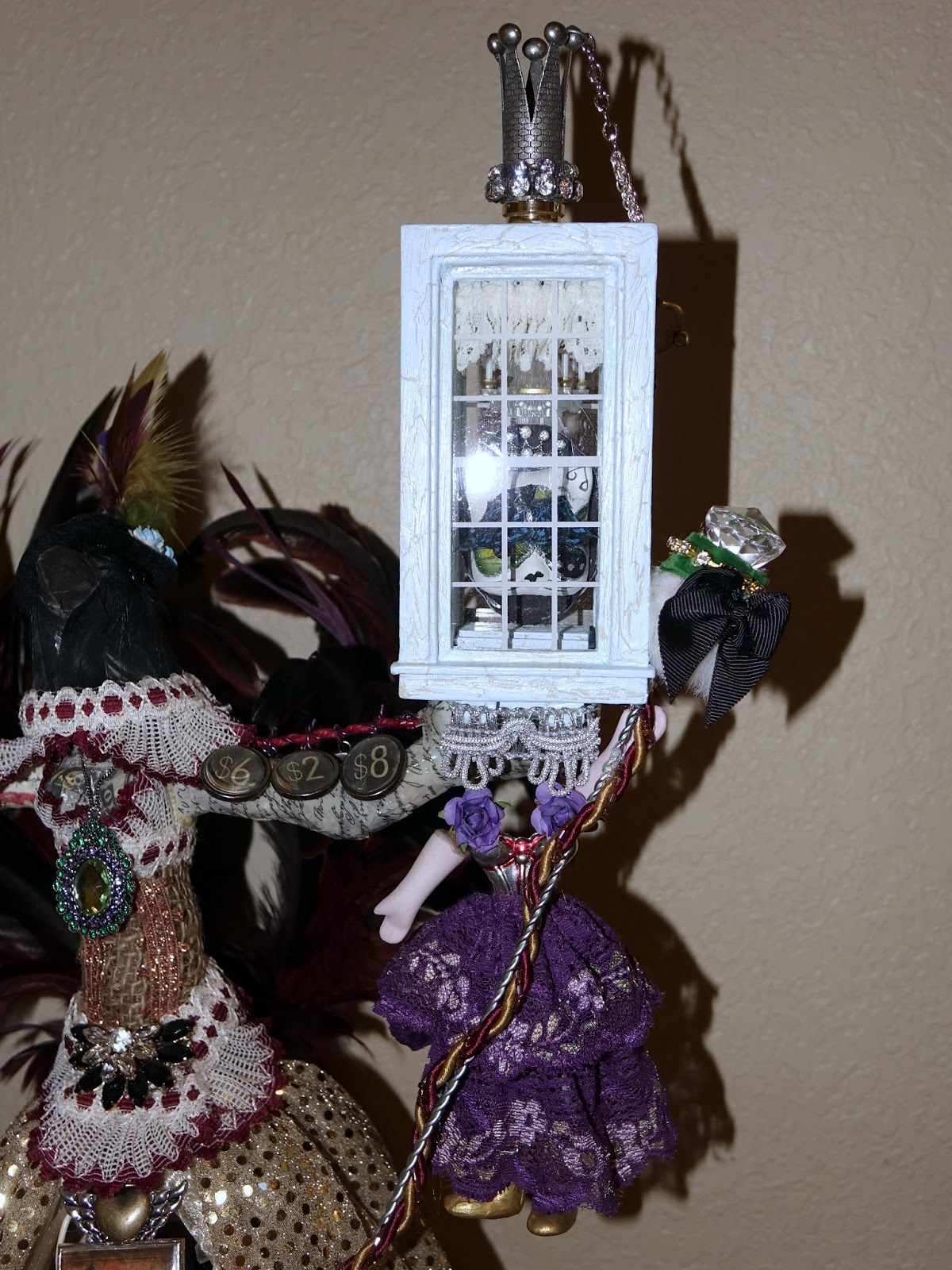 That about wraps it up. Veronique 2 is now completed.
Posted by Rick Rosenshein at 7:29 PM 0 comments Links to this post