Harvesting The Gardens And Other Odd Jobs

Well the 2019 sweet pepper harvest has come and gone. This year I had the healhiest plants that I have ever had and they were all grown from seeds.
I grew some sweat hot peppers that were supposed to be mild as far as their heat. Unfortunately they turned out to be a little hotter than what I am comfortable with so I gave my neighbor approximately 10-15 pounds of sweat hot peppers.
That still left us with plenty of regular green peppers, sweet red peppers and sweat yellow Italian peppers.
We ended up with about 31 vacuumed sealed "save a meal" bags of assorted peppers in our freezer along with giving away numerous pounds of assorted peppers to our neighbors. All in all it was a great pepper season.
Yesterday I picked the last of the peppers and cleaned out and stored the large planter pots for next year.
I have been trying to stay ahead of my list of things that need to be done and so far I am ahead of schedule.
I "pressure" washed the siding of the house. I use a soft pressure wash technique after spraying the siding down with a store bought product. I spray it on, leave it set for at least 10 minutes and then soft wash it off. The product kills and removes stains and mold. So that job is off my list. I have been busy doing some planting and landscaping around the house.
I have prepared the back deck to be completely removed and replaced with a TREX composite deck. We are extending our deck outwards by 1 foot all of the way around. That project will be starting at the end of October.
The last big job I have on my list this year is re-fill the cracks in the driveway. I already did it once, which was a big job because the cracks had not be filled for years and had got big in some locations. I was able to fill the cracks up but with the heat and normal wear and tear some hairline cracks developed where I had filled the big cracks in originally. I will wait for a day when it is a little cooler and fill those hairline cracks in. That should last me until next year when I will probably have to do it all over again.
I would rather do it that way than have a concrete company come in and tear out the driveway and pour a new one in. I just don't want to spend the money on that job nor have the yard messed up along with possible issues with the irrigation system. I can live with the brighter colored concrete crack filler and having to do the job every year.
Here are a couple of photos of just a few of the sweat peppers harvested this year:

The smaller peppers on the left are the so called sweet mild peppers. They are supposed to be sweet when they turn red and not as hot compared to picking them and using them when they are green. I tried a red one and yes it was a little sweet but did not take long for the real heat to kick in. 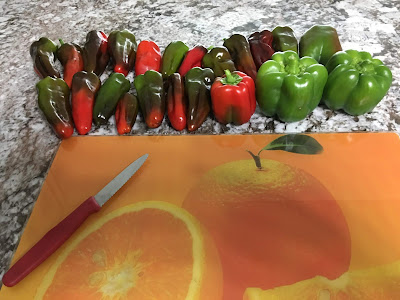 Below are the last of the peppers that were harvested yesterday. These were given away to the neighbors except for a couple of the red ones which I will use on my pizza in the next day or two. 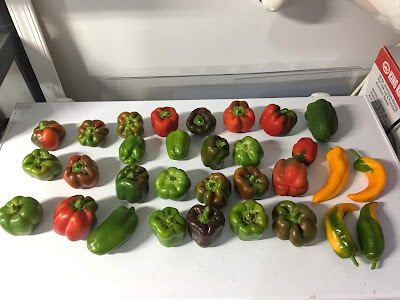 Posted by Rick Rosenshein at 6:17 PM 0 comments Links to this post