I went to pick up Veronica from work. I arrived to find these workers busy boarding up the front of the T J Maxx building in anticipation of the arrival of Hurricane Earl.
They are talking about the hurricane arriving here tomorrow night although we will get bands of rain and wind before then. 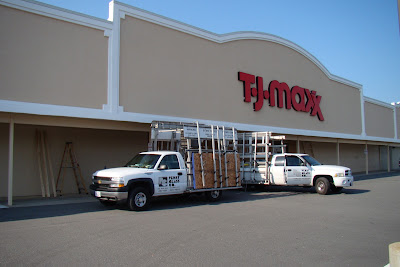 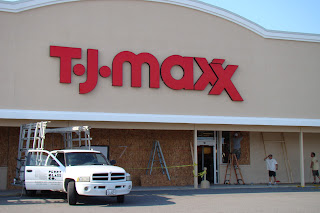 The store will be open tomorrow. The time that it will close will depend on when  storm arrives here. Veronica and I will be there when the store closes. I will be helping them put up a frame where the only  unboarded open door is. Once we get the door frame screwed in we will then put up the plywood pieces...kind like putting a puzzle together. The plywood sections will then be screwed to the frame. Hopefully it won't take too long to do this task because I am sure it will be raining and the wind will have picked up some by that time. 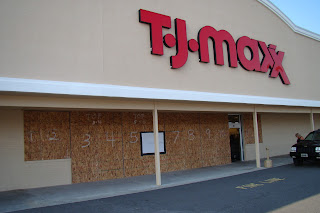 Posted by Rick Rosenshein at 7:09 PM 0 comments Links to this post

All hurricane watches for the OBX and North Carolina coastal borders have now been changed over to hurricane warnings.
Veronica just called me from her work and told me that all of the local emergency vehicles are now hitting the gas stations and getting filled up.
It appears that some of the local gas stations have already started to raise their prices higher than what they were set at this morning, when I took Veronica to work.
I find that behavior to be totally outrageous...they should be flogged in the public square.
Posted by Rick Rosenshein at 11:08 AM 1 comments Links to this post

Update And A Few Changes

Unfortunately Veronica and I received information that was not the most accurate.
There is not a mandatory evacuation for our immediate area yet.
What they seem to be doing is a systematic evacuation.
Residence of Ocracoke Island were told to evacuate earlier. You can only get on and off the island by ferry.
Just heard that visitors on Hatteras must evacuate.
They are still waiting to see how this hurricane will track.
Eventually they will probably have all visitors leave the area and sometime after that, locals will be told to leave.
Of course if you want to leave earlier you can.
I called the Hampton Inn, in Williamston, NC and cancelled our room for tonight only. We will probably stay here for tonight and then go elsewhere tomorrow.
Depends on the evacuation process and the storms progress and track.
Veronica is at work.
They are supposed to be boarding up the stores windows this afternoon.
I spent the morning so far dragging down bags and items to go in the car with us, should we be told to evacuate.
I also put shipping tape on the windows.
I mainly taped up the big sliding glass door set that we have on both the 2nd and 3rd floor.
I also taped up the ground floor windows.
You would never know that a storm is coming. The sun is shining and there are no clouds in the sky. Just a clear nice day here on the Outer Banks.
Give it 24-36 hours and we will see what it looks like at that time.
So now it is time to just sit around and wait.
Update to my update.
Just saw the Mayor of Kill Devil Hills on the Weather Channel being interviewed.
He just announced that there is now a mandatory evacuation of all tourist in the immediate area.
The Emergency Management people will be monitoring the hurricane system and make determinations of any further evacuations as time goes by.
Posted by Rick Rosenshein at 8:46 AM 0 comments Links to this post