Well today is the last day of our cruise. We left Ketchikan yesterday afternoon at 1:30. We will arrive in Victoria at 6PM. Because of the late port of call, Veronica and I slept in a little later. We got up around 8AM, had breakfast and then came back to the room to pack up our luggage. They have something called the Bags Program. You pay $19.95 a person, leave your suitcases in the hallway by 2AM the following morning. They then take your luggage to the airport and proper airlines. Your luggage meets you at your final destination. Because our flight wasn't until 10:15PM tomorrow night, we were going to walk around Seattle and we could not do that dragging all of our luggage around. It was the first real rainy day that we had on the whole cruise. Just a very dreary day...kind of like letting you know that your cruise was almost over with and it was back to reality time. After packing our luggage up, we decided to hit the casino one last time. I had one of those coupons like Veronica had, where you use your coupon as a first card ace when playing blackjack. Well I used the first card ace coupon and my second card was a 3. Things weren't looking that great for me. I had only bet $20 on the hand. I then got another 3 and stood pat with my hand of 17. As it turned out, the dealer busted and I won...doubled my money. I then hit my favorite slot machine. the one that was good for me on an earlier casino visit. This particular slot machine was once again hot for me. I kept hitting bonuses, additional spins and of course additional winnings. By the time everything was said and done, Between Blackjack and our slot playing, we won $365. We then grabbed something quick to eat and headed back to our cabin for a nap. At 2:45PM we headed for the Stardust Theater for a Crew Talent Show. The show was ok but the final performance was funnier than heck and starred Simon, the ships cruise director. Everyone loves Simon and he is very well know in the NCL cruising world. Her is from "down Under" and is a laugh riot....I can still hear him saying, in his "down Under" accent "and have a smaaaashing day". The video of this particular performance is down below. Veronica and I went to a Japanese Teppanyaki( restaurant. The food and preparation was really good. We enjoyed it a lot and was some of the best food we had on the ship. We arrived in Victoria at the scheduled time. I first thought that the Victoria BC port of call was kind of like a waste...like they threw in an extra port just to fill up the cruising week. I felt that way because we were only in Victoria from 6PM until midnight and because it was a nigh time stop, that there wouldn't be much open during those hours. Boy was I wrong. Victoria is a beautiful city and the nightlife is something else. The city was buzzing with activity...plenty of street performers everywhere. Veronica and I walked all over the place. It was a really nice end to a great cruise. Because we were pooped out...you know how us old folks can get, we ended up taking a cab back to the ship. There were 2 other ships making Victoria their port of call...the Holland America Westerdam and the Princess Star. We had seen both ships in some of the other ports of call that we had so their itineraries were almost the same as ours was. We ended up going to bed around 11PM but found that we were so used to listening to the ships wake, that the silence of not having the ship moving and being docked in port, was actually a loud silence. Without the white noise, it took me longer to fall asleep. Maybe it was because it was our last night on the ship. Tomorrow we head home...crap...reality awaits. I don't want to leave. They will have to drag me kicking and screaming off of this ship. I am not leaving without a fight. Did someone say stowaway..I am so there. I almost forgot to mention...on our cruise we seemed to have a problem with assorted emergency alarms in our cabin. There was an emergency switch on both sides of our headboard plus a main emergency switch near the cabin door. The position of the emergency switch on Veronica's side of the bed was in a poor place. Veronica moved her pillow against the switch 3 or 4 times throughout the course of the cruise and we had people calling our room to make sure that we were ok. A couple of times they called and the switch had not been pushed at all. Must have been a faulty switch or something. Then one time I was in the shower and the next thing I know, a knock on the door and I could hear someone talking to Veronica. Veronica comes into the bathroom and tells me that because the bathroom door was ajar just a little bit, the steam from the shower set off the fire alarm. I am sure that they were happy when we got off the ship...no more false alarms to worry about and deal with. 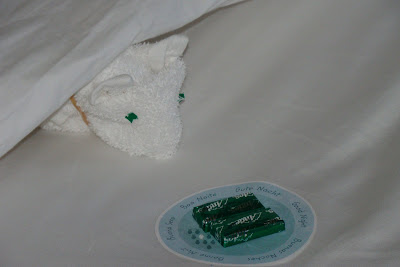 Some of the really nice homes in Victoria. There were nice older homes and then some modern architecture. Almost all of the homes had really beautiful gardens. You could really tell that the homeowners to a lot of pride in their residences. 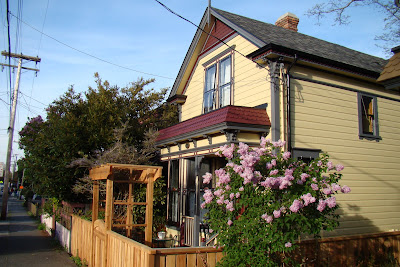 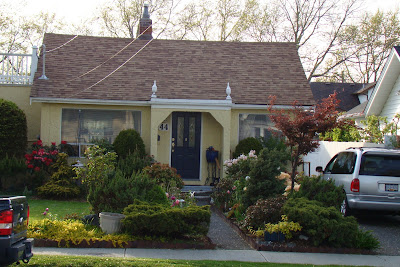 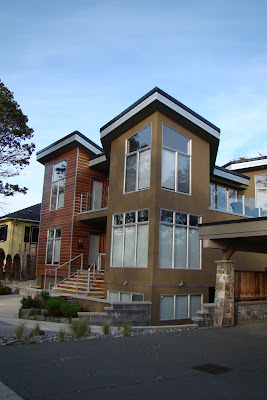 A duck family laying in the grass 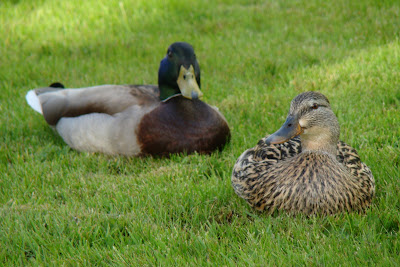 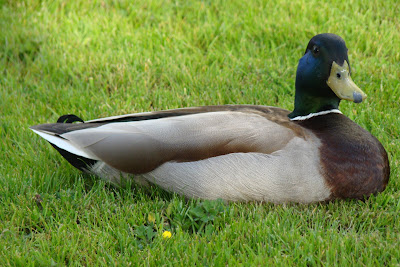 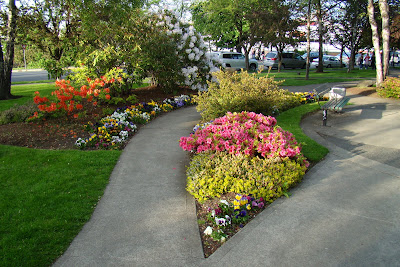 This is a parliamentary building in Victoria. Some of the architecture throughout the city was really interesting 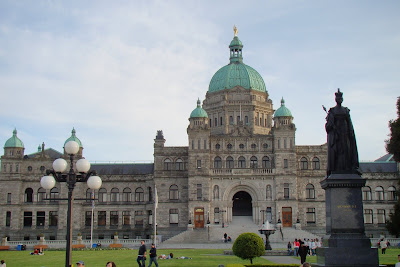 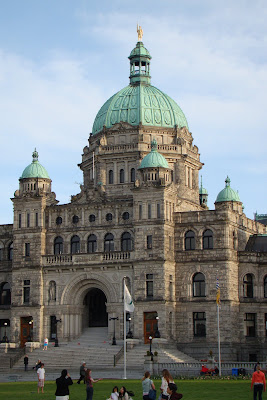 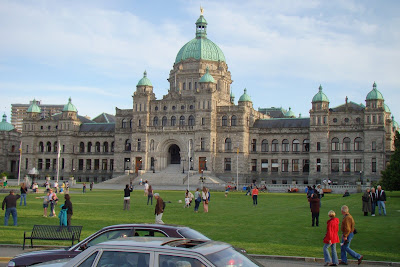 Here is part of Victoria Harbor 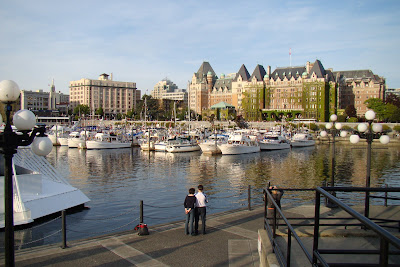 A water taxi in the harbor This is the Empress Hotel. The oldest hotel in Victoria. The hotel had moss all over it 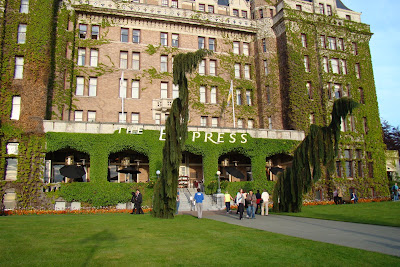 These 2 trees were in front of the Empress Hotel. The kind of reminded me of dinosaurs...maybe protecting the entrance...what an imagination huh? 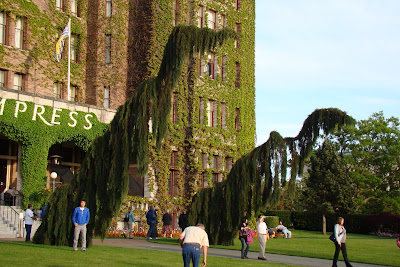 Oh, I almost forgot to mention..I opened a restaurant in Victoria while we were there 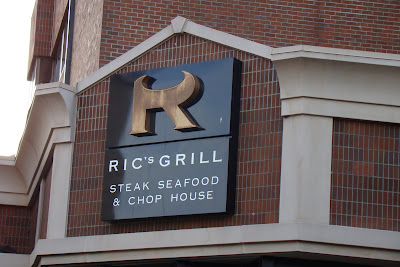 Here is the Princess Star dock in Victoria 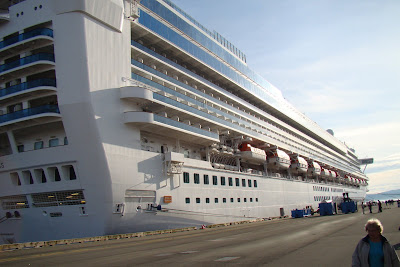 Here is the Holland America Westerdam 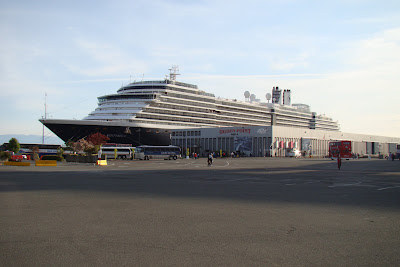 Special2.wmv'>Crews Talent Show With Simon Part#2
Posted by Rick Rosenshein at 8:01 AM 1 comments Links to this post