Did you hear about the ShamWow guy getting into a fight with his allegedly hired prostitute? Sounds like the ShamWow spokesman, Vince Shlomi, was looking for a little lovin' away from his usual jobs of selling absorbent towels and food choppers. Shlomi who is 44 years old, was arrested last month on a felony battery charge following a violent confrontation with an alleged prostitute in his South Beach $750 a night hotel room. Those ShamWow towel infomercials must really pay well. I think I am in the wrong line of work....towels for sale...towels for sale!!!! I need some lovin...towels for sale!!!! According to an arrest affidavit, Shlomi met Sasha Harris, 26, at a Miami Beach nightclub on February 7 and ended up paying her $1,000 for straight sex....please do not confuse this with crooked sex or obtuse triangular sex.....which usually runs a person just a few more bucks. Not that I have any direct knowledge or participation in such things. It appears that when Shlomi decided that he wanted to slip Harris a little tongue action during a kiss, she must has mistaken his tongue for a piece of sushi. Harris allegedly put a death grip on Shlomi's tongue and the fight was on. In order to get Harris' to release her grip on his bloodied tongue, he decided to tenderize Harris with several punches to the face and head. After getting his tongue back from Harris' grip, Shlomi ran down to the hotels lobby, where security called the police. Harris sustained facial fractures and lacerations all over her face during this 4 AM fracus with Shlomi. While Shlomi and Harris were both arrested for felony aggravated battery, prosecutors this month declined to file formal charges against the combatants.
Is this the face of a person that you would buy your absorbant towels and slap choppers from? Hmmmm....me thinks not! 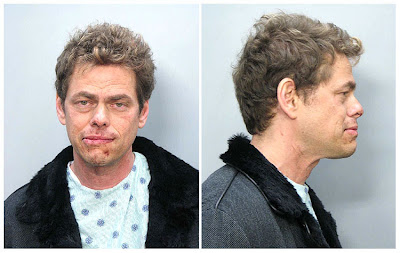 For more information about this incident, please click on the following link:

Posted by Rick Rosenshein at 6:01 PM 5 comments Links to this post