I got a telephone call this morning from Veronica who was at work.
She wanted to know if I had heard anything about a tornado warning in the Nags Head area.
Veronica told me that a couple of her Associates had a weather app on their cell phones and that their phones were sounding off a weather warning alert.
As it turns out, there was at least one waterspout that touched down in the water.
Here is a link to Wavy.com that reported the bad weather and the waterspout that was in the area.......
Wavy.com news reporting the waterspout in the OBX
Here is a photo of the waterspout taken by Daryl Law, a local photographer. 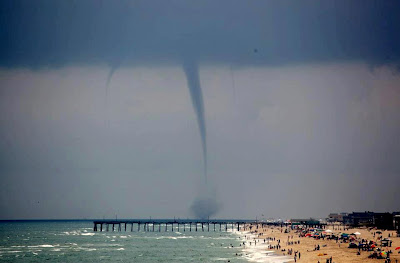 Posted by Rick Rosenshein at 8:28 PM 0 comments Links to this post