A Change In New Adventure Plans

Veronica and I have decided to change our cruise plans. Originally we had made plans to take a 12 day Grand Mediterranean Cruise, on the NCL Spirit in September of 2012.
That cruise departed from Barcelona and ended in Venice. In between those two points the ship would have ports of call in a couple of places in Greece, Italy and Turkey. Some of those ports of call weren't ones that really interested us. Plus there was the fact that it was going to be more expensive flying into one location and out of a different location, rather that going each way through the same location.
Veronica really wanted to see Venice Italy, and the Greek Islands had been mentioned  as a place that she also wanted to see.
So after looking over many cruise itineraries, we decided on doing a 7 day Eastern Mediterranean With Greek Islands cruise. This cruise departs and returns in Venice. Since we really would not be having much time to actually see Venice at the beginning or end of the actual cruise, we decided that we would fly to Venice several days before the cruise began. Because the cruise date is so far out, we can't make any hotel or airline reservations yet but we plan on spending 4 nights in a Venetian hotel that is right in the heart of historic Venice.
We will purchase transfer services from Norwegian Cruise Line so that we can easily get from the airport to our hotel in Venice and then from the hotel to the cruise ship. Transfers will also include going from the ship to the airport when our cruise is over.
We will actually have approximately 3 1/2 - 4 days to explore Venice and maybe take in a couple of islands such as Murano and Burano.
One of the hotels that NCL is showing on their web site is right in the heart of the historic district of Venice and it is also right on one of Venices many canals.
There is so much to see and do in Venice, that we could spend months there but unfortunately that isn't possible. But we will sure try to put a dent in all that there is to see and do in Venice.
During the cruise, we will have ports of call in Corfu, Santorini, Mykonos and Katakolon. There will be a couple of sea days in there also, which will allow us to relax just a bit.
This cruise is on the NCL Jade, which is the sister ship of the NCL Pearl. We have been on the Pearl a couple of times and really enjoyed being on that ship.
In order to make this all happen, we decided to go with an Inside Cabin, which are usually the least expensive category of cabins on a cruise ship. Our cabin will have the usual amenities that are in cabins along with two beds that form a queen sized bed.
Our cabin will be much smaller than the balcony and mini suite that we have previously had on past cruises but we don't plan on being in the cabin that much. Our cabijn is on the 10th deck.
There are plenty of things to do on this ship during our sea days plus they have a great observation area where you can kick back in a comfy chair and watch the beautiful coast drift by or get lost in a book.
Actually Veronica will most likely get lost in her new Kindle.
Below is the itinerary for our cruise: 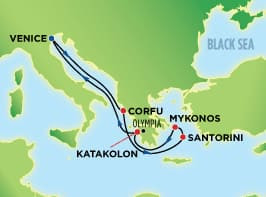 ﻿
Here is a link for additional information about the NCL Jade
Future trips and locations that we are interested in seeing are Paris, Scotland, London, Ireland, Iceland, Norway and a bunch of other more inland locations that we will have   possibly see doing either an escorted tour and maybe one of those river cruises. Plus we also are going to be doing a "mulligan" on the Baltic Capitals Cruise that we previously enjoyed so much.﻿

Posted by Rick Rosenshein at 5:00 PM 1 comments Links to this post