The Garden Has Been All But Wiped Out

It has been a very tough gardening year. The peppers came down with a severe case of black spot and it has really taken its toll on all of the pepper plants. I have treated them all repeatedly with fungicide and it has had minimal results. I have harvested some peppers off of the plants but I don't think any new peppers will be showing up. The leaves from the pepper plants have been falling off right and left to the point that on some plants all that is left is mostly a stem. They are some sad looking plants. They are a few that still have some buds on them but I am not sure what they will produce. The tomatoes on the deck have been having a tough time too. All in all it has been a real battle this season with all of the crops that I have planted.
Of the peppers that I have harvested I ended up pickling most of them and with the large tomatoes I ended up making and freezing sauce for the Winter months.
I re-planted some corn after my first crop turned out so poorly...my fault for being over ambitious and planting the corn to close together in order to get more rows in. All I got was under developed corn and stressed out stalks. After re-planting the corn was coming up nicely until some kind of bugs/insect/worm starting eating away at the stalks and even after treating the crop, whatever was eating it ate enough of the small interior stalk portion that it just toppled over. I ended up having to pull them all up. I pulled the plastic weed guard and and long metal staples up too.
I had been told that I should not plant any tomatoes or peppers in the planter containers using the same soil for 3 years do to the black spot so I dug up the soil in the corn garden and swapped out the soil from the pepper plant containers with the corn soil so each crop will get fresh soil next year and hopefully that will take care of the black spot issue.
It has been one thing after another this year and so disappointing.
I am going to be trying my luck again at growing some more Yukon Gold potatoes in a couple of weeks. I had pretty good luck earlier in the year with a mixed bag a fingerling potatoes and Yukon golds so this time it will be all Yukon golds.
Here is a photo of my pepper of the year..it is an Italian Heirloom grilling pepper: 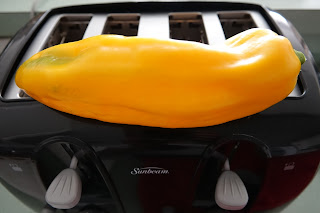 You can see why it won pepper of the year

Posted by Rick Rosenshein at 12:59 PM 0 comments Links to this post