This Really Has Become Old

I sure could use a breath of fresh air.
Everyday has become a repeat of the day before.
There is no escaping it.
It even sneaks into the house through whatever small cracks, crevices and gaps that it can find.
No it isn't one of those creepy monsters that you find in some scary movie that invades your residence and drags your screaming body out into the night..
It is that darn smoky air that gets blown our direction every time we have a breeze coming from the South. That darn Pains Bay fire yet again.
This is what the Weather Channel keeps giving us on the computer. Day after day after day after day....

Issued by The National Weather Service

... AIR QUALITY ALERT IN EFFECT UNTIL 3 PM EDT SUNDAY...
THE NORTH CAROLINA DEPARTMENT OF ENVIRONMENTAL AND NATURAL RESOURCES IN RALEIGH NC HAS ISSUED A CODE RED AIR QUALITY ACTION DAY FOR FINE PARTICULATES... IN EFFECT UNTIL 3 PM EDT SUNDAY.
AIR QUALITY IS EXPECTED TO REACH CODE RED... WHICH IS UNHEALTHY... AND MEANS EVERYONE SHOULD AVOID PROLONGED OR HEAVY OUTDOOR EXERTION. THOSE WITH RESPIRATORY AND/OR HEART AILMENTS MAY EXPERIENCE MORE SERIOUS HEALTH EFFECTS.
AN AIR QUALITY ACTION DAY MEANS THAT FINE PARTICULATES CONCENTRATIONS WITHIN THE REGION MAY APPROACH OR EXCEED UNHEALTHY STANDARDS.

Here are some more photos...yes I know...they look exactly like the ones I posted a couple of days ago. That's the point...they are basically the same...only the day has changed.
Now if you will excuse me. I need to take a good long hit off of that oxygen bar that I purchased the other day off of Ebay. 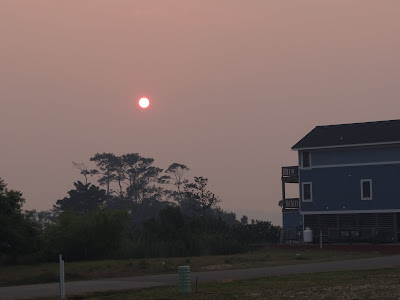 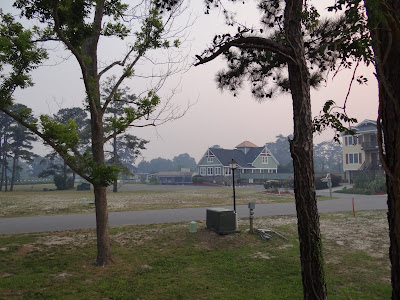 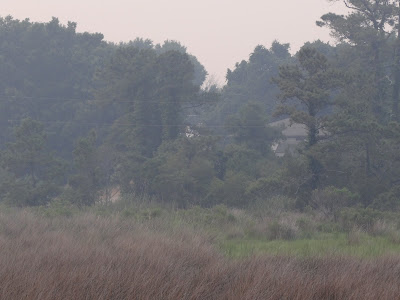 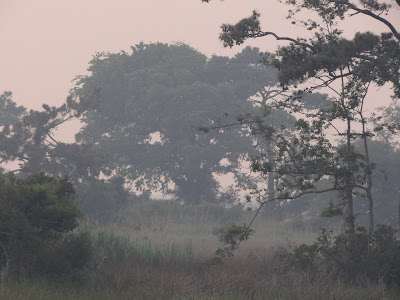 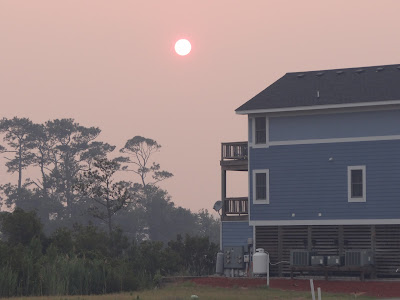 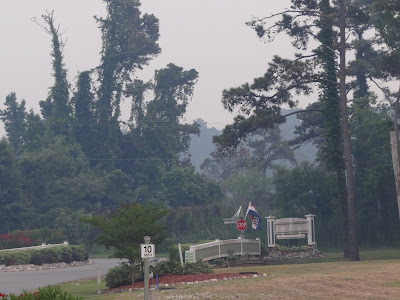 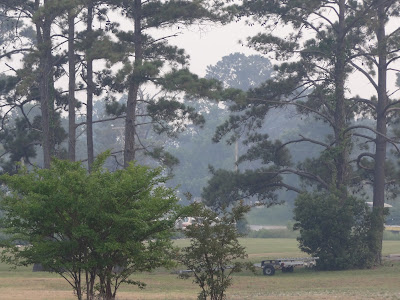 Here is a story that was reported in the OuterBanks Sentinel...the very last sentence of this story speaks volumes:
Rain needed for Pains Bay Fire suppression

BY SANDY SEMANS
SENTINEL STAFF
How much rain will it take to bring the area out of a drought?

According to David Greathouse, fire behavior analyst with the North Carolina Forest Resources, the area needs 5.72 inches of rain "to get back where we need to be."

Greathouse delivered that news to residents of Stumpy Point, who gathered at the village's community center to receive an update on the Pains Bay Fire, which has threatened the community for the past month.

The Pains Bay fire, first spotted on May 4 near Parched Corn Bay, has spread to an estimated 45,000 acres stretching north and west across Alligator River National Wildlife Refuge and the Dare Bombing Range owned by the US Department of Defense.

Much of the firefighting is focused on the area west and northwest of the village in an effort to keep the fire from jumping US 264 and entering the community from the north.

In working to predict fire behavior, Greathouse said that he considers both fuel conditions and weather. Of added concern with this fire is the large presence of peat - organic matter that burns down into the ground until it reaches the water table. The ground fires tend to spread out as they burn underground and can resurface at considerable distances from the point of origin. Because of the drought, the water table is down 17 inches.

Using pumps and sprinkling systems, the water table is being brought closer to the surface in the areas where availability of water and accessibility for fire vehicles allow. Specific areas are flooded and then drainage canals are dammed to keep the water level high.

When fires run up trees and reach near the top, "sloughing" can occur. This is when pine cones and other burned debris fly through the air. "This ... could send slough a quarter mile away," said Greathouse.

Although the region often has high humidity, it doesn't help the way it does in the western part of the state, said Greathouse.

A bit of good news delivered by the fire behavior specialist is that a cold front is expected to come through on Sunday, and with it perhaps a little rain. The winds next week are expected to shift to the northwest, which will bring some relief from the smoke, which not only has impacted the mainland, but also Roanoke Island and the Outer Banks.

Greathouse also noted that "super fog" can be a serious problem. "It's like driving through milk," he said. The mixture of fog and particulates from smoke are the ingredients that make up the phenomenon. Moisture attaches to the smoke and creates a white-out type condition.

Brandon Moore, National Park Service ranger from the Everglades National Park in Florida, told the crowd that he knows first-hand the dangers of driving in super fog. Moore is head of security for the fire and spends his time from the afternoon of one day to that of the next, driving back and forth on US 264 between Stomper Road near Hyde County line to the junction of US 264 and US 64.

Moore, who is authorized to shut down access to US 264 from Stumpy Point to Stomper Road, looks for safety issues such as dense smoke, super fog, firefighting activity taking place along the road, and even fire.

"The purpose of the closures is to ensure the safety of the firefighters and the public," said Moore. If he finds safety issues along US 264 between Stumpy Point and Manns Harbor, he notifies the Dare County Sheriff's Office, which has jurisdiction over that portion of the highway.

Both Moore and Greathouse were emphatic about the need of motorists to pull over to the side of the road and put on their vehicle's flashers if they find themselves in super fog.

Early last Tuesday morning, a super fog formed that was so dense that, Moore said, a fellow law enforcement officer patrolling the road had to wrap a towel around his head and mouth and open the vehicle door so that he could use a flashlight to try to find the center-line to assure himself that he was on the highway.

When Moore encountered the super fog north of Stumpy Point, he immediately called Dare County Central Communications to report the problem. The road was closed and residents of Stumpy Point were kept in the village until 9 a.m.

Super fog isn't the only hazard, said Michael Good, of North Carolina Forest Resources, who is the fire's field operations chief. As ground fires continue to burn tree roots, there is growing concern about firefighters' safety related to falling trees. "Some trees have three feet of roots exposed because of the ground fire," said Good. "We are trying to stay away from those."

Good said that much of the smoke is coming from the ground fires. Although it is difficult to come up with an estimate, he said, there appears to be about 3700 acres of ground fires, most in the southern portion of the fire footprint.

Roads are being used as containment lines - in areas that have roads. Much of the interior fire will have to burn itself out, because there is no way to access it safely.

Greathouse noted that there seems to be some confusion about the word "containment." That isn't the same as control. Containment is establishing a line around the fire. Control is being able to put the fire out. The fire is 75 percent contained.

sandy@obsentinel.com
Posted by Rick Rosenshein at 8:11 PM 0 comments Links to this post