Unfortunately as a kid I never was able to get Orthodontic work done on my teeth. Had I got braces way back then I might not have some of the issues that I have now.
This is one of those embarrassing blog entries that one wishes would never be made public but like some of my past blog entries such as my Prostate Biopsy entry, I consider this a PSA type of thing.


After 61 years of devoted service, this is what my teeth look like. As you can see the bottom teeth are a mess. Even after wearing a night guard for about 2 decades it just wasn't enough for my teeth to wear down, become jagged, be a different heights and in the case of those 2 bottom teeth...become nothing more than little nubs.
Earlier last week I noticed that something was going on with one of those little nubs. I ran my tongue over my left toothy nub and it felt like a piece had broken off and was a little more sensitive than it usually was.  Since we would be going on vacation in a little over 2 weeks I decided it was time to get into the dentist in hopes that they could slap on some sort of patch or filling type material that would buy e some time until we returned from vacation.
I was lucky enough to get an early morning appointment with my dentist. After a few glimpses and an xray or two it became clear that my options had become limited. There was some brief talk about pulling the front nubs or possibly the front lower 4 teeth and then get a bridge. Although a bridge would have been much cheaper than the other possible option, after discussing the pros and cons of a bridge, I decided to go with the much more expensive route...
root canals for those 2 nubs and then crowns for those nubs and a crown for each tooth on either side of those nubs.

After getting my gums really numb my dentist began cleaning out the canals and nerves of both teeth. 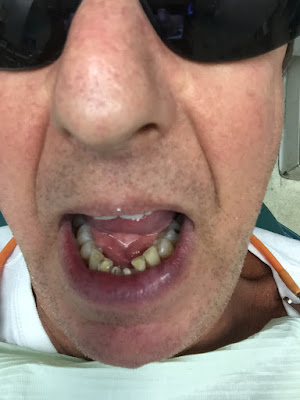 The same basic procedure was done to both of my toothy nubs...a small access hole was drilled in the biting surface of each nub and through this hole the pulp chamber and nerve were totally cleaned out of the tooth.  As it turned out the nerves of my right nub of a tooth was dead and was much easier to deal with than the left toothy nub. The left toothy nub was finally cleaned out. Both teeth had canals filled with root canal fillings and sealers.  Root canal fillings are selected that will exactly into my freshly prepared canals. A rubber like material called gutta-percha was used to fill the canal space. Gutta-percha is a thermoplastic material that was heated and then compressed into and against the walls of the canal to seal them. Adhesive cement called sealer was also compressed into each canal. Between the gutta-percha and the adhesive sealer the canals were sealed thus preventing any bacteria from entering the canal space. 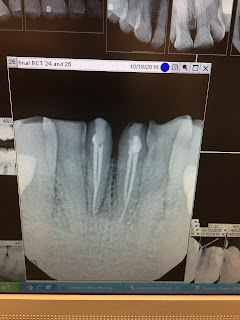 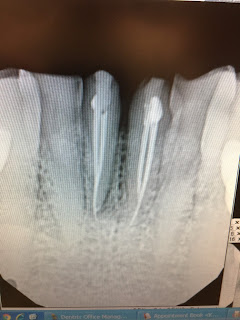 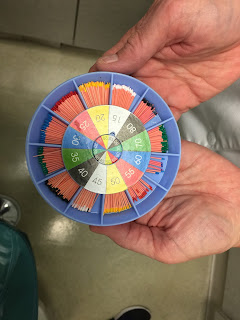 Both bottom and top impressions were taken...the bottom impression was taken for the making of the crowns and the top impression was made for a new night guard after my crowns have been put on.
After returning from vacation I will return to the dentist office to have the temporary crowns put on and then a couple of weeks later the permanent crowns will be put on.
After all of this is said and done I will take another photo showing the difference...the before ad after photos.
Posted by Rick Rosenshein at 7:56 PM 0 comments Links to this post