Modern Technology For All Of Our Travel Needs

Since Veronica and I have decided that we are going to be doing some serious traveling abroad in the future, we decided to make an investment in our travel plans. It never ceases to amaze me of all of the technology that is out there.
Below is the new "toy" that we purchased...our new Ectaco ITRAVL Talking Translator and Dictionary. This item is so much more than just a translator and talking dictionary. But before getting into what this little gem can do, let's see what came with our package. 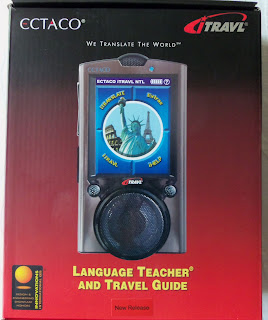 Below is what came with our package deal. There is another stylus and cd that isn't present in the photo. We got 2 different styles of protective covers, an extra rechargeable battery, docking station that you can use when recharging both batteries, AC charger, several different headphones/earphones, a set of world travel adaptors, a couple of language program CDs for the computer, a special C-pen, a free 10 language world translator(the white thing in the photo...plus several other items 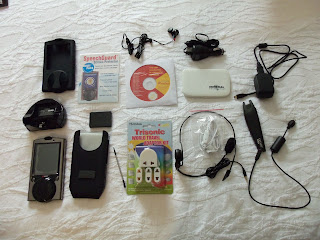 Our unit has 13 languages built into it including English. The languages that are in our unit are: Arabic, Chinese, Farsi, French, German, Italian, Japanese, Korean, Polish, Portuguese, Russian, Spanish along with English.
Built into this unit are a Dictionary, English Dictionary, Pictured Dictionary, Text Translation from any of the above listed languages into another of the above listed languages, an Audio Phrasebook that covers many highly used phrases from travel, hotel, food/drinks, health/drugstores, shopping, sports/leisure, repairs/laundry, emergencies, in the restaurant and so much more. And each of these sections are covered in all of the languages within this unit. 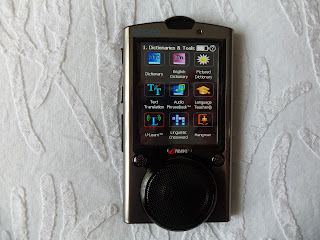 There is text translation from any language to another that is built into the unit. Just type in the word or sentence and it will translate it into the language requested, which cab be either visually read or verbally spoken to you from the units speaker. There are also language teaching programs within this unit. They have language crossword puzzles and even hangman included in the unit. ﻿ 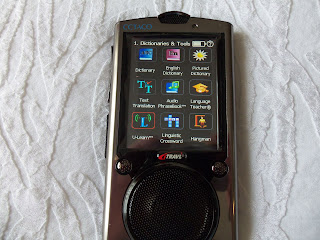 On the front of the unit, they have what they call "soft buttons" that you can press to move to the next "page" on the units interface. On the 2nd page you can see other things that this unit has built into it. There is a video player, audio player, a jtBook reader, a voice recorder that records notations or anything else you want to record onto the provided 512mb SD card which can be expanded to a 2gb card. Also built in is a Audio Books feature, World Time, CIA World Factbook, Cultural Notes and a Navigation (GSP) feature. 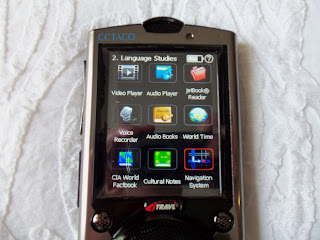 On the 3rd page of this units interface, you have the Extras area. For extras they have an IHelp section, a calculator, a calendar, size equivalents, metric conversion and a Notepad. The IHelp section is really kind of cool for emergency situations....instant communication help. All you do is say a short name for any pre-programmed phrase(s) and you can get an instant translation and voice output in the foreign language that you choose and is built into the system. This gives you emergency communication with doctors or police or any other number of people that you would like to communicate with in an emergency situation.
To get into any section available, you can either use the stylus provided or you can tap on the screen. The unit is built on a Microsoft Windows CE operating system. 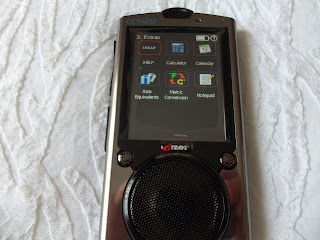 Here is the unit in the supplied cradle which you can hook up to you computer or with the provided AC adaptor. There is a spot in the back of the cradle to hold and charge the spare battery. The little bump at the top of the unit is actually a microphone to speak into and the larger circular area at the lower section of the unit is its speaker. Almost everything you can do with this unit is via speaking into it although you can also use the virtual keyboard to type info into the unit.
It has a text to text feature built into it where you type a word or sentence into a box and it translates the writing into whatever language you choose. The same can be done for verbal communication to a point. 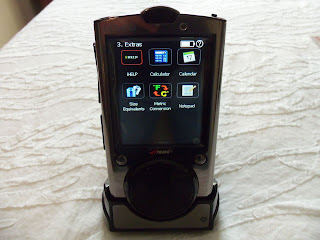 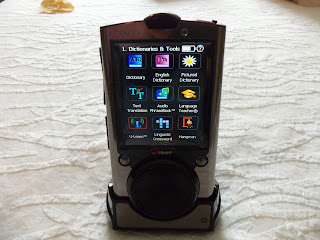 The unit came with built in GPS software for the United States and Canada. Veronica and I also purchased the GPS package that includes both Eastern and Western Europe but does not include Russia. The GPS software has plenty of different options to give you directions and pictures so that you can get where you want to go. It even has a feature where you are almost looking at your map interface from a ground level viewpoint. 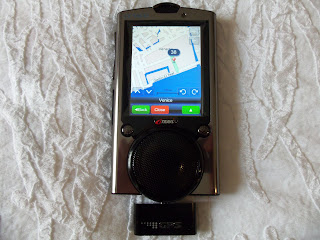 This unit came with what they call a C-pen. This is a really great feature. The C-pen plugs into the unit at the bottom in the same location as where you would plug the GPS unit in. When you plug the C-pen in, the C-pen interface shows up on the screen...see below photo. What you do is you choose the language that you want to translate into English. Let's say that you are looking at a restaurant menu in Venice Italy and you you don't read or understand any of the Italian written language. You take your C-pen and press the pen down and over the sentence or word that you want the unit to translate into English. The tip of the C-pen lights upon the area that it is acquiring. The Italian text will show up as it is actually written, in the top box on the screen. You then tap or use your stylus to press the "translate" tab and the next thing you know, the sentence on the menu is translated into English in the bottom box section...if that is your chosen language. After translating that sentence, you can either delete it or continue with the translation of any of the sentences that follow after the initial one. This is very helpful on menus because many times the description of the food is written in multiple sentences. You can use this on travel directions that are in a foreign language. There are numerous uses for this pen.I think that this particular feature is really great. I also like the fact that this unit is great for verbal communication either through actually taking into the unit for phrases and such along with typing information, sentences or words and the unit can verbally translate what is written into whatever language you have chosen.
This unit also has teaching software included within the unit to assist in you learning a new language...which ever language you choose from the ones that are built into this unit. There are so many more features that this unit has...too many to mention here. 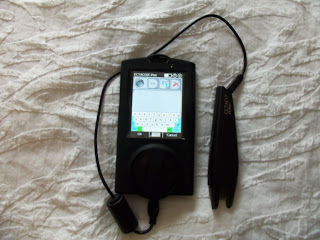 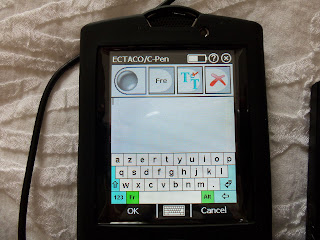 ﻿The purchase of this unit will give Veronica and I the freedom to easily communicate and navigate in many countries that we want to visit. This unit was costly but I think it will be well worth the money as we do more and more traveling. For more information on products from Ectaco, please follow this link...   ECTACO
Posted by Rick Rosenshein at 6:09 PM 2 comments Links to this post