Who Says Doing The Laundry Can't Be Exciting

This morning Veronica and I decided to do some laundry. We wanted to wash some of the numerous comforters, blankets, mattress pad and bedspreads that we either had on the bed or had been stored away in the attic.
About 2 years ago, where a Shell gas station had closed down, a new laundry center had been built.
This "laundry center" is called Soap-N-Suds.
When we were on our way there, I was ready for the usual laundromat experience.
You know the experience...noisy, high humidity, sensory overload...a mixture of smells some of which include wash soap, dryer sheets of every possible flavor and overly dirty cloths...some of which should have been washed years ago.
Of course every once in a while, you catch the whiff of someone bringing in an old pup tent, that their cat had found all scrunched up in a corner of their garage and decided to make it it's own personal litter box...you know...that unforgettable old stale cat urine smell.
Well let me tell you folks something. Upon entering this "laundry center" as they call it, I found myself blissfully walking into laundromat utopia.
I know...I can hear all of you saying....Rick...have you been noshing on those 'shrooms" again.
Not this time folks. I can honestly say that this place was actually fun to be in and made washing your clothes kind of enjoyable.
This place is called Soaps-N-Suds.
This was one totally automated computerized laundry cleaning center.
To start this exciting washing process, one must go to a automated touch pad screen and purchase a SNS Laundry Center washing card. Your initial card cost $1.00 and then you can add money onto the card either by inserting cash or by swiping a credit/debit card.
Then you have to decide what size washing machine that you want to use. A majority of the washing machines were front loaders. They did have a few top loaders..the ones you usually see in a normal laundromat, but they were few in numbers and kind of shoved to the back of the large laundry center.
Each machine had some type of automated card reader in the front of each machine and each machine, depending on size and how much laundry it holds would dictate the price of washing a load of wash. They had double loaders, triple loaders and then the giant mogumba loader which held 8 loads of clothes.
Because of the size, weight and amount of items that we had to wash, we ended up using a double, a triple and one of those mogumba giant front loaders.
Now at first the cost of a load of wash was enough to make your heart skip several beats but when I thought about it further, a little over $8 was not bad for the huge front loader, especially since it held 8 loads in it and we packed it pretty well with stuff....which came out to $1 a load.
This huge front loader had a drum which must have been about 4 foot in diameter.
Although the price seemed rather steep for the washing aspect, the drying was very reasonable.
Once again they had several sizes of dryers to pick from. Each dryer cost a specific amount per until. A unit equaled 10 minutes.
The largest dryer cost .63 cents per unit where the smaller dryers cost .44 cents per unit.
I was pleasantly surprised to find out that 1 unit dried quite a number of items without the need to use further units.
Like I said earlier, each washer and dryer had an automated box in it and all you had to do was to slide your washing card in and out of the box and it read how much money you had on the card and subtracted the washer or dryer amount from the card.
If you needed more money on the card, you went back to the main automated touch pad screen and put additional money on your laundry card.
Not only was this place big, it was extremely clean, had a laundry attendant on premises to help out those who are automated touch pad screen impaired (me) and even had 4 large screen televisions hanging down from the ceiling. They even had an approximately 60 inch Vizeo LCD TV and had Direct TV on all of them.
Veronica and I were so impressed with this laundry center, that when we got done doing our initial loads, we went home and grabbed all of our Winter coats and another comforter, came back and did some more washing.
We got everything done, all of the washing, drying and driving time in 2 1/2 hours...very impressive indeed.
I usually never get excited or have fun doing laundry especially at a laundromat but let me tell you, this was a rather enjoyable experience.
It doesn't take much to keep some people entertained and today, I was one those people. 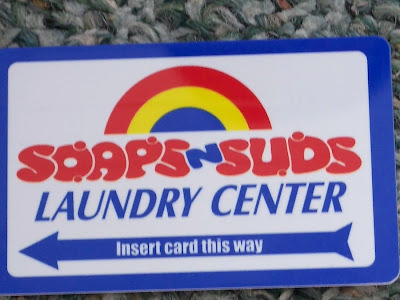 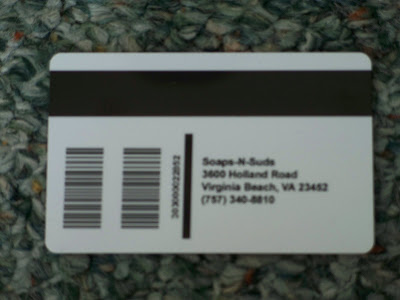 Posted by Rick Rosenshein at 3:48 PM 2 comments Links to this post