Yesterday we finally passed inspection after having a punctured gas line in the attic and having it spliced and the damaged section replaced. We have hot water and the other furnace running again.
The new roof has been completed and a new sky light installed.
Next will having all exterior wood trim and the soffit wrapped .
Our Home Owners Association has approved our choices of exterior paint colors and our request for the Generac whole house backup generator..Guardian Series 22Kw. Once we get the unit installed whenever the electricity goes out there will be a brief delay and then this unit will kick on. It runs on natural gas and will kick on automatically whether we are home or not. It is the largest residential size in the Guardian series and can run the whole house including our 2 zone HVAC system.
We also have the actual exterior painting to get done now that the colors have been approved.
This next group of projects will take a couple of months to complete but we are getting there.
Posted by Rick Rosenshein at 5:13 PM 0 comments Links to this post

Today ended up being one of "those" types of days. The roofers are busy doing their thing. The people who installed our master bathroom shower come by to replace the shower door because the glass is warped. I let them in and take them to their work area. I go upstairs to grab something and as I enter my office area, I smell gas. As the smell is getting stronger I opened the attic door which is on the back wall of my office area. I walk into the attic and the smell of gas is really strong. I hear a hissing sound. I gingerly move my way towards the hot water heater and the furnace. I locate the general area of the hissing sound and discover that it is coming from somewhere above and behind the furnace. Now I am starting to get a little nervous. I carefully go out of the attic and go downstairs where the workers are in our master bathroom. I explain that they need to leave the house ASAP. After quickly explaining the situation they leave not only the house but the property. Can't say that I blame them. Now I need to get all of the roofing crew off of the roof and away from the house. I then call 911 and explain what is going on. Within a few minutes a hear the sounds of emergency vehicles heading my way. Shortly thereafter I have a total of 3 ladder trucks and another fire vehicle on scene. After I explain what is going on they gear up and head into the house. Must have had 6 maybe 7 firemen in the house. After several minutes I see a huge fan being put at our front door pulling air our of the house.
As it turned out...the roofers just happened to put a 1 1/2" nail through the plywood and into a main gas feeder line. Actually it was not the roofers fault. The gas line that they hit was an original line from when the house was built back in 1995 and a portion of the line was attached to where the roof and a beam meet. Whoever ran the line did not leave any space and had it attached right up into where the roof and beam meet...against code and not legal at all. The roofer could have put a nail a half inch either way and totally missed this line but unfortunately it didn't happen that way. Where the line was punctured is not in an accessible area. At first we thought we would have to cut a whole in the new roof to gain access and somehow splice a new pipe in where the punctured pipe is. Luckily the tech who came out to the house decided to try to see where the pipe went by going through an access point in the ceiling of out kitchenette area. From that vantage point he could see where the pipe came out and will most likely be able to run a new pipe from a t-valve and feed the gas line back towards the hot water heater and furnace. Not a cheap fix that's for sure but much cheaper than all of the alternatives. The tech will be back tomorrow after he obtains all of the materials needed to do the job and then we need to have an inspector come back out and sign off n the work. So until then we have no gas stove, no furnace and no hot water heater. Luckily it warmed up so no furnace is not a big deal at all.
Due to the break that they had to take while the firemen were doing their thing the roofers could not totally complete their job. Shingles are up but still a little more work needs to be done tomorrow.
And the shower door people that I chased out will be returning on Friday.
Hours later I could still smell gas faintly in a closet and back bedroom area.
It sure could have been a lot worse.


Below are various photos showing the gas line and how is was placed rights next to where the roof and beam meet. There is supposed to be several inches between the line and roof and beam...not attached directly to both where the two meet. Somebody was just plain lazy. 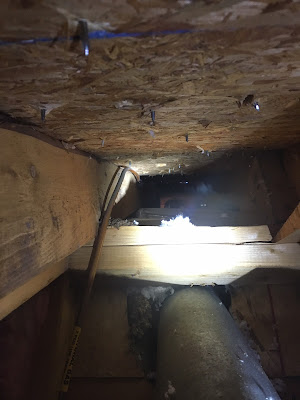 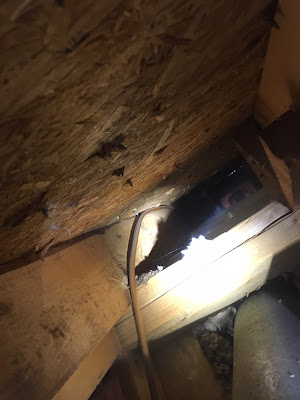 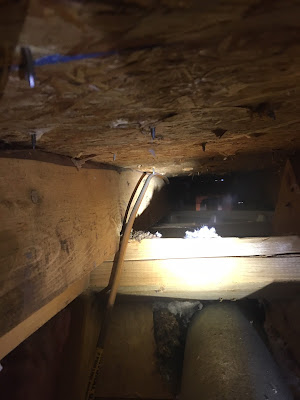 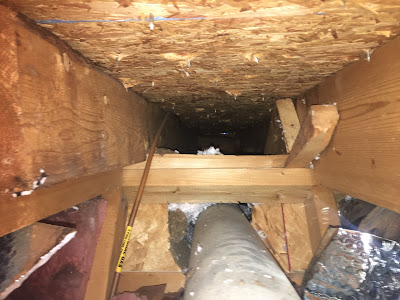 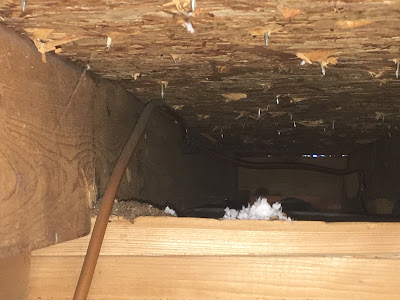 Emergency personnel at the scene 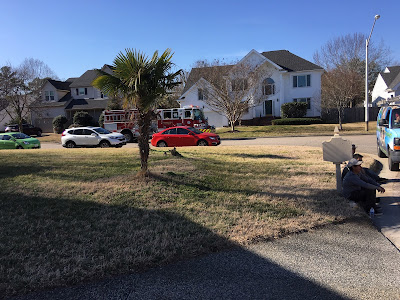 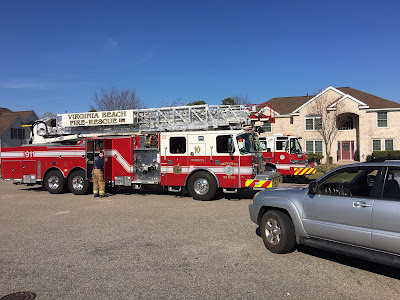 Posted by Rick Rosenshein at 8:29 PM 0 comments Links to this post

A New Roof Is Going On Today

I was up before the sun today to move a few cars around and get them out of the garage and driveway.
Why all of the early morning commotion? Because today a new roof is being put on the house. At 7AM I had a caravan of trucks and workers arrive at our house and they wasted no time getting to work.
Looks like I have a crew of 6 up there but it sounds like 20 people are working above us.
It is going top be a very long day of scraping, people walking above us, pounding and the sounds of numerous air driven nail guns going off.
I might have to get my noise cancelling headphones out so I can enjoy a little piece and quiet. They are supposed to get the house done today and will come back to do the shed. Here are a few early photos of the work site:

This is the before photo of our house. The big partial tree that you see to the right is the one that was blown down onto the roof which led to us discovering additional damage to our roof 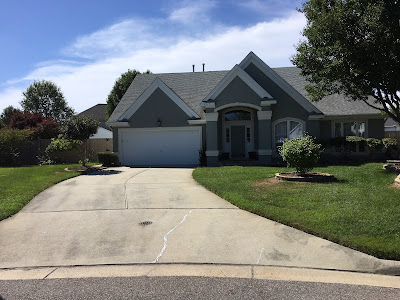 2/5/19 and it has become warmer. Supposed to be 69 degrees out. Good weather to replace a roof. We were waiting for a break in the weather to get this done and the break finally arrived. 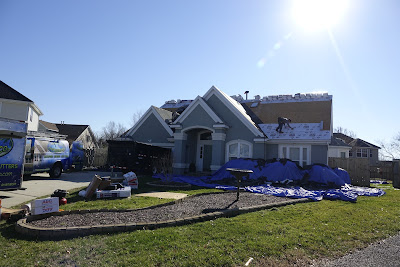 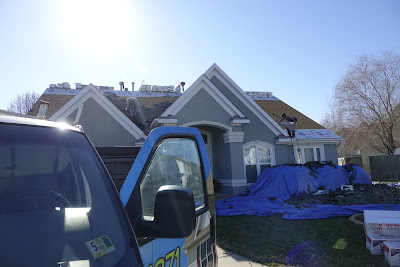 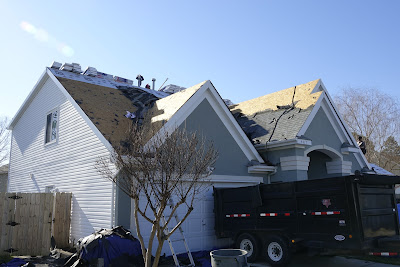 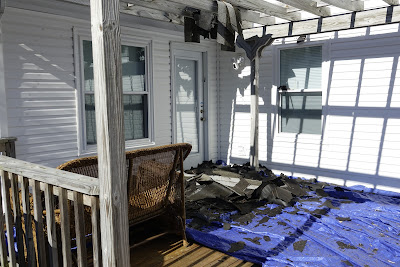 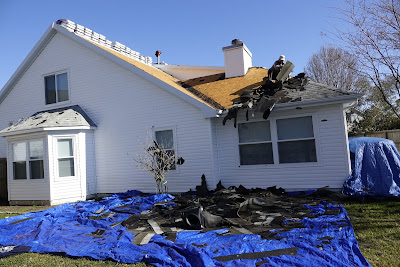 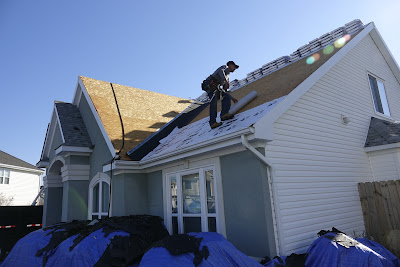 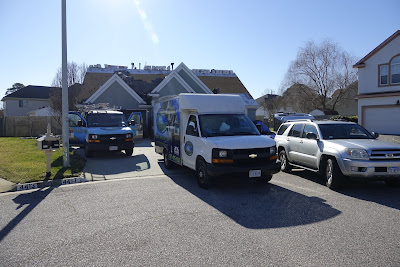 Posted by Rick Rosenshein at 10:57 AM 1 comments Links to this post

Working On The Exterior Projects

We have been trying to line up all of our exterior projects for the home but it is going slow.
We chose the exterior paint color for the house but are awaiting the approval of the Homweowners Association.
We also sent in plans and an application for a whole house Generac backup generator. We are awaiting to decision on that project from the HOA too.
We got approval from the HOA on the roof and gutters but due to the weather those jobs are having to wait. We are in the queue along with about 6 others to get this job done. I was told that it is a 1 - 1 1/2 day job to do the roof itself.
They have a whole crew come in and do the job. Our neighbors had theirs done and they had about 10 people in the crew.
We aren't planning on having the front of the house painted until March or April.
Other than that not much is going on. After a 6 month renovation/remodel we are just slowing down a bit and relaxing.
Once Spring comes and the weather warms up I will get outside and get some work done but for now I am just going to take a little break.

Posted by Rick Rosenshein at 10:25 AM 0 comments Links to this post