Last night Veronica and I went to the highly anticipated and long awaited Jimmy Buffett concert.
The excitement for this event was so thick, you could have cut it with a knife.
Veronica and I checked into our Homewood Suites room around 3PM. After spending about 90 minutes taking it easy and then dressing for the concert, we headed out around 4:30PM.
We figured that we would leave a little early for the concert figuring that the traffic was going to be brutal and backed up for miles.
We were very surprised when we saw that the traffic was moving rather quickly and even more surprised when we were parked in the lot, surrounded by tailgaters and party go-ers dressed in the finest parrot-head garb, shortly after leaving our hotel room.
This was the first time that Veronica and I had ever done a "premium package" for a concert.
We were able to park very close to the VIP Club entrance.
As it was rather warm out still, we decided to hang out in our car, with the a/c on and take in all of the festivities going on all around us.
We were allowed into the club area at 6PM. They had several bar areas, lots of chairs that were placed around many separated tables and there was a small pond that had a fountain in the middle of it.
After having a couple of diet soft drinks and some nachos(which took forever to be delivered to our table), we  decided to head into the main food, drink and souvenir court area. It wasn't hard to figure out which stall was selling Jimmy Buffett t-shirts and ball caps. It was the one with all the people in various lines, awaiting their turn to make their choices and purchases.
Veronica and I got in line and about 20 minutes later it was our turn to shop. We each picked out a favorite t-shirt that we wanted from about 10 styles and I also decided to get a deep blue ballcap with a colorful Jimmy Buffet embroidered on it along with a colorful parrot. On the back of the ballcap was the words "fins up" with the outline of a shark fin on it....classic Buffett stuff.
Veronica and I then proceeded to our box seats which were almost dead center to the stage.
At some point in time, Veronica ordered a frozen margarita. Veronica's drink arrived in a clear tall plastic container that was in the shape of a guitar. Veronica told me that it was the best tasting margarita that she had ever had and for the $19 it cost us it should be.
As the time was getting closer for the concert to start, the seats began to fill and the festivities of Buffett concerts began. Beach balls were being tossed everywhere and it was great to just kick back and people watch...especially those dressed out in parrot head garb. There were even a few pirates and damsels in the crowd. One guy that was dressed as a pirate looked a lot like the Jack Sparrow character in the Pirates of the Caribbean movie series.
They ended up being right in front of the stage and were shown on the jumbotron screens several times during the concert.
We could not believe how many people were in the lawn seating area. It was just a mass of people everywhere you looked.
Jimmy Buffett was making his return to the Virginia Beach Verizon Wireless Amphi-Theater after an 11 year absence and the crowd gave him a huge resounding welcome.
The concert was great and a lot of fun. It was an amazing sight watching everyone dancing and singing, arms in the air, beach balls being tossed around everywhere...just a lot of energy. The joint was hopping to say the least.
The concert ended around 10:30PM and Veronica and I made our way quickly to our car so that we could try our best to beat the traffic jam that was sure to happen when the thousands and thousands of fans made their way out of the area.
Unfortunately we ended up getting caught in a bit of a traffic jam as we tried to leave the parking lot.
As we stood still waiting for the traffic to move, we saw a huge tour type of bus being lead out of an auxiliary road in the parking lot area and it was being lead by a police escort with lights flashing.
Jimmy Buffett and the Coral Reefer Band had already lifted their anchor and were sailing off to their next port of call...which we believe is Nashville.
And for Veronica and I, well....we set sail for our next port of call...the Homewood Suites, where we dropped our anchors for the night.
This concert had been on Veronica's "bucket list" for quite some time and I was so happy to be able to share this special event and time with her.
It is a memory that we will share together for many years to come. 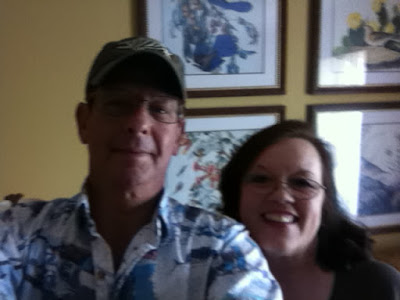 Veronica in front of the VIP Club entrance 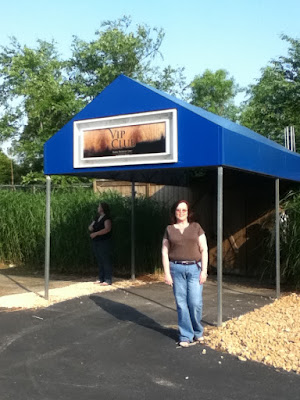 Veronica in the VIP area where they serve drinks and food. Water fountain in the background is in the center of a small pond﻿ 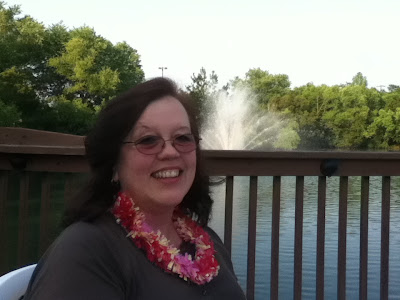 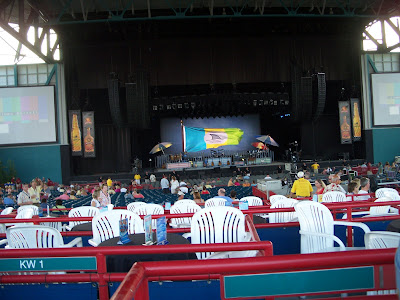 Here is Veronica with her dream coming true 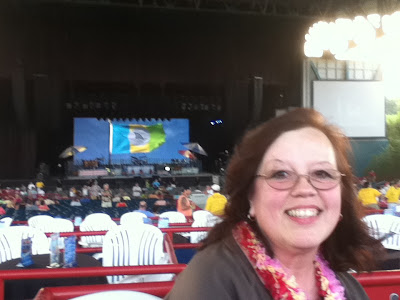 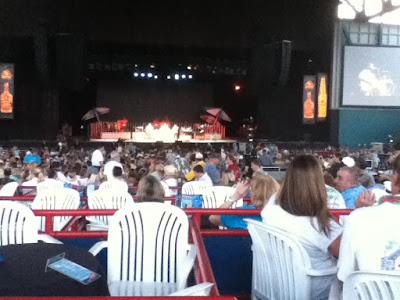 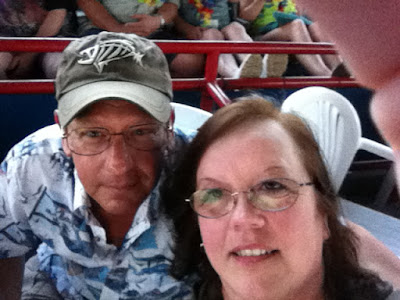 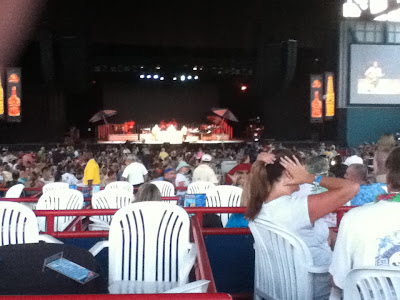 Just a sea of humanity as far as your eye could see...lawn seating at its best 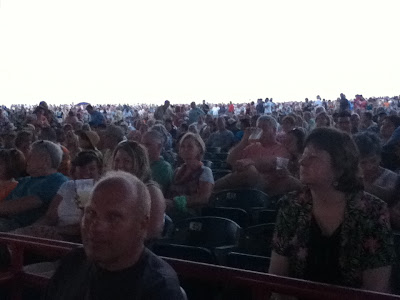 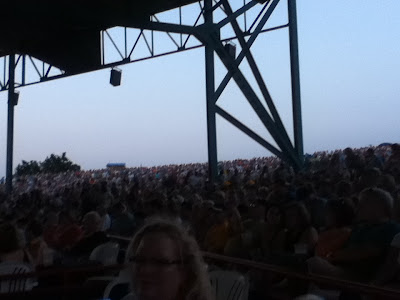 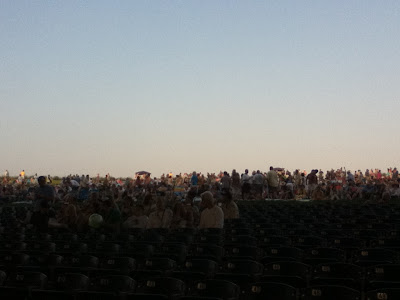 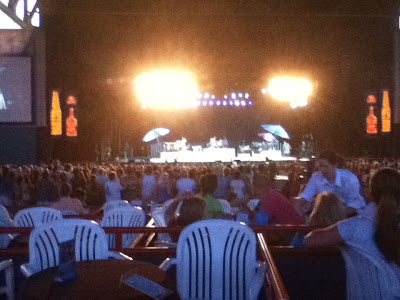 Below are the best photos that we were able to get at the concert. We used our old Kodak camera and had to hide it in between photos because they were really watching out for those that were photographing and  taping the concert. One trick that the lighting people do is to have the stage lights aimed out into the audience, making it difficult to take many high quality photos. We had to take them when the opportunity offered
itself. 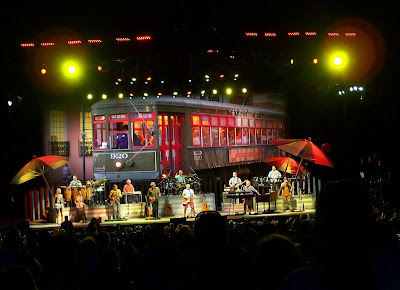 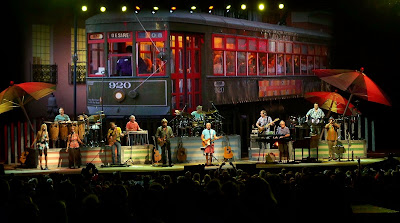 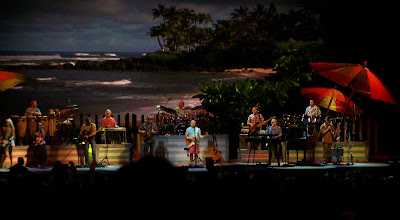 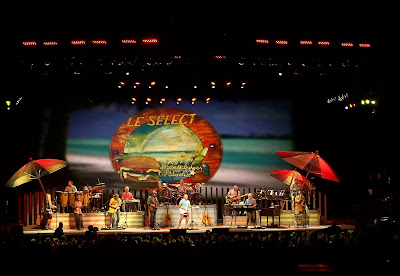 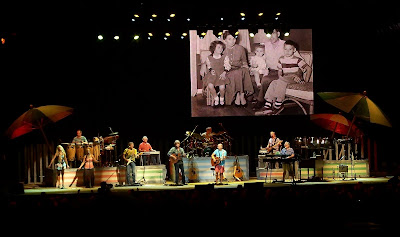 ﻿
﻿
Below are some videos taken during the concert. Sorry that the quality is not better but it was tough just to get what we were able to get.
﻿
Posted by Rick Rosenshein at 7:53 PM

Rick , Wow! what a great time you guys had,. You both look so happy, that makes my day... thanks for sharing and you are in my thoughts...
Hope to see V here in Orlando, I can't wait ...BJ

Rick,
Glad you had a nice time at your concert! I'm sure this experience was closely akin to when I went to my Elton John concert a month ago. Glad you had fun!

Whoo hoooooo .... looks a lot like the Tampa Ask Gary Ampitheater where we saw JB. I know you guys had a GREAT time! Most amusing, I thought, were all the parrotheads in their attire. Glad you finally got to go ....