A Houston woman, Sheyla Hershey, 28 years old is going for the worlds record for the biggest breasts. According to Guinness World Records, the current record for the worlds largest breasts goes to ....drumroll mistro.....a porn star by the name of Maxi Mounds...duhhhhh who wooda thunk that. Originally Guinness did not have a catagory for the largest breast implants until Ms. Mounds plopped her 36MMM, 20 pound implants (each one) into the Guinness ring. Now back to Ms. Hershey who is trying to fill her way into the Guinness record books. Mrs. Hershey has had 11 breast augmentation surgeries since 2001. All of which have been performed in Brazil. Mrs. Hershey can't get the implants done in the U.S. because she is already over the maximum allowable size as regulated by the U.S. Food and Drug Administration. The FDA can keep track of ladies breasts size but can't do squat when it comes to tainted peanuts and peanut butter. I apologize for my digression. Currently Mrs. Hersheys breasts are at the 38KKK mark and she claims Brazils equivilant to the Guinness Wolrd Record. Now I am not a rocket scientist nor am I an expert on all things mammary BUT I have played a little poker in the past and I am sure that 3 Ms beat out 3 Ks all the time. And just for the for record...I might be a somewhat typical male but neither of these sizes appeal to me. I might prefer large breast but I don't want to have to use 2 weeks of vacation time just to circumnavigate a pair of MMMs. I just wanted to set the record straight on that point. What is really sad is that these women will only be remembered for
their breast size, not for who they are as human beings.
Below is Maxi Mounds 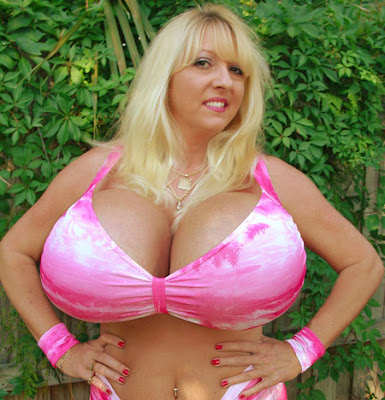 This is Sheyla Hershey 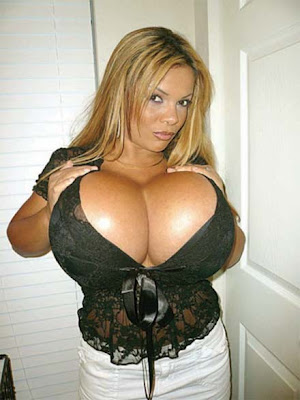 This is both of them in 40 years 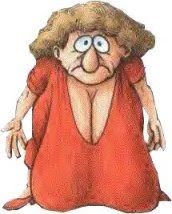 Posted by Rick Rosenshein at 10:18 AM

Size does little for me either.

I hope her 15 minutes of fame are worth the pain and expense.

Size does matter, I have breast implants, normal size, certainly not the huge ones these ladies are going for, but guys look at me differently since I have larger breasts. Why not include a photo of these...ladies? Then we can all be appauled. :) Thanks for being kind, but MOST men prefer larger breasts, not misproportioned and 'Dolly Parton' size, but full. Thanks.

Ha-ha, I love the last photo the best. :) Poor ladies, how sad, and they think that's pretty, that is not even Dolly Parton. My goodness, that is disgusting. Pathetic things sure can't sleep on their stomachs. Sad. Thanks for the ridiculous photos, WOW, crazy!

Wow, I'm just stunned. How can a woman look at herself with those jugs and even begin to think that is attractive? I'm just dumbfounded.

Your cartoon at the end sums it up (or down in this case) perfectly!

wow! madness.. do they actually have to do that?! nice cartoon ha!

I think these woman are quite sick! they should be happy with what God gave them. As there are way too many woman out that that have battled breast cancen and have had to have them both removed. wake up ladies.
Dottie

LOL. That is so many types of wrong. Funny as hell, though!

I wonder if Guinness has a page for smallest breast? I could apply immediately. This is just ... nuts. Nuts because it's probably dangerous to the physical self to undergo so many surgeries; nuts because it's somehow evidence of a psychology -- er -- sidetrack to be so obsessed. Large breasts or small, they can all be lovely -- women are just never 'allowed' by the media in our culture to be happy with what we've got. It's always women, too -- where are the men who are getting ridiculous penile implants, with accompanying photos?

who need that kind of size?it turn me off!

OMG that hurt me just to look at them. No offense to large breasted women but I'm a proud lifelong member of the IBTC :D LOL

I don't get that obsession... I mean such a size can't be anything else than inconvenient. Plus, it looks ridiculous...

OMG!!! they could have shared a little of that over my way! paid for my college tuition, a little splurge towards health insurance, etc. ... So selfish! In many many ways!

You people are being way too judgmental. I've corresponded with Maxi and she's really nice, so lay off.

They look amazing. Big breast=sexual power for women. These women are next to immortal. You are all just jealous!

yeah....like we aren't allowed to have opposing opinions without being jealous. To the person who called us all jealous for being disgusted by this mockery of the female figure, get a grip. We aren't jealous, we are horrified. And big breasts do not equal sexual power. Sexual power equals sexual power. Women with implanted MMMs and KKKs lack that power and any other kind and feel the need to overcompensate. Notice all the men are equally appalled as well. Think about that.

Toni, you made me laugh. I wish that people would understand that what these women have is equivalent to what anorexics feel. Anorexics have to make themselves thinner and thinner and they still feel they are fat and unattractive. Women who have to have bigger and bigger breasts are never happy with the size because they have low self-esteem for how they look. It is very sad. They need psychological help and by people saying they are ugly, just confirms how they feel.